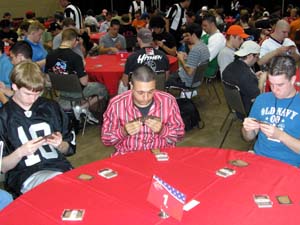 "Could you take this pod, Sam?" I asked English National Team Member and pseudo-American Sam Gomersall, who was once again allowed entry into our fine country, though they appear to have stolen his luggage as a tariff.

Patrick Sullivan confessed coming into the draft that he knew he was going to be drafting black cards, it was just a question of whether or not he'd be pairing red or blue with them. Godo, Bandit Warlord, Yamabushi's Flame, and Soratami Rainshaper greeted him in pack 1 and he immediately threw the removal spell into his pile. Pack 2 was a whiff, giving Kashi-Tribe Reaver, Sakura-Tribe Elder, Kami of Ancient Law and no playable red or black cards, forcing Sullivan to put the Elder in his pile.

Kami of Fire's Roar, Kami of the Hunt, Brutal Deceiver, Gibbering Kami, and Reciprocate, were there for the next pack, and Pat chose the Red Kami. Cruel Deceiver was picked out of pack 4 when again there was very little in his colors to entice, including a lack of good green cards this time. Pack 5 delivered a Feral Deceiver, a card that has gone down in value in the last two packs, but still a welcome pick in the absence of anything else reasonable. Ember-Fist Zubera, another Tribe Elder, and Brothers Yamazaki were the options for pack 6, giving Sullivan a second mana snake. Brutal Deceiver in pack 7, nada out of Pack 8, and Gale Force from pack 9 rounded out the notable cards from Champions of Kamigawa. 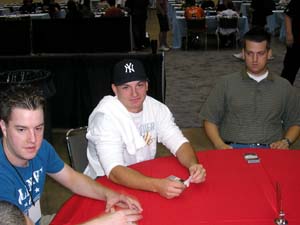 In front of Sullivan, Michael Patnik was firmly entrenched in blue/black, though he flirted with some white cards like Kitsune Blademaster early in the draft. Fabiano was in black-green after pack 1, meaning it would be a mistake for Sullivan to move into black, but the other colors were at least somewhat open.

Final Judgment was delivered unto Patrick's hands in Betrayers, but the former TOGIT owner shipped it on in favor of Lifespinner, in spite of the fact that he had two Elders to help with any move into white or the double splash. Since he had shipped some solid white cards early, he expected Gerard to be in white, meaning even if he moved now he likely would not see many great pale Betrayers cards, and Saviors is relatively poopy in terms reasonable white picks outside of Charge Across the Araba.

Child of Thorns made for an underwhelming second pick out of the pack, and Pack 3 gave Patrick a tough choice between Cunning Bandit, Patron of the Akki and Bob Gnarly, with the Akki Patron ending up as the clear pick. Scaled Hulk fit the plan for pack 4 over Sakura-Tribe Springcaller, with Moonlit Strider and Ninja of the Deep Hours still available. Frost Ogre was an easy choice from pack 5 before Matsu-Tribe Sniper, Frostling, and Sosuke's Summons appeared in pack 6 and Sullivan made a surprise choice, grabbing the Frostling and shipping the Sniper along. 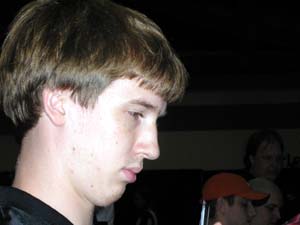 He shook his head sternly at a very late Split-Tail Miko in the next pack, perhaps ruing the choice not to dip into white with the gift of Final Judgment, but it was too late now, as Sullivan added another Ogre and a First Volley to his stack out of Betrayers.

Sullivan was clearly miffed when Celestial Kirin greeted him out of Saviors, thumping the card angrily before putting Barrel-Down Sokenzan in his stack. Two rare Wrath effects passed, though thankfully to either side of him and not in the same deck. Patrick grabbed Barrel-Down number two over Elder Pine of Jukai in pack 2, and then a third one over Haru-Onna in pack 3, figuring that removal spells are good, right?

He then passed on the chance for a fourth one to take Shinen of Life's Roar, slowly turning a rather crappy draft deck into at least something playable. Sokenzan Spellblade made the stack over Oni of Wild Places in the next pack and was joined by a twin from pack 6 and then a very late Elder Pine of Jukai out of pack 7. Akki Drillmaster continued the string of playables, and Patrick rounded out the final pack with Feral Lightning and Rending Vines before grumbling over to the build area.

Sullivan's deck ended up pretty good, with a solid curve, three Barrel Downs, Yamabushi's Flame, and First Volley as pure removal, plus a full curve of solid beaters and a semi-bomb in Patron of the Akki. Since there are four rounds of this draft Friday, I suspect it's a pretty easy 3-1, though the table is tough and Mike Hall has an insanely good white deck with multiple Charge Across the Araba and a fourth-pick Celestial Kirin that Pat opened.

Teammates Fabiano and Krempels were scrapping with each other for black cards the entire draft and their decks suffered a bit for it, while the rest of the decks look at least reasonable, though Patnik got a bit squeezed on colors, at least partly the result of Sullivan passing the Final Judgment and not switching into white.