Paul Cheon was sitting pretty for the first draft of Day Two. After losing his first round of Day One to Chris Lachmann, on what was described as a "miser's Pact of Negation", Paul rattled off six straight wins including a 4-0 in his last draft pod. As he looked around the table he had to feel pretty good about his positioning with the other notable players well out of his reach. Michael Jacob, a member of last year's National team, was two to his right while Brandon Scheel, with his back to back Top 16s on Pro Tours this season was half a table away.

Paul knows better than anyone not to underestimate anyone in this draft pod though. It was just a couple of years ago when Paul was the unknown guy at a low numbered draft table at the beginning of Day Two – and he went on to be went on to become the Champion and is now a Level 8 member of the illustrious Pro Player's Club.

Paul opened his first pack and was greeted by Furystoke Giant. If you look closely at the art on Furystoke Giant you can see a blue envelope, several trophies, and an oversized novelty check. Trust me; they are all in there. With his first pick out of the way Paul tucked the Giant in the back of the pack and spent the rest of the allotted review period figuring out what might come back. He counted through the cards and seemed to resign himself to getting a ninth pick Slinking Giant.

While monored has been all the rage this weekend, Paul has been a big advocate for white and was sorely tempted in pack two by a Wilt-Leaf Cavaliers but took Tattermunge Duo instead. He slumped just a tiny bit when his next pack contained another Cavaliers and could have taken that or Trip Noose but was invested in red and third picked Giantbaiting rather than send any errant red signals to his left.

Every time I have watched either Paul or Luis Scott-Vargas draft this weekend one of them has seemed to have Resplendent Mentor in play. Like many of the cards in the mono-red deck – Mudbrawler Cohort, Giantbaiting, and Intimidator Initiate – the white Mentor rarely saw play in the early days of Shadowmoor draft but its stock has been shooting through the roof with the recent Kithkin recruitment drive of Eventide. Paul took a speculative Mentor with his fourth pick, no doubt thinking about the synergy between it and Cenn's Enlistment – and making an endless supply of tokens is also pretty good with Furystoke Giant. 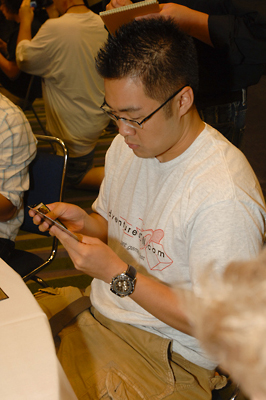 The rest of the pack seemed very promising as a pair of Mudbrawler Cohorts came sixth and eighth sandwiched around Sootwalkers and Manamorphose. Sure enough his ninth pick was the prophesied Slinking Giant. Red was clearly wide open from his right and with nary a red card shipped downstream Paul could expect abundant goodies in the last pack of Shadowmoor.

If Paul had not opened his pack I am sure he would have thought he was getting cut off in red. His only choices were Sootwalkers, Morselhoarder, and an Elsewhere Flask. He was shaking his head as he flipped back and forth between his buffet of underwhelming picks before settling on the Hill Giant. His next pack was even worse for him with zero red cards to choose from and blue cards all over the place. He took Consign to Dream and let out a deep sigh. The sigh turned into a low groan as the next pack's cupboard was nearly as bare and he took Din of the Fireherd over Scar.

Paul did not seem to put much stock in Scars and let another one go by as he half-heartedly selected Runes of the Deus. He began to toy with being blue with his next pick – no doubt thinking of the hybrid cards in the next pack – and took Briarberry Cohort but he had already shipped plenty of blue in that direction and could not expect much blue to come back to him when the tides turned.

Paul had to be pretty sure that he did not put anyone into red but other than a late Horde of Boggarts he saw very little red and none of the cards that make the aggressive red deck such a feared archetype in this draft format. One of the most impressive qualities that I have observed in Cheon over the past couple of seasons is his even-handedness in the face of adversity. He was visibly rattled by how the pack had gone for him as evidenced by the way he sharply picked up and passed the packs with each progressive non-red pick.

He opened the third pack with a choice between Flame Jab and Crag Puca, choosing the creature to make up for the dearth of bodies in that second pack. He considered picking up Thunderblust with his second pick but opted for the Puncture Blast instead. Riverfall Mimic was next and was followed up with a pair of Cinder Pyromancers – a card many people still underrate in the mono-red archetype. A third Pyromancer made its way all around the table as did Unwilling Recruit and Hotheaded Giant.

Although the Thunderblust did not come back almost everything else did. Because of the triple red in the casting cost – and Paul's notion that there was not another red drafter; just a bad run of cards in pack two – he did not think anyone but a dedicated red drafter would take it. 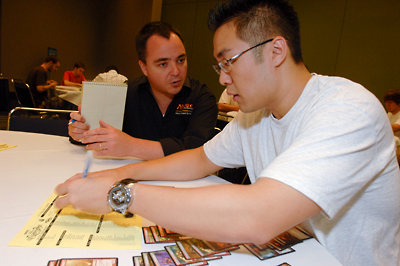 BDM teaches Paul Cheon how to play Magic."I thought the Thunderblust was going to table but I guess someone else is either mono-red or has a really crappy deck," said Paul as he tried to assemble enough cards for a deck. He shook his head as he thought about the white deck he could have had passing multiple Cavaliers and Cenn's Enlistment to his left. "Someone has an insane green-white deck."

"Man! Why are you not 23 cards?" sighed Paul as he laid out the cards he knew he was going to play. "There were so many cards I would like to have seen in the third pack. There were no Streamhoppers and none of the Mogg Fanatic guys."

He began to pour over his cards looking for the last three or four additions. He decided Consign to Dream was good enough to just play with a handful of Islands as his only pure blue card but after that he started to get a little desperate. He added Traitor's Roar and a Din of the Fireherd that went waaaaaaaaay over the right of the rest of the cards that were laid out in curve order.

"Every deck needs a miser's card," laughed Paul looking at the eight-mana spell that would destroy a handful of lands but maybe one creature if he actually cast it. "It would be like flashing back Chainer's Edict."

He quickly cut both cards and added an assortment of Scuzzback Scrappers and Rustrazor Butchers: "Wither guys are good with Furystoke."

He finally zeroed in on his final build and assessed the results with a predicted 2-1 record. "It started off so promisingly but I would be happy with a 2-1 record. I have a bomb in here right? I do have a bomb."

1 Din of the Fireherd
44 Cards