hen you're the No. 2 Ranked Player in the world and the wider-than-you-think-margin of 8 or so Pro Points behind the No. 1 Ranked player, Jeremy Dezani, how do you overtake the leader to claim the top spot? It's a question Reid Duke is trying to answer, and had begun with an undefeated draft that turned into a 7-1 Day One record at Pro Tour Journey into Nyx.

While the draft viewer covers each of his Day One Draft picks, there's more to the story than simply seeing the end results. How does one of the preeminent players in the world handle Theros block Draft?

"I felt like I had a bit of a leg up since I played so much of the previous two sets," Duke said. "My number one priority was to learn the new cards, and if they changed anything about drafting the next two sets. Number two was to shake the rust off and make sure I was completely sharp and in fighting shape."

"In terms of my strategy," Duke continued, "I usually try to avoid red unless all things being equal I open something really good. I try to go any combination of white, blue, green, or black, with white-blue and black-anything being my favorite combos."

Are there archetypes to Theros block Draft? If so, do they define the format?

"Not really," Duke said. "I think that the most important thing is a well-balanced deck with a nice curve and some removal spells. You don't want any holes in your deck. Once you accomplish that it definitely benefits to have key synergies that benefit you as the games go on to get an advantage in the late game." 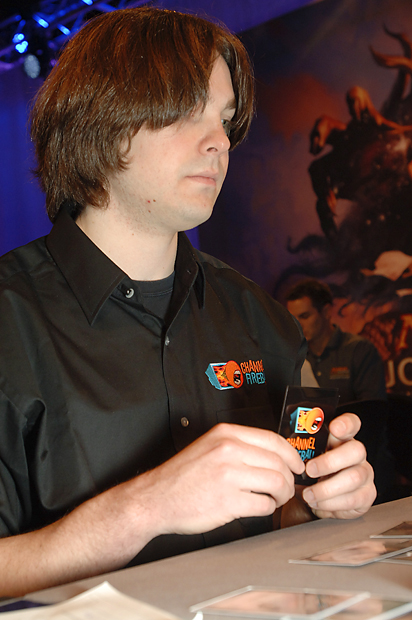 No. 2 Ranked Player Reid Duke's assessment on the draft format? Build a well-balanced deck with a nice curve and removal. Don't leave holes in your curve.

So how did Duke think his draft went today?

"I would say it went according to plan," Duke said. "I didn't really get any bomb rares – always in these high-pressure situations it's what you're thinking about: 'Please, please can I get something?' But I was able to find colors reasonably open with a good curve and removal spells. Once I achieved that there wasn't much to complain about. I'd say my deck is a 6/10."

Was it just a coincidence then that you ended up with black-green decks for both of the drafts?

So why would other players shy away from black-green in draft?

"It tends to be slow," Duke said. "People tend to think of this as a very fast, tempo-oriented format and lean towards flying creatures and evasion. I'm comfortable with the control approach and taking it slower. I really liked that I was drafting with Patrick Chapin. He really likes red. I really don't. He really hates blue. I really like blue. It seemed like something that would work out well for me."

So why were Duke and Patrick Chapin split on red in draft?

"Well, I found one of the keys to the format is you don't want to draft a deck that loses to a big blocker on the ground – Nessian Asp, a bestow creature, etc. Red with burn and without much evasion can't get by. You don't have card advantage. You're basically all-in on your early rush with the cards in your hand, hoping for the best. I'm not comfortable with that."

Is there anything else interesting about Theros block Draft?

"One more interesting thing is speculating on cards in the first pack," Duke explained. "You saw me take Kruphix's Insight and Satyr Wayfinder early in the draft. Those cards can become very valuable come pack three, and it turned out I opened Nemesis of Mortals. Other examples are Market Festival and Knowledge and Power: You typically wouldn't put them into a deck but if everything comes together they can be really powerful."

Check out the deck that Duke piloted in the second draft below.