During the Standard competition, over a third of the field opted to play the Jund deck. As we work our way through Saturday, the most-played Extended archetype is overwhelmingly Zoo, but by a smaller percentage: 29%. This comes as no surprise; Zoo was already very popular at Pro Tour–Austin, and after it took both spots in the Finals and the championship prize, players were both packing it and gunning for it here in Rome.

In second and third were Hypergenesis (36 players) and Dredge (32 players), the most "broken" decks in the format. Players flocked to the two seeking to simply use the most powerful strategy headed in to a somewhat unknown field; after all, if opponents don’t treat the two strategies with respect in their maindecks and sideboards, they’ll walk all over the field of competition!

Dark Depths, which debuted in Austin, cooled a bit at Worlds with only 25 players opting to give it a go. Rounding out the Top 5 was a hit from last season that had fallen out of favor this year: All-In Red. With Zoo being one of the more powerful choices in the format, and a host of other decks also negatively affected by Blood Moon effects and Chalice of the Void, the archetype could play spoiler to the weekend sending a lot of players packing before they had planned.

And for those wondering, "Highlander Control" is no typo. Hall of Famer Frank Karsten is playing a control deck with all one-ofs except for the basic lands! 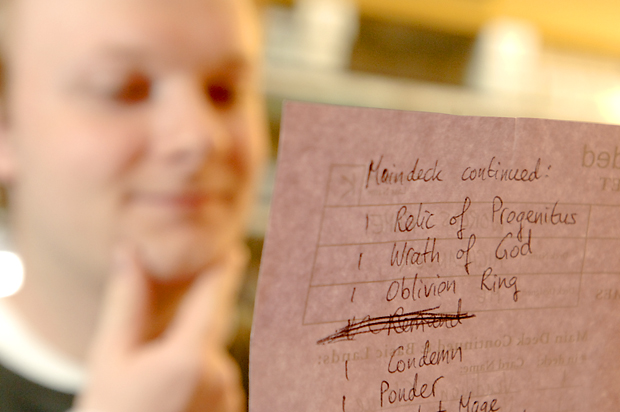