Feature: First Sightings of the Future 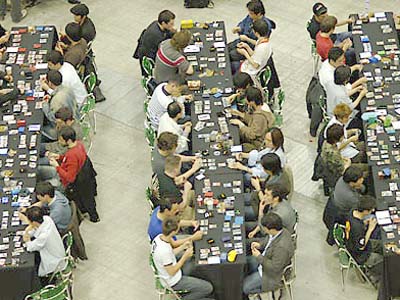 hile the Pro Tour is the main focus of attention right now for most here in Yokohama, there is a strong contingent of players here for the Future Sight Prerelease events also running here this weekend. With the Pro Tour already having cut for Day 2 as I write this, this includes a hefty amount of Pros, who, as gamers, are just as excited about the brand new set as the rest of us.

I went down to the floor to get some first impressions both from players in one of the flights and from those who were peeping on the sidelines looking for a first look at what Block might become.
Paulo Vitor Damo da Rosa seemed pretty happy with his (at time of writing) 2-0 deck. "Maelstrom Djinn is pretty much always a quick 10 damage in the air, and I have 2 copies of Foresee to find it, or maybe my Disintegrate." The blue card drawer was just one of the cards with scry that Paulo was all in favour of. "Scry is really good mechanic for Limited, it just sort of smoothes your draw and makes the game more fun."

Eli Kaplan was a jolly fellow during deck construction in another flight as he showed off the nifty new combination of Amrou Scout and Bound In Silence, the Pacifism-esque Tribal Enchantment-Rebel Aura that can be fetched just like any other Rebel. He was also pretty pleased to have two of the five "free" spells, in the form of Pact of the Titan and Intervention Pact.

Luis Scott-Vargas had something to say about these spells as a group. "With storm in the format too, the free spells seem pretty exciting. At the moment there is a lot of talk about Pact of Negation, but I think that they're all really good. The green one (Summoner's Pact) looks interesting to me."

Meanwhile, stories drift back to the coverage room, and there are little explosions of excitement among us coverage staff as we hear about the various new cards. BDM's favourite play (so far) with the new set involves turn 1 Sulfurous Springs and a Lightning Axe to allow for a discard of Golgari Grave-Troll. All that dredging then means that there is the potential to play Tombstalker for two mana on turn two thanks to its delve keyword.

There are plenty of keywords in the new set, and it's really cool to see people's reactions to how they all work together. Then we have the reactions to the new card frame. This one really doesn't need much in the way of explanation.