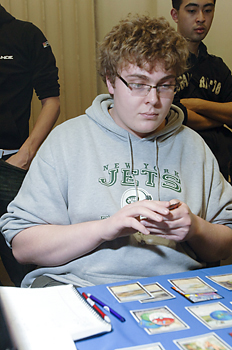 Matteo Orsini-JonesIt takes dedication to make it to a winning Limited record at a Pro Tour fed by Limited PTQs, but it takes something more than that to make it through the draft portion undefeated. It takes mastery which few possess. Of those few, these four players arrived to that level in sometimes surprisingly different ways, each approaching the draft with different emphases—on mana fixing, aggressive creatures, removal, and five-color power.

Matteo Orsini-Jones brought his mighty mastery to bear against Shards / Shards / Conflux Draft with a penchant for five-color decks, fueled by the copious mana fixing in the newest addition to the block. Although Orsini-Jones preferred to remain flexible when possible, his technique in this format relied heavily on control elements when he could get them. Wretched Banquet, an often-overlooked card from Conflux, fits perfectly into an Obelisk-based five-color deck like the one he drafted in the first pod yesterday. One of the interesting effects of Conflux on this draft environment, Orsini-Jones said, is that the basic landcyclers and colorless fixers allow a tri-colored deck to splash the other two colors to take advantage of powerful five-color cards. “Draft mana fixing!” advised Orsini-Jones, although he made it clear he was perfectly comfortable shifting strategies when necessary, grabbing himself a lightning-fast black-red aggressive deck in the second pod.

On the opposite end of the spectrum is Rheinhold Kohl, whose Bant and Naya aggro decks demonstrated his plan of drafting aggressive creatures to punish stumbles in his opponents’ game. Unlike many players who attempt to avoid the early, heavy color commitment of powerful cards like Wooly Thoctar, Kohl recommended such cards highly.

“I’ll even take cards like that, including Wild Nacatl, over a lot of removal,” claimed Kohl. “Wooly Thoctar I would take over Oblivion Ring.” Color fixing is still important, he commented, but the landcyclers from Conflux reduce the pressure to draft such fixing early on. Perhaps most impressively, Kohl had only played this Limited format in his GP–Rotterdam run previous to Kyoto. 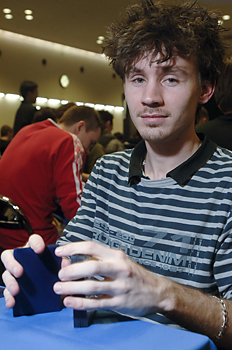 Yann MassicardFor any two such disparate strategies, there will always be a third master treading the middle ground, and that man is Yann Massicard. Massicard commented that he disliked committing fully to a shard, preferring to keep his picks within a couple of colors early on to be able to react and reap the rewards over the course of the draft. His preparation on his own for Conflux was minimal but he planned accordingly and stayed and drafted with fellow pro players Guillame Wafo-Tapa and Shuuhei Nakamura here in Kyoto prior to the event.

“Yeah, don’t commit to a shard,” Massicard said, but then backpedaled: “unless you get something like Sanctum Gargoyle!”

Finally, the master of masters—undefeatable Luis Scott-Vargas—incorporated many of these strategies into his own successful run at Limited here in Kyoto. With a slight Esper bias, LSV found himself looking past the initial focus on good removal to emphasize prioritizing color fixing. “Tri-lands, panoramas, Obelisks, and Armillary Sphere,” he listed. “You need about five pieces of fixing from among those, with the tri-lands obviously being the best.”

Scott-Vargas also imparted the necessity of re-evaluating previous cards within the context of the new set. “Call to Heel has gone up so much in value,” he remarked, noting that both Parasitic Strix and Sedraxis Alchemist combo amazingly well with the blue Shards of Alara common. With his bias toward Esper, he was also quick to note that powerful creatures like Tower Gargoyle are so good that he will often draft them over good removal.

A variety of draft archetypes have gained a considerable boost from Conflux, and no matter where you prioritize various deck components, strategies as disparate as black-red aggro, five-color Obelisk control, and blue-black tempo with or without an artifact focus can all thrive.