Amidst the bright lights of returning stars to the Pro Tour, including a heavy helping of classic Hall of Famers like Jon Finkel, Olle Rade, and the newly elected Steve O'Mahoney-Schwartz, there are a host of newer faces here in Philadelphia too. Magic Weekend is their event as much as the veterans', and I caught up with a few of them to discuss their performances this weekend and what it's been like transitioning to the Pro Tour.

First on the docket was Finland's Max Sjöblom. The sole undefeated player left in the tournament when we spoke, Max is new to the Pro Tour scene, though not entirely a rookie.

"I've played two Pro Tours before, and one World Championships," Max described as I asked him about his professional experience. In typical Finnish fashion, he downplayed his accomplishments to date, revealing a reserved personality that was focused more on the task at hand than on reminiscing of past successes. That's a tall order considering that his first trip to the Pro Tour was a World Championships he qualified for by becoming his nation's national champion! 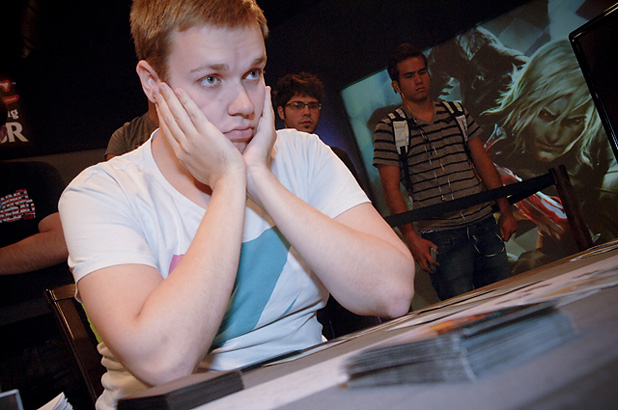 Max Sjöblom has had a good weekend so far.

For newer players on the Pro Tour who lack the long professional experience of their more established pros, preparing for the event can be the critical difference between success and failure. How much time had Max and his teammates put in preparing for Philly?

"I've been drafting a lot on Magic Online," he explained, adding, "I was preparing for Nationals, which was the same Limited format." Max earned his invite to the Pro Tour by winning a Magic Online qualifier.

How does Max find the time to test? "During the summer I can play a lot," he replied, pointing out that as an engineering/sciences student in Helsinki, he's presently on vacation with lots of time to work on his game.

That left just one final question: how did he feel about his performance on the weekend? His demeanor cracking ever so slightly, he let slip a grin and said, "I feel good!"

There were a few players from the Czech Republic hovering around the top tables, and I knew just who to talk to for the scoop on who they were and how they came to the Pro Tour: Martin Juza. The Czech star was himself the subject of an article just such as this before bursting into the Pro Tour limelight as a perennial contender for Player of the Year. His fellow countryman he was rooting for most? Vit Vavra, a friend he once played on the National team with. 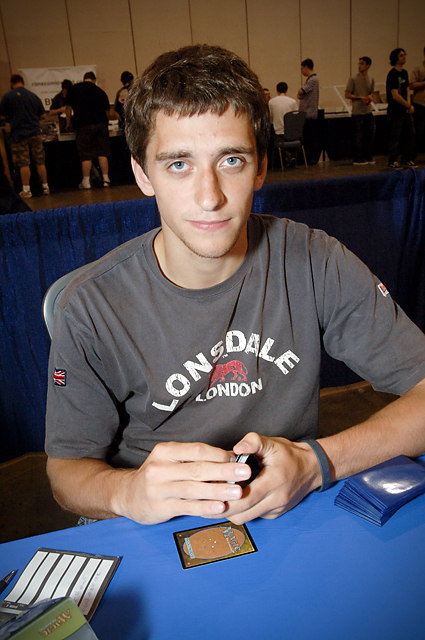 "Vit is a good player," Martin quickly answered when I asked him about Vavra's prowess in the game. "He definitely knows how to play." I asked him why, if that were true, Vit had only been to a handful of Pro Tours in his entire career? "He goes to school," Juza explained. "He knows he's good, and he knows he's good enough to make Day Two when he wants to. For him now, Magic is something he can do for fun. He'll go to a Grand Prix if he knows his friends are going and they'll have a good time."

The notion of a successful player like Vit, able to visit the Pro Tour on his own terms, is certainly an ideal to aspire towards. I talked to one more such player, also in the early stages of a Pro Tour career but simultaneously in the twilight of it, and still going strong throughout the day in Philadelphia. That player? John Stolzmann, who is a professional poker player when he's not wearing his Magic hat, was still in contention for the Top 8. A Midwesterner originally from the Madison area, which has produced the likes of Bob Maher, Adrian Sullivan, and Brian Kowal, John now lives in the Long Beach area in California. 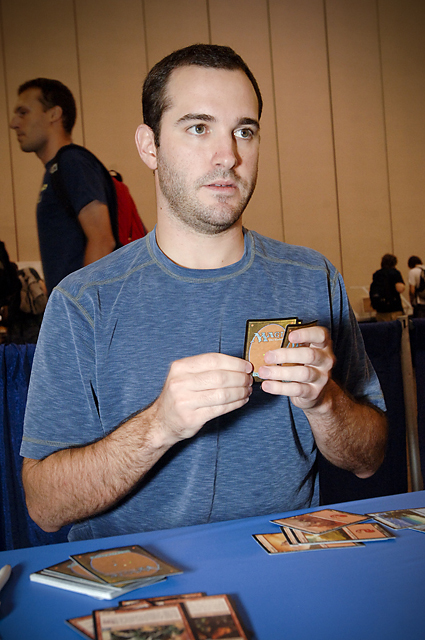 "I hadn't played Magic in about a year, actually," he explained when I asked him what brought him to the Pro Tour. "But my friend Jason Lemahieu was head-judging Grand Prix Kansas City, so I flew in to hang out. I Top 32ed that event, then I noticed my rating was really close to qualifying for the Pro Tour."

John estimated he needed just 1 to 3 more ratings points to qualify, a task as simple as winning a match or two at Friday Night Magic. The challenge? If he were to lose a match, he'd scrape approximately 8 points from his rating and have to win even more.

"I'm mostly a Limited player," John said, detailing his efforts to get the final few points to qualify for Philadelphia. "I wanted to draft at FNM somewhere, but I didn't know the caliber of players where I was."

The solution? John bought a plane ticket to his home town, Madison, Wisconsin, and went to Friday Night Magic in the shops he had grown up on against players whose skills he could gauge. The trick worked, and he got just enough points to qualify on rating.

Unfortunately for John, the Pro Tour this weekend features ten rounds of Constructed play. What was John going to do about that? "I've actually only played about thirteen Constructed tournaments in my life," he said, laughing at the oddity of doing well at an event that features so much 60-card-deck playing.

"I'm really having fun at this tournament, though," he added. "I came up with an awesome deck, and while a few other groups thought of the same idea independently, I'm having fun with the deck. For the first time, I feel our deck is tier 1."

John also credited Sam Black, Matt Sperling, and Patrick Chapin with helping him improve and fine tune the deck. Where did John see his future with the game? "If I don't qualify for future events at this Pro Tour, I won't be PTQing, but I'll still look forward to playing events as I can."

For John, Vit, and Max, Pro Tour Philadelphia marks an early stop on their Pro Tour careers, but it has already been a successful experience on their own terms. Here's to hoping the rest of us earn the ability to experience the same in the future!