Feature: The Game of the Year

did U.S. Nationals and JSS competitors know, but the center of the Cobb Galleria floor - that they had been walking over all weekend - was actually a Magic playmat of Brobdingnagian proportions. The realization of its purpose only deepened its mystery. What gamers had the stature to stride among its airy spaces, and claim victory with coffee-table-sized lands and spells? What titans would dare challenge this epic theater of the mind?

How about a celebrated member of the Hall of Fame and the creator of Magic itself?

Alan Comer and Dr. Richard Garfield met on the field of battle to cap Saturday's activities here at Magic Weekend in Atlanta. Comer had designed the decks that they would crash into one another, but Garfield was already 1-0 versus Hall of Famers, having defeated Darwin Kastle at last year's Game of the Year.

Fifty-pound stacks of ludicrously oversized Magic cards? Check. A Red Zone the size of a Seattle crosswalk? Check. Hundreds of foam fingers in red and blue? Check. Hundreds of actual fingers of onlooking Magic fans, who had been divided down the middle to cheer for either Comer or Garfield on the field of battle? Checkety-check.

Let the Game of the Year begin. 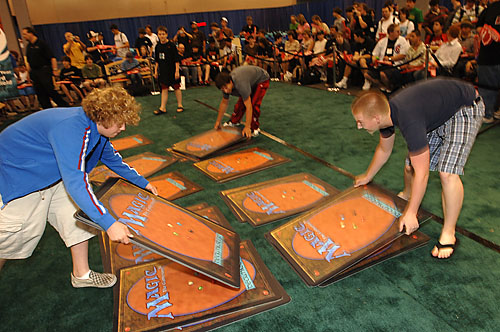 Shuffling was an awkward affair involving a three-man pile shuffle on each side.

Master of ceremonies Randy Buehler selected two gamers from the crowd to help out these legendary titans of the game, and found Kevin from Detroit to help Richard, and Nick, also from Michigan, to game alongside Sir Alan. Head judge Sheldon Menery flipped a (suitably oversized) coin, and the flip went to Dr. Garfield on the blue team -
to the cheers of half the hall. Each team assembled 20 volunteers, flags in hand, to serve as life counters, and the game was on. 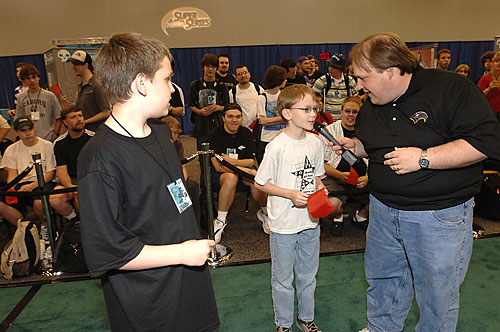 Both teams kept their opening hands, each gigantic card propped up by a Magic player. Blue team led off with Boreal Shelf and Adarkar Wastes - the blue life counters didn't like the painland! But Richard and Co. had a particularly spicy opening play, a four-foot White Shield Crusader, which had protection from black against red team's black-red-blue deck.

Alan's red team had Tresserhorn Sinks and a pair of Snow-Covered Mountains, but no turn-three play. The Cobb Galleria exploded with cheers as Richard's assistant Kevin pushed the enormous Crusader into the Red Zone! 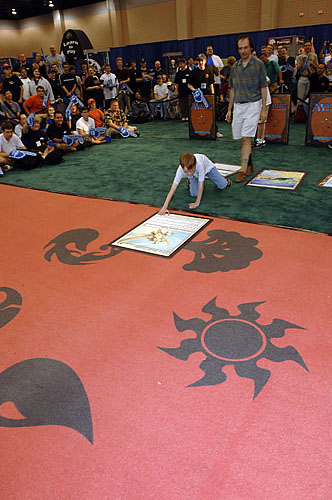 Red team considered its options, and showed their old-school style with a monstrous Goblin Mutant. Blue team slowtripped with Heal at the end of turn, and untapped into a very promising Glacial Plating on the White Shield Crusader. Unable to pump or Jump the Crusader, blue team had to stay at home and yield the turn.

Red team saw its opportunity, and got in for 5 with the big trampling Mutant. After combat they dropped a Lim-Dul's Paladin, another texty old-school creature unafraid of the Crusader. 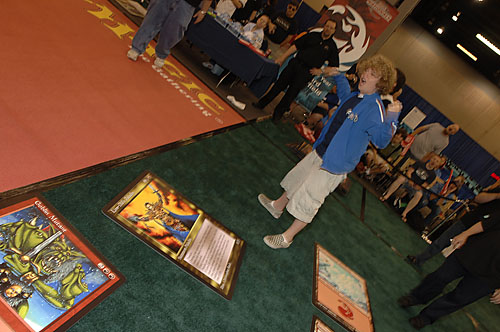 You may have made the rules, Garfield, but our captain made the decks!

Blue team paid for the Plating, representing the age counter with a Coke can, which cranked the Crusader up to a respectable 5/4. But facing up to nine points of damage and not wanting to chump the red beast with Crusader, Garfield's team made Balduvian Frostwaker, cantripping a Barbed Sextant into - of course - a Phelddagrif in hand.

It was red team's moment. Alan sent the Paladin, and the pro-black Crusader stood in the way. Two points of trample damage washed over the Crusader and into blue team's saddened life total. Two more frowning flag-holders had to leave Richard's life crew, and red team followed up with a crowd-pleasing Earthen Goo. 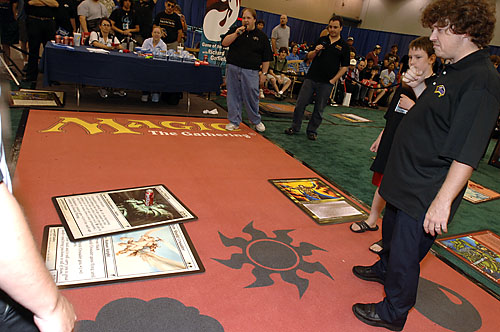 Alan Comer and pal Nick pump the fist, unafraid of the growing Crusader.

Richard's minions paid Glacial Plating's upkeep and drew a Swords to Plowshares off the top, to the cheers of the blue team. Without bothering to give flying to their White Shield Crusader, they bashed into the Red Zone for 8. Red had to take the damage to get anything going, going to 10 and facing the possibility of an 11/10 flying pro-black monster.

Secretly, the red team held a Deflection, ready to fire any potential -
oh, I don't know, Swords to Plowshares - right at that monstrous Crusader. When Richard's team passed, Alan and crew let the Paladin go to the graveyard and paid for the Goo. They crashed in for 8 points of their own. Richard put the Frostwaker in front of the Goo and activated it to animate a Snow-Covered Forest, but the plan was all on that Plated Crusader. 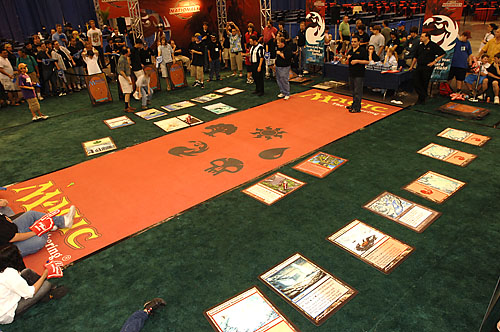 The air was still over the field of battle. Would a Plated-up Crusader win the game single-handedly, or would red team's untapped blue mana come to the rescue?

Richard's team mindfully paid for the Glacial Plating one last time and simply turned the 11/10 monster sideways. With no Swords-related mistakes, red team had no options, and Judge Sheldon Menery declared the damage lethal. The battle was over!

To the victor go the spoils, and Richard's friend Kevin got to select one of the oversized cards to take home. A fan of the classics, Kevin reached for a Force of Will. Richard Garfield offs yet another Hall of Famer, and chalks up his second win in the 2006 Game of the Year! 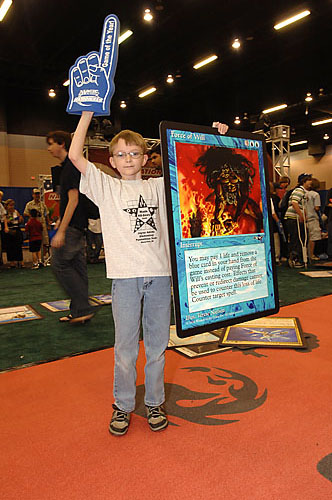