Feature: Getting to Know Your Role 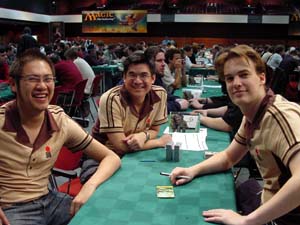 New Zealand team? That must be a mistake. New Zealand's on the other side of the globe. What would a player from New Zealand be doing here let alone three? Enquiring minds feel the need to know.

Then I remembered seeing a face at registration that had looked vaguely familiar but I couldn't quite place it. That face belonged to David Bullock and I remembered it because I'd played him back in 1999 when he was part of the New Zealand national team.

David has played in the New Zealand National team twice, but currently he's pretty much retired from Magic. He only really plays team limited mainly because it's fun.

Jonathan Luey made the National team back in 2000. Darryn Ying hasn't had that honour, having finished in the unlucky 5th place, although he has been the North Island Champ. He does have a Pro Tour appearance in his belt, competing in Newark back in 1999.

All three are currently working and living in London. David has been over for 2 years, working for Thomason Financial, Darryn has worked in Harrow for the last 15 months and Jonathan is working for a project on the London underground. He's been in the UK the longest at two and a half years.

One of the reasons here, apart from really enjoying the Team Limited format, is that their flights here cost a fantastic 99p.

With that kind of price the only thing that's really surprising is that, with the exception of Reinhard Blech, they are the only players to have made the trip from the UK. This is especially annoying for the New Zealanders as they played in a trial for two byes and were beaten out in the top 4. They expected to see both the teams that made the final and got two byes here but neither showed up.

All of them are wearing old New Zealand cricket shirts with their names on the back and are looking forward to the summer when they expect the Kiwi's will give the English a good kicking on the cricket pitch.