incent Lemoine is having a good year.

We are used to seeing Vincent around the European Grand Prix circuit, where the Belgian pro has been a regular for many years, but 2011 has been different. It all kicked off with a Semi Final appearance at Pro Tour Paris, and then Vincent claimed the Belgium National Championship in the summer, repeating his 2004 achievement. Those two results have put Vincent on the fringes of the Player of the Year race, and his growing reputation was being added to further in Philadelphia, where he fell just short of making Top 8.

Vincent was piloting a robust variant of the Twelvepost deck, and I sat down with him to talk about his deck and the reasons behind his great 2011.

"There is less pressure on me. By that I mean I'm putting less pressure on myself. I used to travel around with (Pro Tour London Champion) Geoffrey Siron, and Bernardo De Costa Cabral—they were the best Belgian players and they were always winning things, or making Top 8 at big events. They always told me that I was as good as they were, but I never seemed to win and I just put myself under massive pressure to live up to what they said about me, so I would feel like I deserved to be with them. I was very young and I thought Magic was everything, and I just made it impossible for myself. 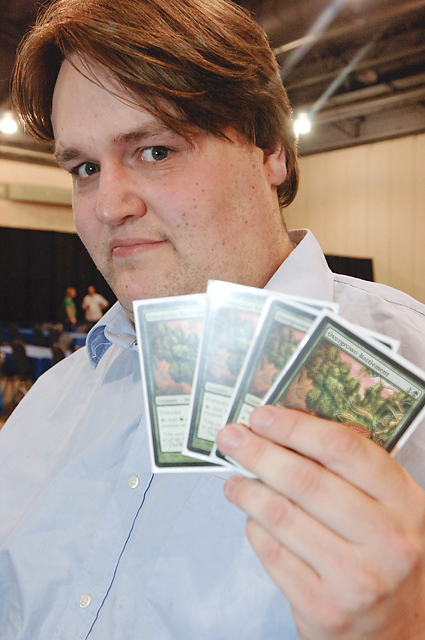 Vincent Lemoine and his Overgrown Battlements

"I stopped played competitively for a few years, and when I came back I was older and I had more experience—more life experience especially—and I knew how Magic fit into my life a lot better. Obviously Magic is really important to me, but losing at Magic is not like having a friend die, or anything like that, so now I can lose and just tell myself it doesn't matter—it's just a game.

"And having somebody like Marijn Lybaert in the Belgian play group is really good, because he's a great role model. Marijn makes Top 8 a lot, but when he loses he accepts his mistakes and doesn't blame the game—I tried to learn from that. It used to be that I would lose, and I would get really angry. I only ever lost because my opponent got crazy lucky, or I drew bad cards, but that didn't help me at all. It meant that I would go into my next match angry and would lose that one as well. It used to be that I would lose a match then immediately lose the next one, and that doesn't happen anymore."

Who did you work with for this Pro Tour?

"With the other Belgians who are here: Marijn Lybaert, Peter Vieren, Christophe Gregoire and Bernardo De Costa Cabral. We all tested together, and then Frank Karsten was feeding ideas in as well. As soon as Frank heard about the format change for this Pro Tour he wanted to come back and play. I think it's been a really great change. We have a good team; Marijn always wants to work hard and playtest a lot so I'm glad he's on the train, and he wants me to be on the train because I'm the same and want to playtest a lot. Being in a team with your friends is one of the best things about coming to big events like this—there's always one of you doing well, either making Top 8 or being in contention, so even if you are having a really bad run you can be happy for them!"

Tell us about your deck. It's a very solid version of Twelvepost, right?

And Overgrown Battlement makes you less vulnerable to Blood Moon, which is beating other Twelvepost players...

"Ha! Every time an opponent has had Blood Moon in play I've won—those games are easy! The Wall is just too good, it's really the reason why I like the deck. If I play against somebody with Blood Moon, then I can just find my Overgrown Battlements instead of relying on Cloudposts. I get three Battlements, six lands (that are all Mountains), and I can cast Emrakul, the Aeons Torn. And Overgrown Battlement is really good against Zoo as well—it's a Wall! Before I was playing Battlement, I had Kitchen Finks for the aggro matchup. But because Finks costs double green, I often couldn't play it because of my Cloudposts. Overgrown Battlement is just so much better."

"I have Sarkhan Vol in the sideboard for the mirror match, and he's awesome. You play him very quickly, and then you can give your Primeval Titan haste and get your lands faster, or if your opponent has his Primeval Titan then you can steal it and attack him back so you don't fall behind. I know a few players have Scapeshift and Amulet of Vigor for the mirror match—and that is very good as well, but Sarkhan Vol has been great for me. I think the Twelvepost decks that didn't play either Scapeshift or Sarkhan Vol probably lost really quickly."

And finally...You were in the Top 8 in Paris, you're the Belgium National Champion, you're going to play in both the Team and Individual portions of the World Championships in San Francisco, you may make the Top 8 here in Philadelphia... are you going to be Player of the Year?

"NO!!! Never. My aim for the year is just to make it to Level 7 in the Pro Players Club, and maybe if I get there soon I can try to make Level 8. I used to want to win everything, to always make Top 8 of everything, but these days I set lower targets for myself. It's better to aim for something achievable, and then anything above that is a nice extra. If you always aim for the best then you just set yourself up to be disappointed."

4 Through the Breach 2 Beast Within

4 Through the Breach 1 Punishing Fire

4 Through the Breach 1 Primal Command