players come to Nationals with the intention of "grinding in," though few walk away from the up-all-night, scratch-and-claw events with the coveted invite. Those who do consider themselves fortunate enough to exit the bloodbath that is "lose and go home," or at least "draft all weekend long," but when they do make the cut, they're often faced with round after round of tough, Pro-Tour-hardened veterans who seek to end the dreams of those with ideas above their stations.

A product of Orlando, Florida, David Sharfman got all the drama out of the way when he won the first grinder with Hand in Hand, taking out Zoo in the finals. His slot secured, he sought to make a name for himself in what can certainly be considered a tough room.

While he's had a little success on the Pro Tour, with a day two in Atlanta and a hundred bucks in his pocket from Philadelphia, he's here to take ass and kick some names. He ended Day One in a very attractive 10th place, dispatching both Tim Aten and Nick Eisel in the process.

He drafted a tight little control package, with four - count 'em, four - Rimewind Taskmages, 10 flyers and a pair of Frozen Solid for good measure. While he had confidence in his deck and stated that he liked it a lot, when Day Two and Round 8 rolls around and a nearly mono-white Wall of Stall is up in your grill, sometimes the bad guys win. Sometimes they even win two rounds in a row, and dash your hopes of grinding it all the way to the Louvre. 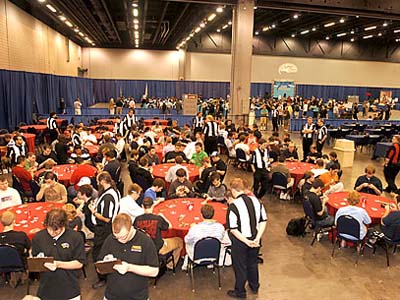 The tough job of grinding in is following by an even tougher reward: the right to run with the big dogs.

Nevertheless, Sharfman the upstart is here for the duration, or at least a few more rounds, and when you win your way in, they say that everything else is gravy. David might agree, but sure won't complain if he got a nice, big plate of mashed potatoes. Oh, and a succulent turkey. Stuffing too, pls/thx.

Nathan Zamora, however, believes that "better late than never," is the cat's ass; he won the final grinder with the French Nationals deck, defeating Wildfire Tron in the finals. While he didn't leave a star-studded roster of corpses in his wake, he finds himself in 34th place heading into Day Two.

When I approached his table, I saw a coin in his hand and a thumb more than ready to start flipping that bad boy into the stratosphere. Karplusan Minotaur gave both Nathan and his opponent a workout, though unfortunately, it couldn't lead him to victory.

He drafted a red-black deck that he's "mildly confident" with, especially if Rimescale Dragon hits the board, but he dropped some chagrin up on the five Feast of Flesh he nabbed. Apparently, they're not getting the job done, and might be ready for the "overrated" bin.

Nathan intends to side them out for lands and mediocre cards. Time, and lots of playtesting and/or Drafting with Rich will tell if his strategy holds water, and though three straight losses (one at the hands of the mighty Rimescale Dragon mirror match) might dampen the spirits of a lesser man, there remains one certainty in life:

Alas, it appears unlikely to be an intercontinental grind move this year. While there were two guys who gave it a hella ride, swung for the fences and dared to clutch the proverbial brass gold ring right out Gollum's disfigured little fingers, the uphill climb proved to be insurmountable. But, in the vein of the 1950s-era Brooklyn Dodgers, it's wait 'til next year, when new faces will take up the task of living the impossible dream.