Feature: His Genius Knows No Bounds

hat do you do when you attend a Pro Tour in your backyard, but you aren't qualified? You and your friends take on an unstoppable force of evil: the archenemy! In this case, the champions of good were local players Ricardo Berios, Adrian Marquez, and the mysterious man they call "Monkey." Their archenemy was Pro Tour Hall of Fame member and former Wizards R&D head Randy Buehler. The setting: the Champion Challenge, where many current and former members of R&D are having a great time battling all comers and talking about Magic.

"He gets to play AND draw first?" Monkey asked as they began.

Randy drew for the turn, and then drew a scheme, one of the powerful once-a-turn effects the Archenemy has at his disposal, which conveniently let him Rampant Growth twice on the first turn. Monkey was quick to try to get in on some of the benefits of evil. "So I get my Scheme now?" he said, grinning. Randy laughed but refused to hand over the powerful stack of cards. Turns out only archenemies get schemes.

An unusual choice of token.

Randy then schemed up Ignite the Cloneforge!, and a copy of Leaf Gilder joined Team Buehler. Soon, the players were on the back foot to Randy's numerous artifacts, and they also stalled on lands, but Monkey's Dragon-themed deck served up Chandra's Outrage, a new card from Magic 2011 that's previewed in Archenemy. After 4 damage to a Sanctum Gargoyle and 2 to Randy's face, the players looked to stabilize. 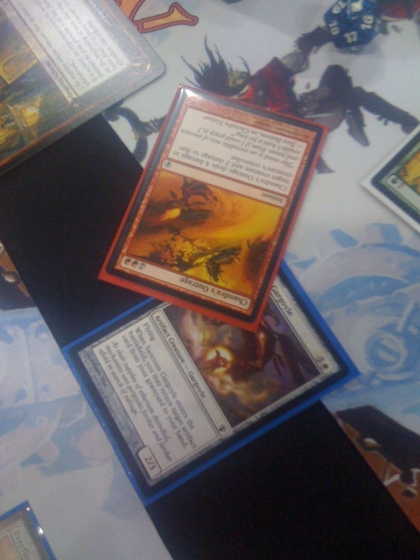 A little help from the future keeps Randy in check.

They were mistaken. Randy's forces grew and grew; an ongoing scheme (one that remains and continues to produce its effect) that replicated Seedborn Muse's ability gave him a huge amount of mana. The team from Puerto Rico, despite a large number of Dragon Whelps and 2-power dorks, were quickly subsumed by Randy's March of the Machines and assortment of four- and six-cost artifacts backed by Master Transmuter.

Other awesome quotes and moments from the epic battle:

"You can use these in any deck? Hmmm ...." Monkey said, the wheels of deck building turning for his own multiplayer mayhem.
"Actually, it's 1 less ...." sighed Ricardo, pointing out to Randy his ongoing Scheme Nothing Can Stop Me Now, which reduced the combat damage he took from each source by 1. Adrian immediately replied, "Don't help him!"
Randy announced that Introductions Are in Order for one of his favorite robots, the Sundering Titan. The scheme card let him either tutor for it, or put it onto the battlefield for free. (He chose to tutor for it.) Ten lands went to various graveyards that turn.
"So ... I die next turn, right?" asked Ricardo. Randy answered, "Yep, that's my plan." He paused when he got glares from spectators. "What? I'm monologuing!" Maniacal laughter followed. 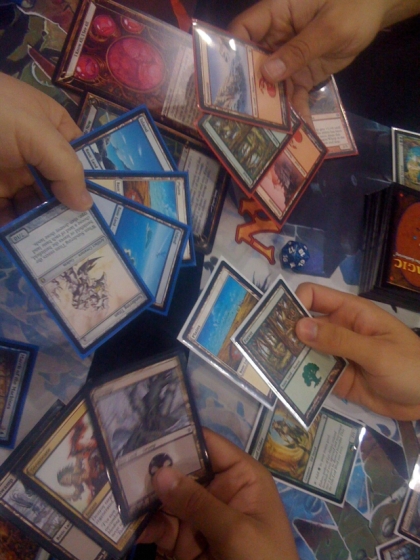 By the end, despite getting crushed by the power of the archenemy, Ricardo, Adrian and Monkey agreed they had tons of fun. They had a good time ooohing and ahhhhing over the preview cards, but even more fun teaming together to try to defeat Buehler. "I want to be the archenemy now," Monkey exclaimed at the end. Soon ... soon. Mwahahaha!

For more pics of Archenemy in action, head to the Magic Facebook page.