Feature: Hoaen Back in Black 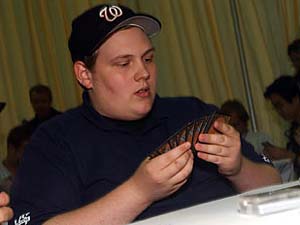 Rich looked to continue his winning ways after starting 3-0.

Friday's second draft, Richard Hoaen found himself at table number two, having won his previous table. His competition to do the same included a few names that might make that task a little trickier.

To his direct right sat Tsuyoshi Fujita, the man who first showed how formidable Japanese magic players could be by leading a charge that so many have followed. Feeding Fujita sat Eugene Harvey, former U.S. National Champion and the man whose play skill warps testing with such regularity that it has been named the "Eugene Harvey Effect." Tough crowd. The good thing about having such good players feeding him though is that it means that signals should be all the clearer, and the chances of getting in a nasty fight for colours is diminished.

Hoaen himself is far from being a slouch at draft. He is the most consistently high-finishing player in Limited on the Pro Tour, and may well have done more drafts on Magic Online in preparation for this event than anyone else in the room. Fellow high-volume drafter Sam Gomersall, with whom Hoaen has played in the Team Pro Tour and who is providing him with a place to stay while in London, has officially proclaimed him to be British for the weekend in order to keep the overall British average in draft up. Of course, as both of Hoaen's parents are British, he does technically count as a citizen anyway. For all the Union flag-wavers this is good news, as Hoaen is on many pundits' lists to make a Top 8 this weekend.

The signals certainly started out strong, with a first-pick Swallowing Plague being quickly and easily followed up by a Rend Flesh and a Befoul. Cruel Deceiver followed for Hoaen, and then a pair of Kami of the Waning Moon. It wasn't until pick number seven that there wasn't a quality black card just asking to be picked. The two real viable options were Devoted Retainer and Callous Deceiver, forcing Hoaen to make a choice. Blue or white both seemed like reasonable enough additions, but Hoaen went with the spirit.

Given that he was pretty effectively cutting off black, there was a good chance of getting some ninja action going with his Betrayers of Kamigawa pack, and with blue in the mix he would have access to both evasion creatures and the quality blue ninjas they could enable. A Kami of the Twisted Reflection and another blue Deceiver came in short order before Richard saw any more black. His next pick was a doozy for a deck as strong in the darkest of colours, though. While Midnight Covenant is basically unplayable if you are playing two or more colours split evenly, it can get very naughty when taking its place in a deck erring as Hoaen's was toward heavy black. A second Kami of the Twisted reflection looked to round out the playable picks from pack one. That is, until a second Midnight Covenant came up as a 14th pick. It seemed that Hoaen had successfully cut people downstream of him out of black as anything higher than a splash, and reaped his first reward.

In Champions-Betrayers-Saviors draft, cutting off colours can be a powerful tactic, particularly in black, whose cards in Betrayers of Kamigawa tend to be colour-intensive enough to keep people from having second thoughts about switching into if they had a hard time in the first pack. In white by comparison, all it takes is a Waxmane Baku or two to turn a scuffle over colours into an all-out war, which won't help either player.

Okiba-Gang Shinobi was the first pick for Richard in pack two. The black ninja has gone up in value significantly since the introduction of Champions of Kamigawa, keeping hand sizes -- and the scary effects that come with them -- to a minimum. A second-pick Horobi's Whisper (with the option of a second Okiba-Gang Shinobi) suggested that the player to the left of Richard was definitely feeling the signals from pack one strongly, effectively doubling the number of first picks that Hoaen got in his second pack.

A Hired Muscle and Ogre Marauder came to help round out the three-cost slot neatly, and a Takenuma Bleeder taken over Shimmering Glasskite signalled from Hoaen that he was more than happy to remain in black where he had the option to. A Ninja of the Deep Hours was the only real choice for him as a sixth pick, but realistically it was looking less likely that blue would be much more than a splash. Skullmane Baku and Skullsnatcher put him back in black, and the remainder of the picks rounded themselves out neatly without much incident. A second Skullmane Baku came to town and there was a Kami of the Tattered Shoji taken by Hoaen when he had little else in the way of options. The big fat behind of the white spirit would be enough to make his aggressive plan a little trickier so it seemed a perfectly reasonable bit of hate drafting.

Whatever pretence there was of Hoaen ever playing a deck that wasn't monoblack at the end of the draft was quickly nipped in the bud by the end of the third pick of Champions of Kamigawa. Akuta, Born of Ash was the pick to begin with, who would certainly be happy to maximise the number of swamps he had to gobble. Kuro's Taken followed and was swiftly outshone by Exile into Darkness.

When a Kagemaro's Clutch came fourth it started to look like Hoaen might end up in a position where he could just kill everything all the time. A Skull Collector and a second Kuro's Taken gave him some more solid beaters, before a sixth-pick Clutch came his way. At this point Hoaen's deck was basically built, but the people around him seemed to think he deserved something more. A Raving Oni-Slave made its way into the pile already pretty much full of black playables.

Building was pretty straightforward for Hoaen with his mono-colour monstrosity. After cutting a Skullmane Baku, all the non-black cards, and a few unplayables, he was all set. The prediction from the man himself? Two wins. The only card he felt a touch unhappy not to get to pick up was a Sink into Takenuma, which has the ability to press an edge such that a winning board position can be translated without much consequence into a tick in the win box.

All in all, Richard Hoaen isn't a man to grumble, and certainly not about the way his draft went. Interestingly, considering the talk of signalling, it was not lost on me that the player to his direct right, Tsuyoshi Fujita, was in blue-white, while Eugene Harvey appeared to be red-green. With good signalling and each player politely allowing space for the other, it seems very likely that these three pros are each strong contenders to sweep the table.