Feature: How to Cut Three Rounds

With only two days left in Pro Tour–Valencia and not a single match played yet, tournament officials had to figure out a way to cram a Pro Tour into two days.

"We wanted it to feel like a real Pro Tour," explained tournament manager Scott Larabee. To achieve that, a team of Larabee, head judge Jaap Brouwer, shadow head judge Riccardo Tessitori, and scorekeeper Federico Del Basso stuck their heads together to figure it out.

The main problem the team had to figure into their calculations was player travel on Sunday. According to Larabee, about 75 percent of the players buy their plane tickets so they are scheduled for a Sunday return to their home towns. Therefore, the tournament brain trust decided to run as many rounds on Saturday as possible. The team placed the cut-off for Day Two (which will have only three rounds of Swiss) at 21 points. 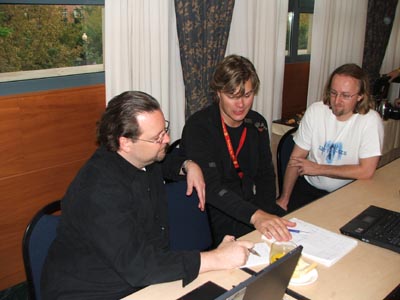 Left to right, Larabee, Brouwer, and Tessitori in the Flood Control Situation Room, trying to figure out a two-day Pro Tour.Our estimate is that out of 400 players, there'll be 60 people in the running. We ran this format basically in Yokohama," said Larabee. "To make Top 8 in Yokohama, you couldn't have more than four losses." As Valencia has three fewer rounds, the 21-point cut-off looked reasonable.

The team also entertained the possibility of cutting directly to the Top 64 players (a.k.a. the money finish) after 10 rounds. Another variant that Brian David-Marshall threw into the mix was a "skins" payout like at Pro Tour-Philadelphia 2005. But the short amount of time in which Scott and his team had to figure out a schedule did not allow for it.

"Our only model was Philadelphia, and we would have had to remodel everything—we just didn't have enough time," he said. Valencia has about a hundred more players and a higher price payout, and the number crunch was difficult enough already.

The team ended up with a schedule that weighed player inconvenience, the judges' workload, smooth tournament progression and the available time in an acceptable way.

"It took us about one and a half hours to find the right numbers," Scott related.

The result: 10 rounds on Saturday, three more on Sunday morning (all at 55 minutes each) and a full Top 8 with untimed best-of-five matches following directly. That would mean a long Saturday for judges and players alike, but Brouwer thinks that his staff is up to the task.

The team felt that shaving five minutes off every round would benefit the smooth running of the tournament more than it would encumber players with slow decks.