Feature: How Did They Fair?

have a tendency to focus on the most unusual, most crazy, or most broken decks that show up at each new Constructed Pro Tour. However many players - myself included - shy away from solitaire 60s that draw their whole decks, untap their lands repeatedly, or generate nigh-infinite sums of mana. We love the so-called fair decks. We cheer for regular decks with interactive elements. We love attacking for two.

So how is it that players who are running regular old two-power creatures can compete in a format against Gifts Ungiven, engines, or the almighty Dr. Teeth?

Apparently the answer is Stone Rain.

Tsuyoshi Fujita, widely considered the world's greatest deck designer, came to Los Angeles with a new Boros-powered version of Red Deck Wins. Fujita is a longtime Mountaineer; he took all kinds of names with Goblin Bidding, designed the finalist Red Deck Wins from last year's Extended Pro Tour, and even innovated Sneak Attack in the Extended Grand Prix season. It is no surprise that Fujita again showed up with basic mountains in his deck.

Red Deck Wins had a lot of chips stacked against it coming into Los Angeles. With Rath Cycle gone, red lost Mogg Fanatic, Jackal Pup, and Cursed Scroll. So what did Fujita do? He borrowed one-drops from white! Alongside four copies of Wooded Foothills, four copies of Bloodstained Mire (both staples of Red Deck Wins for some time), Fujita ran two Windswept Heaths. All these Onslaught dual lands allow Boros Deck Wins to set up its four Sacred Foundries consistently. Together with a lone Plains, Tsuyoshi's mana base allows what is otherwise a Red Deck Wins deck to borrow some great cards from one of its traditional enemies.

Now Boros Deck can't claim the broken mana advantage of Affinity. But Fujita's deck sure packs three main-deck copies of Kataki, War's Wage (Affinity's greatest enemy)! A solid 2/1 body for two mana, Kataki makes life very difficult for Affinity, especially if it comes down on turn two. As ever, strong burn cards serve as a great equalizer. It might not matter that the opponent can do a lot of Dredging if Tsuyoshi unloads with Firebolt, Lava Dart, Lightning Helix, and Pulse of the Forge.

So what does this have to do with Stone Rain?

Among Red Deck Wins' many losses coming into this format were Rishadan Port and Wasteland, the deck's key disruptive elements. With those specialty lands in the mix, Red Deck Wins could open on Jackal Pup and keep a deck like The Rock off its Ravenous Baloth mana until the arrival of a 4/4 for four was too late. However without those colorless compliments, Red Deck Wins in modern Extended runs the risk of losing to an opponent with more powerful creatures and spells. 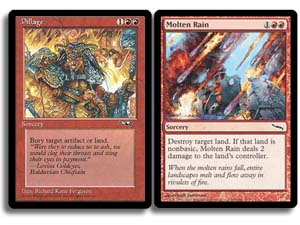 Fujita solved this problem by adding four Molten Rains and four Pillages - eight Stone Rains, more or less - to his main deck. As in the past, his Boros deck can start on a Jackal Pup (okay, a Savannah Lions), follow up with a , and then keep his opponent off his plan with Molten Rains until the Helixes start connecting.

Speaking of The Rock, two different looks at the broad green-black family represent "fair" decks that have proved capable of running with the best that the broken have to offer. Raphael Levy's Hypnotic Specter deck is a simple and solid build. Like many successful decks over the years, Levy's doesn't do anything particularly interesting or intricate. He simply has Birds of Paradise, Llanowar Elves, and Chrome Mox for consistent starts, and pumps into Hypnotic Specter, Call of the Herd, and Troll Ascetic on turn two.

Levy also has a very good supporting cast to go along with his solid threats. He plays both Umezawa's Jitte and Sword of and so that even his Birds of Paradise can potentially get big. Like many aggressive decks this weekend, Raphael uses Dark Confidant, a perfectly serviceable 2/1 for two, as his draw engine as well as a beatdown body.

On the other end of the spectrum entirely from Levy's deck is Jeff Novekoff's Living Wish Rock deck. While Levy supplements his more attack-oriented weapon of choice with four Duresses and four Cabal Therapies, Novekoff elected to run only two Duresses, and those are in his sideboard. Instead, the Pro Tour-Philadelphia standout is throwing elbows around the Pro Tour with what Randy Buehler called "the best sideboard in recent memory."

Novekoff's Red-white Rock deck - that's right, red and white splashes - has Dwarven Blastminer against players (like him) who are pushing their mana bases to the limit. He can block flyers with Silklash Spider, annihilate Onslaught's proudest tribe with Goblin Pyromancer, or ruin Affinity's day with Kataki, War's Wage. Most Living Wish players run a land or two in their sideboards… Jeff has the NO Stick-tapping Blinkmoth Well in his.

You want options? Novekoff's deck can basically do everything. You'd think that a Rock deck with access to both Apocalypse and Ravnica mana bases would run four copies of both and Overgrown Tomb… but not Jeff. How then would he have room for the quad Contested Cliffs that this deck packs? A dedicated Beasts deck masquerading as The Rock, Novekoff's "BigNTasty" runs four s (one as a Wish target) on top of four Ravenous Baloths. Few are the creature decks that can run with his giants.

Lastly, Novekoff's Rock deck is a forgiving mistress. If he ever falls behind, Jeff has the ultimate reset in , and a couple of Putrefies to round it all out.

As I write this, there are more than three rounds to go before the Top 8 is announced. We won't know what the absolute best decks to show up at Pro Tour-Los Angeles 2005 will be for a few more hours, but it's refreshing to know that in a world where Heartbeat of Spring can pump out huge storm Mind's Desires, From the Loam gathers cyling lands whose main purpose is to out more shots from from the Loam, and hasty Elementals kill on the second turn, that regular old - if solidly tuned - versions of the classic and "fair" decks still have a chance to shine.