The state of Constructed Magic has always been defined by the presence or lack of a dominant deck. Previous formats, such as 2004's Standard, ruled by Affinity, or 1996's Necro Summer, were sort of stifling. You had to make the classic metagame call—do you play the deck that defines the format, or do you play the deck designed purely to defeat it? In these formats, designers' talents showed through the little things that made the derivations of the same decks different. There were already accepted ways to build the decks, but the cards a designer put in the five or six mutable maindeck slots and in the sideboard could make all the difference. On top of that, preparation was much more focused. You really only had two or three decks to worry about. Simply playtest them until your fingers bled and you would be ready for the tournament. 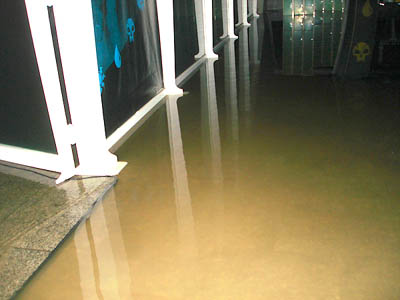 Whoever tapped UU for Flood has some explaining to do.Nowadays, though, Magic has made some serious strides toward opening up the doors of its Constructed formats. This Extended Pro Tour is the perfect example. There are a variety of viable decks, none of which is clearly the best. This makes for a format where a player could realistically expect to play against a different deck each round. Open formats like this allow deck design on a larger scale to be important. Now, it's not just the fine tuning that makes designs unique, it's the entire deck.

Despite the fact that wide-open formats like this are generally considered a design success, they make testing a nightmare. Just as dominant decks can stifle a format, the lack of one can open up a format so much, that the sheer number of options can be overwhelming. Not only do you have to find all of the decks available in a format, you have to select what you consider the best deck, and then prepare by playtesting it against the plethora of decks you decided against playing. Playing in these formats doesn't require more skill per se, but it does require a larger skill set. In a closed format like described above, a player could get away with either being a fantastic preparer and tester or a great deck tuner and builder. In the more varied formats, you have to be able to do both well.

Due to the emergency situation at the venue, Wizards of the Coast was faced with a unique situation—they had to cancel a day of a Pro Tour. This was the first time in PT history that a day had ever been cancelled. The forced decision had some rather serious implications. After all, they couldn't simply run the even from Saturday to Monday, and they couldn't just cancel the event. Some alternate structure would have to be found that would allow the event to be completed in just two days.

Most Pro Tour events are between 16 and 18 rounds long. The length of the tournament has the benefit of reducing the impact luck has on the event. A player has to get exponentially luckier each round in order to survive on luck alone. Each new set of circumstances has to be met and dealt with, and adaptation on this level requires skill to do consistently well. On top of that, even the most skilled player can be subjected to a round of bad luck. When this happens, the length of the tournament again favors the skilled player since more rounds means more opportunities to make up for the loss suffered due to bad luck. For a professional level event, skill should be the deciding factor, thus the long events are a blessing to the better players. This explains why you see so many of the same players at the top of the standings at all the Pro Tours. They are that good. They can't just be the luckiest players in Magic.

As the number of rounds decreases, though, the number of times a player has to get lucky to succeed decreases alongside. On top of that, there are fewer rounds available to use skill to balance out the effect of bad luck. This means that shorter tournaments have a tendency to reduce the dominance of the skilled player. Despite the more favorable conditions for luck to flourish, though, it still defies probability. Essentially, skill is still the most important aspect for a player to have. After all, would you rather be lucky or good? Personally, I'd rather be lucky and good.

The event coordinators here at Pro Tour-Valencia had some serious work cut out for them in deciding how best to proceed after it became clear that Day One was a no go. They knew that no one wants a format where they feel that luck trumps skill, yet at the same time, they were under time constraints. How many rounds were enough for players to feel that they had played for their chance to win? Could they justify extra long days to the players? How could they run a two-day event and not cheapen all the hard work that players had put into their preparation? Ultimately, they decided that the best way to enable the Pro Tour to continue and maintain its integrity was to treat it like another professional event with which they've had a large amount of experience—a large, European Grand Prix. 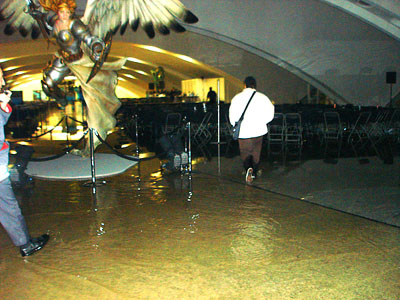 The water crept in Friday night, threatening Serra Angel.The judging staff and tournament coordinating staff for this Pro Tour happen to be mostly European, and consequently no strangers to large, professional-level events with time constraints. European GPs are known for their vast size and very long days. Since it's a system the staff is used to using, there won't be any adjustment phase. Euro GP's are efficient—when you're used to having to whittle a field of over a thousand down to eight, you learn to use your time wisely.

So the decision was made to turn Valencia into a two-day event, with 10 rounds of Swiss taking place on Saturday before the cut is made at 21 points. Three more rounds are set for Sunday morning before the cut to the Top 8. That schedule reduces the overall tournament from 16 to 13 Swiss rounds. All in all, this seems like a great way to run the event based on the constraints with which the tournament team has been faced. It allows for a large enough number of rounds to allow skill to be the major deciding factor.

As an aside, watching the decision making process from the inside has been very interesting. Wizards of the Coast goes into every event with contingencies planned in case something goes wrong. They've never needed them before, but that hasn't stopped them from making them. On top of having plans in place, they have a unique method of supervising the running of the tournaments that has all of the important coordinators and directors on-site for every tournament. This is especially helpful in cases like this where orders need to be given, and fast. They are on site, and consequently have first-hand knowledge of the problems and are able to delegate and enact their recovery plans with blinding speed.

Admittedly, though, I think things would have run just as well here without their presence. Most players never get to see the behind the scenes stuff that goes into making a Pro Tour run, but there is some intense stuff going on. PT's don't come premade in a box. The staff here is unbelievably ready to take initiative and get things done. Even before the meeting spelled out exactly how we were going to handle the situation, people began to pull things together and help keep things organized. Without that initial, unprovoked effort, this tournament might not have recovered as well as it has. It is a testament to the quality of employees Wizards has running its tournaments. Even without the head, the body keeps on doing what needs to be done. The fact that Pro Tour-Valencia isn't the first fully cancelled Pro Tour rests squarely on the shoulders of all the Wizards employees that took the initiative to start damage control before they knew how extensive it was.