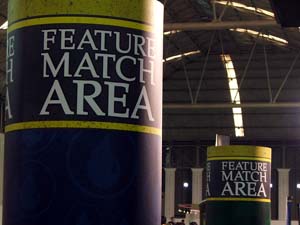 Feature matches only await players and spectators in this year's Invitational (May 10-12), surrounded by controversy. the weeks before this GP, one event has caused a lot of heated debate among the Magic community: This year's Invitational. After most ballots were decided, the Fan Favorite voting should decide about the last two players in this most prestigious event of the year. The vote was held on Wizard's website, but after it had ended it became clear that the votes had been manipulated on different levels. So the vote was re-run, and the second poll about who should be the two fan favorites was placed on the Wizards message boards, with the results open to see for everybody even before the vote ended.

One reason why the original vote had to be re-done were the methods players used to secure votes for them. The online community turned in particular against Geoffrey Siron from Belgium, who had posted requests for votes on multiple World-of-Warcraft message boards. Although this was not the only reason why the vote had to be re-run, it got the most attention.

In the second vote, located on the Wizards message boards, French and Belgian online communities mobilized a lot of votes to get their countrymen into the invitational against the strong competition of North American players, and again it was Siron who took most of the flak in the forum thread.

We had the chance to talk to Geoffrey about the issue. The Belgian emphasized that he did not cheat to gain votes: "I can understand that it looks like cheating, but it isn't." He did not break any rules set up for the voting process, Siron says. "Also, if you live in Belgium you don't have any chance to get voted in just like that." The competition from North American players was too strong, he thought, to get to the Invitational without some form of advertising. And since there were no rules to follow, Geoffrey asked World of Warcraft players to vote for him.

He explained: "I posted on a lot of World of Warcraft forums asking people to vote for me. I wasn't expecting anyone to respond, but almost all of them knew Magic and have played it before. People got back to me, asking about decks and advice."

Siron admits that in the hype about the second voting on the Wizards message boards, his "fans" went overboard: "The Belgian community voted for me multiple times, everybody, and they cheated. I didn't agree with that and I did not ask them to cheat."

The winner of Pro Tour London 2005 also expressed utmost respect for the Invitational, calling it "the highest point you can reach in Magic" and added: "It's so much cooler than winning a Pro Tour. If I could chose between winning a Pro Tour and having my own card, I'd chose the card."

But he would not want to use any illegal methods, or cheating, to get there. "I've never cheated in my life playing Magic, and I don't want people to think I am a cheater. I was even considering to drop from the Invitational ballot when I saw what was going on," said Siron.

The Belgian also criticized the way the second vote was run. After the vote had ended, all the votes which were considered fraudulent by Wizards were discarded, but it was shown how many "false" votes each player had received: Siron had the second-highest number of votes and the highest number of false votes. "It sends a false message", said Geoffrey, "I am worried what the people might think of that in general, and of me." He emphasized again that he did neither cheat nor endorse cheating.

Maximilian Bracht from Germany commented on the original vote and wanted it to be more secure: "They should verify votes with the DCI number." That is an idea that has also been tossed around in the forum discussions. Bracht also had something to say about Siron posting in the WoW forums: "That's just the lowest thing ever."

French level 6 Olivier Ruel, who also had participated in the debate on the internet, was more thoughtful in his comments. "What Geoffrey did was legal, but not in the spirit of the Invitational." The forum thread was even worse, said Olivier: "That was not the spirit of the Invitational at all." The thread had degenerated into mutual accusations especially between the French and Jeff Cunningham from Canada, who was on the ballot as well.

In regards to that discussion, Geoffrey wanted one point to be perfectly clear: "I don't want people to be mad about Jeff Cunningham. It was an abusive system, and he tried to keep it fair. I agree with him that the system is just bad, and I don't want anybody to be mad at Jeff at all."

The results of the voting as it stands now is final, and Geoffrey Siron will be invited to the Invitational because he did indeed receive enough regular votes to get a pass-down invite. Geoffrey was very happy about this, and is looking forward to the event. He already has a card in mind that he would like to see in print (a red creature with a special ability), and he is going to try and make everybody happy who voted for him despite the situation.

For future Invitationals, this year's Road Warrior Olivier Ruel has his own special ideas: "I think the best system would be to give about twelve slots to the best players from each continent, the top five in the Player of the Year race and the like, and play for the rest of the slots on Magic Online." He envisions all players of level 4 and higher to play in this Invitational qualifier, "and also some level 3's the people like." To spice things up a bit, Olivier also proposed to give one slot in the qualifier to the winner of an open Magic Online tournament: "One unknown guy could play among the best players of the world, and everybody could cheer for him!"