Most pros want to avoid green in Magic 2012 Limited. Sure they'll take the plunge when it becomes absolutely clear that the color is open, but until that point then they'll need to open something along the lines of Primordial Hydra or Garruk, Primal Hunter to strongly consider drafting green.

Want to see the chaos that ensues when a bunch of pros, who are otherwise adverse to drafting green, open packs that are full of good green cards?

Well look no further than the Draft Viewer from Table 1 of Draft 1 at Pro Tour Philadelphia to find out! 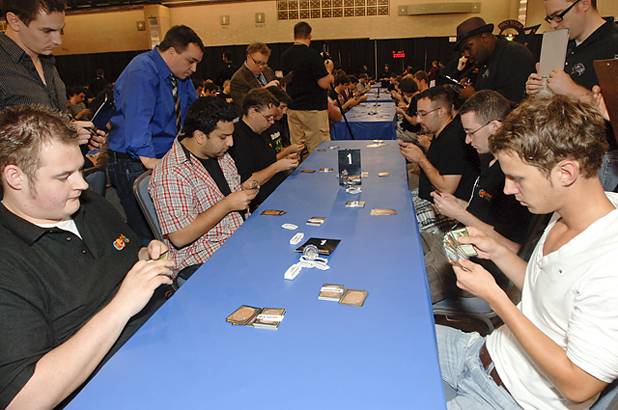 Up the left side of the table: Conley Woods, Ricky Sidher, and Luis Scott-Vargas took similar positions on drafting green.

Luis Scott-Vargas started the draft by opening up a pack with Cudgel Troll, and Dungrove Elder... and passed both of them to instead take a Consume Spirit. He began dabbling in green when he had to take a third-pick Lurking Crocodile out of an otherwise underwhelming pack. LSV added a couple more green cards to his deck towards the end of pack 1, and then found himself firmly in the much maligned color when he opened up a Garruk, Primal Hunter in pack two.

Josh Utter-Leyton, and Sebastian Thaler wound up drafting white-blue decks next to each other. Despite fighting over cards, they wound up with two of the strongest decks at the table, because they had each correctly identified that the colors were being underdrafted (Utter-Leyton ultimately went 2-1, while Thaler 3-0ed the pod).

Conley Woods passed a pack with Acidic Slime and Lurking Crocodile sixth, then started moving into green seventh pick when he got the Cudgel Troll that LSV opened, and ultimately wound up with a pretty poor deck in large part because he thought that he had received a signal that green was wide open. Under normal circumstances, getting a seventh-pick Cudgel Troll would be an excellent indicator that green is open, and a player would be foolish not to jump on it.

But, unfortunately for Woods, a number of other players decided to move into green after passing that Cudgel Troll around, making the late pick into a death trap instead of a boon.

Ricky Sidher, the player drafting to Conley Woods's left, moved into green when he got an Acidic Slime seventh pick. Had Woods taken the Acidic Slime sixth pick, instead of the Stonehorn Dignitary that he actually took, it's possible that the draft would have gone in a very different direction.

But as things turned out, Conley Woods, Ricky Sidher, and Luis Scott-Vargas wound up drafting green next to each other, and each of their decks suffered as a result. In fact, if any of Scott-Vargas, Sidher, or Woods had decided to move into green just a little bit earlier than they did, the domino effect would have been tremendous, and all three of their decks likely would have been better as a result.

Does that mean that they made the "wrong" decisions during the draft? Maybe—but only because they were surrounded by players who were executing similar strategies. The fact that none of the players at the table wanted to draft green actually caused green to be overdrafted. These players resisted the color initially, then thought they were receiving signals to move into green when they got passed things like seventh-pick Cudgel Trolls or Acidic Slimes.

Had the draft been full of players with different, or no, color preferences, then things would have played out very differently than they actually did. But as things stood, the players who steadfastly stood out of green were rewarded, while the players who switched into green late were punished.

The moral of this story? If you wait until what you think is the absolute last minute to pull the trigger on a color change, you will often find that your neighbors have made the exact same decisions that you have. And if this is the case, some very bad things are going to happen to your draft.