Fujita and Itaru Ishida are two of the most well-respected deck designers to emerge from the Japanese Magic scene. They have both been playing Magic since before the game was even available in their language - Ishida used to play with an English/Japanese dictionary - and have recently experienced success in the Extended format prior to the rotation. 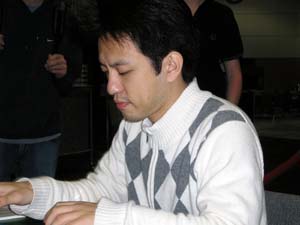 Tsuyoshi Fujita has been steamrolling through other Day 2 decks.

Both players designed updated versions of their most successful old Extended decks within the new parameters. Tsuyoshi Fujita finished ninth in Columbus and his Red Deck Wins listing propelled Shuhei Nakamura into the Top 8 of that same tournament. Updating a deck that relied on Jackal Pups, Wasteland, and many other rotated-out staples daunted more than one Pro team attacking this format but not Fujita.

It turned out that his updated RDW could put both he and Shuhei within shooting distance of the Top 8. Something Tsuyoshi never saw coming when he invented the decklist.

He calls it Boros Deck Wins although he was not sure if that was going to be an ironic statement or not.

"When I arrived here on Wednesday I played some games and I was able to win some of them with it so I though it would be good. But actually the deck turned out to be so strong."

What is that makes the deck so powerful? "The guild land - Sacred Foundry - when I use I don't get manascrewed. When my opponent uses it he takes two damage. It is very good."

Fujita's updated version of RDW includes 10 fetch lands and only 21 lands overall - a much lower count than many people feel comfortable playing with without acceleration of some kind. Fujita explained why his deck could pull off such a light land count.

"The old style Red Deck Wins had 24 lands but that included four Wastelands and four Rishadan Ports, not to mention Blistering Firecat and Cursed Scroll. The old type deck needed a lot of mana but now my deck contains only eight cards that cost as much as three mana and the rest cost either two or one mana."

Itaru Ishida won Grand Prix Singapore last year with his Gush-a-Tog build that was capable of playing a long Cunning Wish control game or an aggressive Gush fueled early game. While everyone assumed that Tog would be a popular deck for this event it would need to replace the card drawing it lost to the rotation.

"I thought there was a very interesting card to work with in From the Loam," explained Ishida. "I decided to make the deck around that card."

Itaru was uncharacteristically enthusiastic when I asked him if the from the Loam was replacing Gush from last season's version that won him GP Singapore. He lit up and nodded enthusiastically, "Exactly!"

Eight players in the tournament chose to pilot Ishida's -a-Tog build and 75% of them made it to Day Two. Many have fallen back in the standings although Kenji Tsumura was in an excellent position to make a run at a Sunday showing.

"If I could change anything I would remove some of the anti-affinity cards from the maindeck and move some sideboard cards in to replace them."

I asked him to specifically identify the maindeck cards he would change. Ishida smirked and looked down at the table - more than a little embarrassed