hundred ninety-nine players aged 16 and younger came to Baltimore, Maryland to compete for $100,000 in college scholarship and the title of Junior Super Series Champion. The format was Standard and they played 13 rounds over two day before cutting to the Top 8 players.

In addition to the scholarship awards for the top finishers, there were trophies handed out for the top finishing players in four age categories. The 15-and-older category would not be settled until the Top 8 bracket was filled in, but the others were clear after the Swiss rounds. 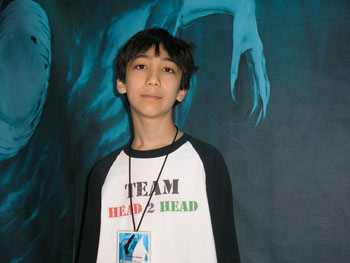 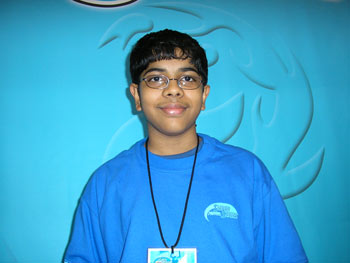 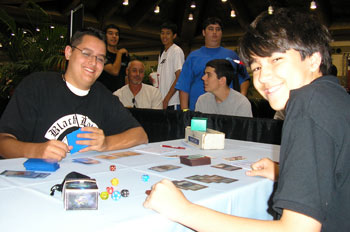 Sean won the first game after both players kicked up a cloud of dust over Sean's Vedalken Shackles. After a protracted counterwar, Sean's Shackles resolved, he stole Meloku, and never gave it back. Game 2 was also about Meloku. Bret ripped through his deck with Serum Visions to find Mindslaver after Mindslaver but really couldn't find anymore pressure than a lone Stalking Stones. Sean's hand was strictly reactive and the Mindslavers ended up being little more than Mana Shorts. Eventually, Sean countered a Meloku from Bret and untapped to play his own. 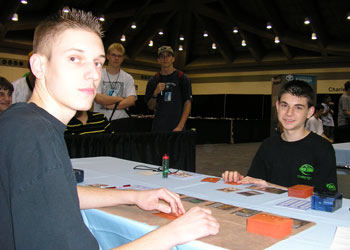 The first game was a fast and brutal affair with Brett locking Jason's mana down with three Plow Unders thanks to a little help from Eternal Witnesses. He topped it all off with a heaping plate of Godo smackdown. In Game 2 the Tooth player had the full Urzatron in play on turn four despite mulliganing to five and having one of the pieces Creeping Molded. This was Jason's turn to get the Witness/Plow Under action going and eventually Brett conceded the game. Game 3 was simple, old-fashioned mana screw as Brett kept a hand with one land, Bird, Top on the play. He didn't draw into anything for a couple of turns and Jason punished him with Reap and Sow and Creeping Mold for the win. 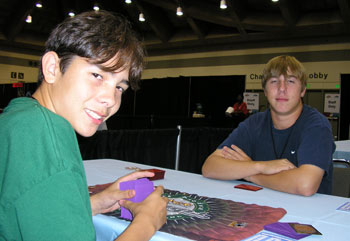 All three games came down to who got their mana control cards online first. In the final game Arthur punished Sean with Creep, Reap, and Plow Under but was only drawing land after land after land. Sean drew out of his problems and looked like he would advance to the finals when an entwined Tooth and Nail led to a hasty Colossus token smacking Arthur down to 11. He had enough mana in play that when he Topped into his own Tooth and Nail, Arthur was able to cast Tooth and Nail twice – he put an Eternal Witness into play with the first one. I'm not exactly clear on the details but he cast Tooth and Nail TWICE on one turn. How could he lose? 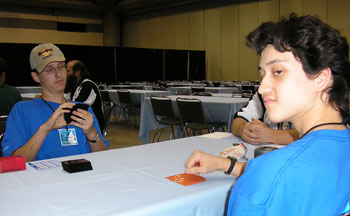 Jeff got out a pair of Damping Matrices early on but was a little light on the weenies his deck is famous for. Arc-Slogger may not have had any abilities to speak of but Julien found him more than up to the task of beating down. What happened in Game 2? Auriok Champion. In Game 3 Julian was faced with a pair of Glorious Anthems, COP Red, and an Auriok Champion with some other beaters. He was holding a pair of Seething Songs and was looking for a Goblin Charbelcher in the hopes of the "fluky win" right up until the end but he drew only land on the very last turn.

Jeff got out early threats under Sean's countermagic and beatdown with a couple of guys – Suntail Hawk and Auriok Champion – augmented by Glorious Anthem. Jeff double mulliganed in the second game and made a fair game of it but could only get Sean to 9 before Pottenger drew and played Meloku. Game 3 saw Savannah Lion, Savannah Lion, and Lantern Kami before Sean was able to stem the bleeding by countering Isamaru. There was really nothing that Sean could do and Jeff advanced to the finals.

I wasn't able to watch these games, but having seen the Tooth mirror countless times this weekend I can only assume it came down to which player drew into the best package of land destruction. Jason won in two games and advanced to face White Weenie in the finals.

Game 1 was won by Jeff despite a double mulligan; his two Lantern Kamis and a Blinkmoth Nexus found no more resistance than a couple of Plow Unders. In Game 2 Jason's mana flowed smoothly and Tooth and Nail resolved into Mephidross Vampire and Triskelion. Game 3 looked a like Jeff's first Game 3 in the Top 8 that had a pair of Lantern Kamis and a Leonin Skyhunter going all the way. Jason had the mana to do anything his deck wanted – he just didn't have any action cards to put it to use.

Congratulations to new JSS Champion Jeff Rabovsky of Naperville, Illinois. In addition to being the 2005 Junior Super Series Champion and the 15-year old division winner he banked $10,000 in college scholarship money. Perhaps the only person more excited than Jeff was his mom!

Tune into The Week That Was on Friday for a detailed look at the decklists and interviews with the players in the finals of the 2005 JSS Championships!