There was a considerable level of energy in the coverage headquarters Friday night when Kai peeled off six straight victories to sit atop the standings for the first time in what seemed like ages. In fact, to find the last event where Kai was on top at the end of Day One, you have to go all the way back to the very start of last season when Phoenix Foundation was in first place of Boston '03. 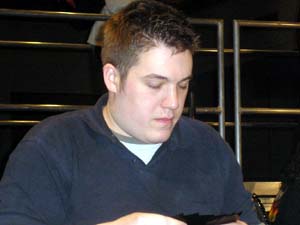 The day opened with much optimism for Kai's performance.

A combination of bad matchups and some very unfortunate mulligans found him standing along the rail after three rounds of Day Two action here in Philadelphia, an almost unthinkable scenario as we wrapped up the coverage the night previous. Winner of the Player of the Year race a staggering four times in his career, the tale of a revitalized Kai make a run at Level 6 for the next two seasons was the lead we all hoped to be writing Saturday night.

An intriguing subplot in his story was the deck Kai used to finish Day One in pristine condition. From the opening moments of the tournament, there was considerable buzz about his black-white control deck which featured a unique card engine in the form of Sensei's Divining Top and Journeyer's Kite - a combination of cards that was unexplored by 306 of the 311 players in the tournament.

After Kai fell beneath the wheels of the Mark Herberholz Express in round 9, I sat down to talk with him about his deck, his recent performances, and what the future might hold for the most successful player to ever play this game.

BDM: Can you tell me a little bit about the origins of your deck?

Kai: It's not my deck. A guy from eastern Germany built it and he went 0-3 drop. He played against White Weenie for the first two rounds and got unlucky in his best matchup. The other two people who played it both started 4-0; he was not too happy about that.

Stefan Heumann built the deck. Dennis Johannsen and I live close together and we playtested a lot. We actually put in the Final Judgments. Stefan originally built a mono-black deck but we didn't think that it beat creature decks enough so we put in the Judgments. They turned out to be really good in the control matchups as well - with all the creatures those deck use, like Dragons with abilities when they go to the graveyard.

BDM: How crucial were the maindeck Night of Souls' Betrayal?

Kai: That's the way you beat snakes -- it is really good against the Hana Kami recursion deck as well. I only played one Snake deck all tournament. I think there were a lot of Snake decks but they all lost pretty early. I'm not sure there were many on Day Two even.

BDM: When was the Kite/Top engine added?

Kai: The Kite/Top engine was in the mono-black version from the very beginning because there are not many other draw engines in this format at all. We knew we wanted to have Top but we also wanted to get lands because the deck is pretty mana heavy. If you manage to get down two or three Kites and a Top in the late game, you can virtually search up any card you need because you see so many different cards per turn.

BDM: Jumping topics for the moment, I was curious about your take on the Players Club that debuted this weekend.

Kai: I think it is really good for me right now because if you have 20-40 Pro Tour Points, it is very good. If it was implemented two or three years ago I probably would have been annoyed. It is probably still good for the people in second through fifth place but the guy who would have won the Player of the Year race is probably down $8000 a season because you only get $2000 for each of the Pro Tours where you show up since you would get the hotel and airfare from Player of the Year anyway. 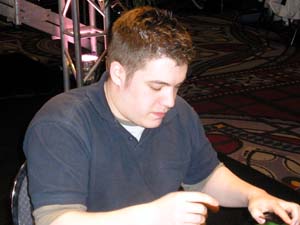 Kai worked on his deck with two other players, Stefan Heumann and Dennis Johannsen.

The people who are second through fifth in the race - it is the same for them. They make $12,000 in appearance fees and with the flight and hotel it is just like the End of Year payout. I think it comes too late. There would be a lot of people who would still be playing if the system came around earlier. People like Nicolai Herzog, Tomi Walamies, and [Jon] Finkel would all play in the PTs that were close to them if they were getting paid to show up. I'm pretty sure Finkel would be playing here in Philadelphia - it's not too far for him.

BDM: How much work did you put in for this tournament?

Kai: Basically, I playtested a lot more for Worlds but at the same time I did a lot more testing for this than I did for the Extended PTQ. I didn't feel like coming here and being unprepared, which seems useless. I only turned up for this PT because I wanted to make sure I was qualified for London. Otherwise I would have skipped. I don't really like flying for Block Constructed tournaments.

BDM: Your performances have been less than Kai-like over the past two seasons. What happened?

Kai: I think I have gotten fairly unlucky this season but the thing is that I got pretty lucky in the last couple of seasons, you know? I am pretty sure that I can win any tournament that I show up to if I get a little but more lucky.

BDM: You still have the same level of confidence that you did when you were running off all those wins?

Kai: Yeah, of course I do. I still think that I am technically excellent as a player. I still play Magic…I haven't stopped playing. I can't get lucky my whole life. Eventually I will be lucky again.

BDM: That's an interesting statement since you are the first thing people point to as evidence that this is a skill based game.

Kai: I think that the skill factor in the game was more decisive a few years ago. Now there are people who play eight hours a day on Magic Online. They did not have that opportunity four or five years ago. Maybe they got to play with people in their local store but I got to play four or five times a week with Marco Blume and Dirk Baberowski, which was a huge advantage. That is why I was that much better than your average PT player a few years ago. 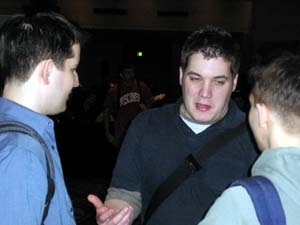 Kai's luck extended only to the end of Day One.

BDM: So there are more highly skilled players on the Pro Tour than there were a few years ago?

Kai: Right now the skill advantage is smaller. The average player who plays eight hours a day of Magic Online is just not that much worse than me. Like I would say in the past I would win 85 percent of those games against someone and now it is more like 60 percent.

BDM: You said that you don't like the idea of flying for Block Constructed. Why is that?

Kai: Two-set Block Constructed which is playable on Modo? Even the good teams like TOGIT were playing their decks under their regular accounts in Constructed 8-man tournaments online. They just didn't care - your deck is going to be out there anyway. Everyone will have everything.

Even if all the MTGO players were totally awful - and I don't think they are…I think most of them are really good - with 2,000 people playing in a premiere someone will randomly have found a good list and you can just watch the replays of the Top 8s. I think it is fairly impossible to have something unknown in a format like this.

BDM: So how is it that you and your friends came up with something that no one else here saw?

Kai: I don't know. The thing is that the whole Kite engine looks really bad on paper. I think most people were testing a lot for Snakes and White Weenie. What they don't realize is that in the end there would be a lot of control. It probably didn't seem viable to them and probably wasn't viable on MTGO because of all the aggressive decks. Usually all the gravy trainers end up playing the control deck and that is why our deck ended up being good.

Kai: The green-white-X decks with Judgment and Yosei is just like a bye. I haven't lost a game the entire tournament and it is fairly easy. The Gifts Ungiven deck is another really good matchup. I just lost to Herberholz with that deck but he was playing two Extractions and two Wear Away maindeck. That is what you have to do to have a chance at all. Usually they only have one of each but his deck was fairly well set-up to beat mine. If they only have one Wear Away, which most players I this tournament had - I think - then the matchup is like 60 percent. White Weenie is just about 30 percent. We weren't expecting so much White Weenie and we didn't have Hideous Laughter in the sideboard and I am pretty sure it should have three or four between the main deck and sideboard. 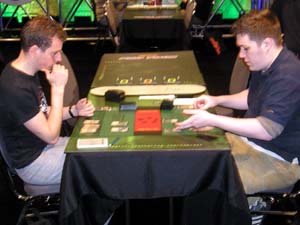 I'll take PT champs who start with the letter K for $100, please.

BDM: Is that the primary change you would make to the deck?

Kai: We had Rend Flesh in the sideboard which felt necessary because we didn't want to lose to Nezumi Graverobber and Shortfang. I saw one Shortfang the entire tournament. The Rend Flesh was just awful against the spirit-based White Weenie. You can barely kill a single thing besides a hound or Eight-and-a-Half Tails. Those should have been Hideous Laughter because they are good against the black decks too. Then you would have Judgment, Hideous Laughter, and Night of Souls' Betrayal and you should be fine.

BDM: Would you recommend your list to players looking for something to try during the PTQ season?

Kai: Not really. The PTQs are usually dominated by aggressive decks and this deck really wants to play against control every single round. Plus, I don't know how the time limits would affect things with Divining Top. Sixty-minute rounds might be enough but I definitely would not want to play this deck in a 50-minute round. Top should come into play tapped or something…it is virtually indestructible.