The 2005 Magic Player of the Year weighs little more than 100 pounds, but he can usually be found in any crowd by searching for the tuft of spiky, multicolored hair atop his head. Even though he lost his last round here at 2005 Worlds, Kenji Tsumura had just enough points to surpass good friend Olivier Ruel and lock up the Player of the Year title by one whole point.

We sat down with Kenji, the very first Japanese player to win the coveted award, and asked him a few questions about his year and his success. 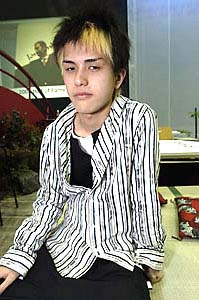 Q: How do you feel right now?
POY: I feel so ecstatic.

Q: Were you ever worried in your battle with Olivier and Masashi Oiso?
POY: They are both great players and have posted excellent results recently, so I was always worried. I lost to Ruel twice in Beijing, once with the Top 8 on the line and once in the Top 8 itself, and at that point it seemed like winning the title would be impossible. I was up until 4 a.m. last night because I couldn't sleep - my head was filled with Extended decks because I really wanted to make sure I had the best deck possible for today.

Q: Did this final grueling stretch of travel affect your play at all?
POY: I was so tired from the final few events, but I can finally sleep in my own bed.

Q: What is your favorite memory from your travels this year?
POY: I had my first Pro Tour Top 8 in Atlanta, and I was very happy to share the success with my teammates - that felt very important to me. Atlanta was actually part of a three-week travel stint to Seattle, then Atlanta, then Singapore, so it was tough, but the results were very pleasing.

Q: What are the secrets to your success?
POY: It is all because of the great decks that I got from Katsu Mori and Itaru Ishida.

Q: That can't be true - your play dazzles almost everyone who watches you, and even Mori hasn't had the same success as you have with his decks.
POY: No, no, it was all because of the decks. Before, Mori was thought of as a genius player, but he has only recently come to prominence as a genius deck designer as well and I am very happy to play his decks and help others realize just how good he is. 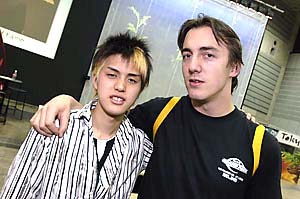 Tsumura and Ruel dueled down to the final point on the final day of swiss.

Q: Tell me your thoughts about Japan's success on the Pro Tour…
POY: I think it is excellent for Japan. Every Pro Tour someone got to the Top 8, and it's very good for the whole Japanese Magic community. When I talk to Tsuyoshi Fujita, one of the things we have discussed was how to spread out experience to the rest of the Japanese Magic players that are not as good right now. We are very interested in making the bottom of the skill pyramid here wider and helping the next generation of Japanese players.

Q: You mentioned Tsuyoshi. Who have been your Magic idols?
POY: Masashi Oiso, Mori, and Morita have all been my idols and my friends.

Q: What will you do now?
POY: I will work on staying on the gravy train next year. I would also like to make Day Two of a Limited Pro Tour, which I have yet to do. I only went 3-3 yesterday in Limited, so it's clear that I still have plenty of room for improvement.

Q: How does it feel to you to be the next Japanese Magic idol, and have young players everywhere look up to you?
POY: I am very happy, though I may have to try very hard to keep how bad I am a secret.