Feature: Learning From the Grinders 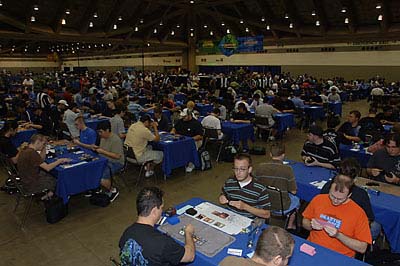 or those players coming to Baltimore without the virtue of a Nationals invitation, Thursday represents their last bastion of hope-the grinders. Single elimination matches decided by life total, the grinders are among the hardest tournaments to come out of unscathed. They are scheduled every two hours from morning until evening. The formats alternate between Standard and Sealed Deck allowing players to pick their poison. This also means that players have two rounds to get any losing out of their system if they want to play in the next grinder. Only 20 players survive the grinders and win their spots in Nationals, and hundreds more are left looking in, preparing their decks for the next grinder. However, for those who managed to rise to the top, they truly demonstrate that they deserve the place they have earned.

At the start of the day, Tarmogoyf was the man of the hour as every deck that qualified in the first grinder was playing the little beater. Not only that, but it managed to worm its way into three distinct deck types:

4 Life from the Loam 4 Edge of Autumn

However, as the day went on, its popularity seemed to wane. By the second Constructed grinder, it only managed to work its way into one of the qualifiers, and, by the end of the day, it was nowhere to be seen. Decks featuring Tarmogoyf were slowly replaced with decks featuring far fewer Forests and far cooler tricks.

As happens in tournaments like these, the metagame shifted constantly in reaction to what the field is presenting. As the day moved on and the hordes of Tarmogoyfs sent waves through the field, the other decks began preparing better for decks featuring the little monster. The successful aggro decks tended to be the Rakdos build, which featured more large burn spells, such as Demonfire and Char, as well as the card advantage powerhouse Dark Confidant. The control decks became more aggressive, slowing the opposition down and then playing the tempo game once control had been established.

Where Tarmogoyf had once ruled the world, it appeared that in the final grinder of the day, Aethermage's Touch had usurped the throne. Three of the qualifying decks featured Touch and used it and a plethora of creatures with good comes-into-play effects, as well as Momentary Blink to reuse them, to lock the game up. Nothing can be more frustrating than a Bogardan Hellkite that comes into play on turn four or five and then refuses to go away.

Amidst all of the Future Sight influence on the format, some old staples managed to make it back into the limelight as well. After a brief hiatus, Dralnu returned for another run in the sun, this time augmented with a bit more direct removal and the incredibly fun Epochrasite, both of which give the deck a bit more staying power in the early game than it had previously possessed. The Saffi-Crypt Champion deck-"Project X"-also popped its head in to snag a spot for one of its pilots.

After all was said and done, the grinders did what they do best. They helped define the probable metagame for the coming Nationals tournament, as well as providing insight to some possibly overlooked tech. With four qualifying Standard tournaments, the grinders provide a total sample size comparable to what most players are expecting for today. Studying the grinders, noting the decks being used, and learning the methods used by players to adapt to the shifting metagame are all essentials to succeeding here at Nationals. They also prove that the grinders are useful for more than just helping players qualify for Nats; they help anyone who qualifies and is willing to put in a little work to succeed.