Mirrodin has been besieged! Phyrexia and her evil ilk now run rampant over her once glistening landscapes, infest her once silver seas, and, predictably, have made their home in her stinking, sludge-filled mires. The time to fight has arrived, but resources are limited! With both sides fighting for dominance in this ravaged plane, it is up to the most adaptive, creative, and observant members of each faction to organize the war effort in these trying times.

Three recognized masters at dealing with the restrictions a Limited environment can impose are Brad Nelson, David Ochoa, and Steve Sadin. Hopefully, by this point, Nelson should need no introduction. He has been on fire in the past years, tearing up the tops of the standings, if not outright winning, most of the events he's played in. This weekend, he's even matched up against world-champion Guillaume Matignon to see which of the two of them will be crowned the 2010 Player of the Year. He is also the man responsible for spreading his drafting prowess via videos on StarCityGames.com. David "Webster" "The Ocho" "Good" Ochoa is another Limited powerhouse, famously dispensing wisdom on both Limited Magic and morality in his ChannelFireball.com series "According to Webster." Sadin is another who has learned the importance of spreading his knowledge to others. After all, you can give a man a deck, and he can win the draft. But teach a man to draft and he can make it to the Pro Tour. Sadin is the DailyMTG.com Limited expert in residence, serving up delicious, spicy nuggets of wisdom in his Limited Information column, appearing every Tuesday.

As I spoke to the three of them, it became clear that they completely agreed on one thing: Mirrodin had changed. Compared to the state of the format before the inclusion of Mirrodin Besieged, the format has slowed a step. Ochoa attributes this to a couple of factors.

"The format has definitely slowed some. With one less pack of Myr, a slightly higher median cost, and generally larger creatures, things just aren't as fast."

These changes have had another impact that contributes a great deal both to the speed of the format, as well as ability to succeed and fail in the format: the creation and destruction of stalemates. Unlike the previous format, creatures aren't nearly as homogenous in terms of power and toughness. Before, most creatures tended to the smaller size, often 1/1 or 2/2. While there were the occasional "dinosaurs," they fell well outside the curve. With fewer creatures to trade early, they have a greater chance to build up and clog the board. With the board clogged, it gets harder to poke through for damage, contributing to the slowing of the format.

One thing that has defined Scars of Mirrodin Limited thus far is the presence of very distinct archetypes. It reminds me faintly of Lorwyn Block Limited, where every draft tried to fit into either a race or class, sometimes both. For Scars, the delineations are infect, metalcraft, and everything else. Considering the card pool, a normal draft can only support so many players from each archetype. You will never see four dedicated infect decks in a draft. You won't see five players with metalcraft decks. What you'll more than likely see in these scenarios are unfocused decks that have had to pick up a few cards that diverge from their strategies because they couldn't pick up the cards for their deck. In this format, it's not really possible to be a half-infect deck. That's the one major difference between this format and Lorwyn. Then, if someone started cutting your Giants, you could switch to Warriors, since most of your Giants are already Warriors anyway. In addition, the penalties for being a half-Giant, half-Warrior deck are significantly less than they are for being half-infect.

"This is the only format I've ever seen that is so incredibly dependant on your first few picks. You have to make sure within the first three picks that you aren't being cut or hooking the guy you're passing to. If you pass three infect cards and then try and switch into infect once you realize it's open on pick four, you've already potentially passed three infect cards. That messes up your deck and the deck of the guy downstream from you. You are both going to end up with half a deck, and you won't be able to beat the good decks. You have to get along in this format." 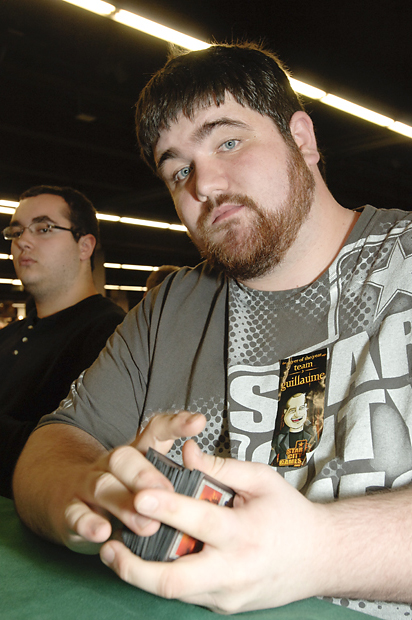 Brad Nelson: 'This is the only format I've ever seen that is so incredibly dependant on your first few picks.'

It was an interesting thought, and when I compared it to the cooperation of the Rochester Draft format, he said it was exactly like that, and reiterated, "You have to get along in this format."

Since the format seems to revolve around these archetypes, it seemed important to figure out how they changed with the addition of Besieged. As I said earlier, the major archetypes were metalcraft, infect, and everything else. All three players agree that metalcraft has gotten weaker.

As Sadin puts it, "Metalcraft has gotten significantly weaker, and I didn't think it was that great before. There's just more artifact removal, so metalcraft is harder to achieve and hold."

Nelson added, "With most of the good metalcraft cards in the second set of packs, you have no choice but to take the artifacts, which are usually subpar on their own, and then hope that you get the metalcraft cards to power them up. Even then, you're taking cards like Chrome Steed that aren't even really able to beat some of the more powerful cards where others are drafting those powerful cards. If you aren't able to keep metalcraft for some reason, you're just left with a bunch of mediocre cards that you built your entire draft around."

On the other hand, infect has gotten a facelift.

"It's more powerful, but slower," Sadin told me.

"Infect can support one more player in a draft now," Ochoa told me. "In addition, the creatures are bigger than their Scars of Mirrodin counterparts. I've also found that infect decks that aren't black-green are now much more viable. I've seen white-blue and white-black infect decks, as well as more green-blue now." 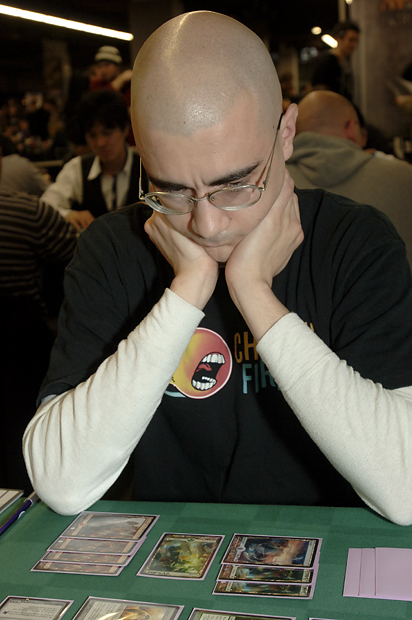 David Ochoa: 'Infect can support one more player in a draft now.'

Despite these changes, one thing has remained constant. Considering this is a Limited format, it is frequently going to come down to bombs.

"Scars of Mirrodin had a ratio of good rares to unplayable ones of about one to one. Mirrodin Besieged has a ratio of closer to two to one. That means the chances of running into a bomb rare have gone up," Ochoa explained.

"Yeah, this comes back to the stalemates," Nelson agreed. "Considering the bombs, a player's success in this format comes down to their ability to stall out the board and break it as needed, and to draw cards."

That brought me to my last question for these fine paragons of Limited knowledge. How have some of the cards we've spent the last few months evaluating and reevaluating been affected by the addition of new cards. Nelson is very clear in his opinion.

"Anything that says 'draw a card' has gotten significantly better. I'm talking cards like Culling Dais. You've got to get to the good cards in this format. I draw first a lot in this format, and I've even been known to remove lands from my deck when I'm on the draw, purely to improve the raw number of spells I draw. This format is about gumming things up and breaking through. You don't want things to slow down and then keep drawing lands while your opponent is drawing real things." 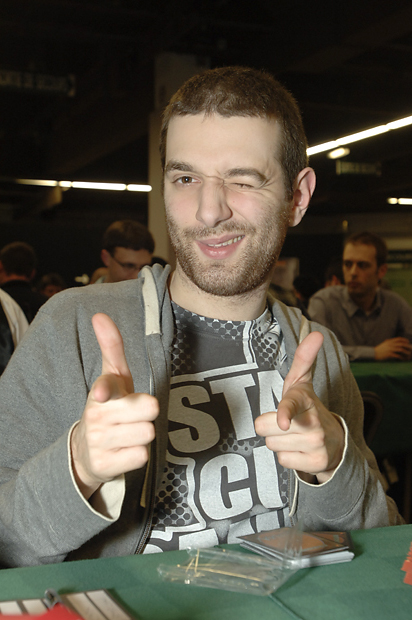 Steve Sadin: 'Any card that gives you card advantage has gotten better, even if the cost may seem a little steep.'

Ochoa simply felt that the cards that have improved are, for the most part, fringe cards.

"Most of the cards that I feel have improved or worsened happed to be fringe cards, things that end up maybe making the last slot in your deck or being important sideboard cards. For the most part they've gotten better, but some have gotten worse due to better options being available."

At the end of the day, one lesson that Nelson wanted to leave with people is the importance of synergy in this format.

I thought this was a little out of sorts with his analysis of metalcraft's waning power. After all, metalcraft is a quite linear mechanic, and linear mechanics are all about synergy between cards. When I pointed this out, he referred me to his other comments about the order of packs.

"When your cards are on average worse than standard cards, you have to always be in metalcraft to have the advantage. In general, that's hard to do."