Mark Rosewater wasn’t the only person to run a trivia game show at Worlds this year. Koichiro Maki’s ran on Thursday, and it followed a more tradition game show format, with the questions rising in difficulty and prizes going from one rare (after answering the fifth question correctly) to a thousand (after question fifteen).

The Magic Game Show had lifelines: a 50/50 option (two wrong answers got eliminated, leaving one right and one wrong answer), “Ask the audience,” and “phone a friend,” although the friend had to be in the audience. (And there wasn’t a phone.)

Before the first game, Maki played Jan-Ken-Po (Rock-Paper-Scissors) against the entire crowd. Everyone who tied or lost had to sit down. Then he played again against the people who had beaten him. He repeated this until there were only two people remaining. Then they played each other for the right to play for ... a THOUSAND RARES!

This happened twice, so we have two sets of fifteen questions created by Rich Hagon. Enjoy! And remember, they get harder as you go along. 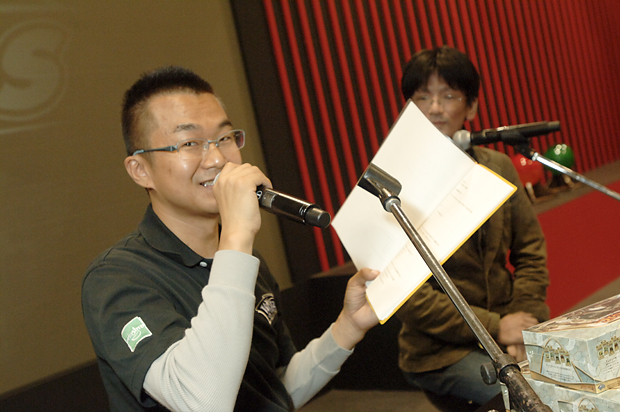 1) Which of these is the name of a popular card game?

2) Which of these did Richard Garfield create?

a. The Internet
b. Shoes
c. Conversation
d. Magic: The Gathering

3) After the World Championships, how many events will be left in the 2010 Player of the Year race?

4) What comes after White on the color wheel?

5) What is the name of the next Magic set? (for one rare)

6) What rarity is Skithiryx, the Blight Dragon? (for two rares)

7) In which country did Magic start its life? (for four rares)

8) What keyword is on the card Ball Lightning? (for eight rares)

10) Which of these cards has a collector’s number of 1? (for thirty-two rares)

a. Boreal Griffin (Coldsnap)
b. All Is Dust (Rise of the Eldrazi)
c. Ajani’s Pridemate (Magic 2011)
d. Arrest (Mirrodin)

11) Tarmogoyf gets bigger according to how many card types there are in graveyards. How many different card types make Tarmogoyf bigger? (for sixty-four rares)

13) What was the name of the first Planeswalker novel, written by Ari Marmell? (for 250 rares)

a. Test of Metal
b. The Purifying Fire
c. Agents of Artifice
d. A Pride of Leonin

14) Which of these is Riccardo Tessitori of Italy best known for? (for 500 rares)