Day One of the Magic Online Championship ended with a five-way tie for first place. Considering there are a total of twelve people playing in the event, I think we could safely describe that as a five-way love cluster.

You see, the Magic Online Championship has a unique points structure that rewards great results in one format over consistent play in all of them. However, after the four rounds of Day One, nobody had managed to take advantage of this, and everyone had at least one loss.

Iyanaga kept his options open, first picking a Manor Gargoyle, eventually settling into Blue-Green with a splashed Devil's Play he picked up a couple of picks into the third pack, but still lost in three games to Duke's powerful Black-White deck, featuring Reaper from the Abyss. 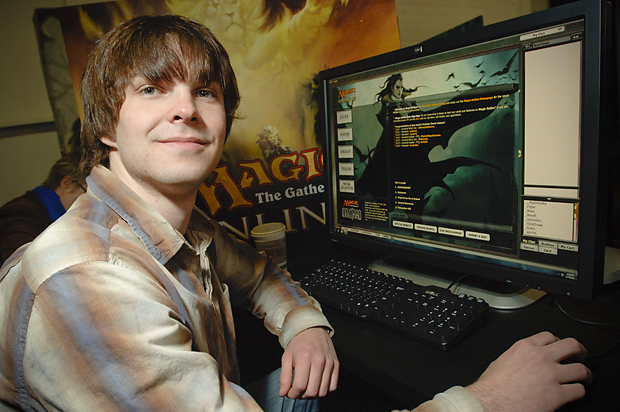 Reid "reiderrabbit" Duke wins his fist Limited match of the day with the help of Reaper from the Abyss!

In the other pod, Caplan's aggressive Red-Black deck stumbled against Burton's Green-White, splashing Brimstone Volley, while Pils used his Blue-Red deck to give Bing "prolepsis9" Luke his third loss in the tournament. That now left only three players tied for first.

With so few people in this invite-only tournament, the pairings began to spread further than just to players on similar points, allowing all three points leaders to preserve their lead by taking down some of the players chasing them. Duke beat Jörg "ponza" Unfried, who had finally managed to get some points on the board in the first round, after a disastrous Day One. Burton beat Andrew "Gainsay" Cuneo, and Pils took down Yuki "yoshidora" Yoshioka.

It was crunch time, with Burton facing Pils to see who would remain at the top of the field, while Duke duked it out with Thoralf "Toffel" Severin. 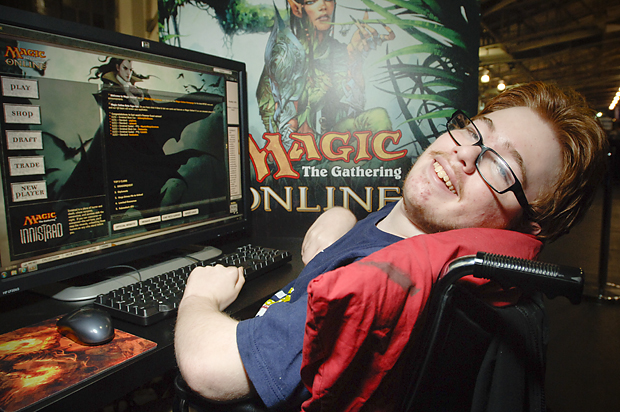 Brandon "sandydogmtg" Burton faces off against Florian Pils to see who will stay in the lead.

Burton got off to a flying start in game one, with Doomed Traveler, Chapel Geist, and two Voiceless Spirits, quickly putting Pils on the back foot. He battled back, using Sensory Deprivation on the Geist, a Dead Weight on one of the Spirits, and summoning some flying men of his own: a Mindshrieker and Moon Heron. However, neither could hold a flame to the Voiceless Spirit, thanks to it striking first. Finally, Pils found a Murder of Crows and a Civilized Scholar, and the tides turned. It wasn't long before he was able to grind out the first game in his favor.

Game two seemed to start better for Pils, with Burton stuck on two Forests and an Avacyn's Pilgrim for mana. However, a Gatstaf Shepherd soon revealed its true colors (still green, actually) and Burton struck into Pils's life total. Pils tried to fight back in the air, finally neutralizing the Shepherd with a touch of Claustrophobia, but a timely Slayer of the Wicked from Burton destroyed a key Stitched Drake that had been kept back to block, and the match was evened out at one game apiece.

Burton again looked good in game three, summoning three Voiceless Spirits, and taking down Pils's Murder of Crows with a Smite the Monstrous. Pils would have none of it, sneakily using Shimmering Grotto to cast a splashed Unburial Rites on the Crows, and flashing it back on a Stitched Drake. To make matters worse, he soon found a Geistflame, which tore apart Burton's air force, giving Pils the match.

It's amazing what another day can do, with the five-way tie broken by some good, ol' fashioned draft battles. Left standing at the top of the field were Reid "Duke" Duke, and Florian "Pils" Pils, still tied for first place. Behind them, Brandon "Burton" Burton, and David "Caplan" Caplan were tied for third place, which incidentally, is also where Caplan is sitting in the World Championships this weekend. I think it's safe to say, he's probably quite happy about that.

Tune in tomorrow while we take a Modern approach (get it? because they'll be playing Modern!) to Magic Online to see who will fight in the finals on Sunday morning.

1 Reaper from the Abyss
41 Cards

1 Reaper from the Abyss
62 Cards

1 Into the Maw of Hell