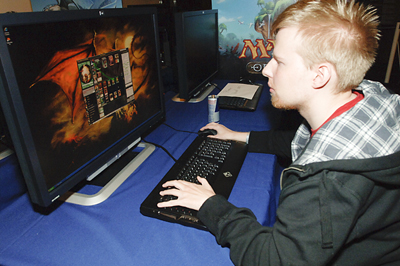 Finalist Anssi Myllymäki (Anathik)As the third and final day of the main individual competition drew to a close, the Magic Online Championships entered its final format: Standard. Eight competitors vied for a spot in the Finals and a shot at $13,000 and eternal Magic Online glory.

Coming into the evening, the favored contenders were Japanese former Pro Player of the Year Shouta Yasooka (yaya3) and Finnish newcomer Anssi Myllymäki (Anathik). The two were neck and neck coming into a full three rounds of Standard. They were looking to extend their lead and keep those close on their tails—like fierce fellow competitor Robert Jurkovic (jurda)—from overtaking the top spots.

Unlike in the individual competition in the Worlds main event, the Magic Online Championship allowed the competitors to run a different Standard deck between the Swiss and the Finals. This meant that six out of the eight players opted to run Jund in the Swiss. Not only is it an outstanding deck with a host of powerful cards, but the likelihood that something would “go wrong” was much lower due to its relatively consistent performance even in the face of hate. The other two chose decks known for their game against the format’s black-red-green monster—Federico Rivero (CharToYourFace) chose Bant, and Stefan Steiner (tomy vercety) played a red-white-blue control deck sporting only shroud creatures in Wall of Denial and Sphinx of Jwar Isle.

Steiner’s deck had a great game against the Jund decks, as evidenced by his match against Myllymäki in Round 2 of Standard. Despite Myllymäki’s early Blightnings and Sprouting Thrinax, Steiner had a Wall of Denial denying access to his life total beyond direct damage. With two Spreading Seas and an Ajani Vengeant keeping Myllymäki off of black mana, Steiner just needed time to protect his ‘walker ... or he needed one of his Sphinxs to close the game. When Myllymäki ripped Bloodbraid Elf into Lightning Bolt to take care of the planeswalker, Steiner was metaphorically tapping the top of his deck looking for answers. The answer came in the form of Sphinx of Jwar Isle ... peeking at another Sphinx of Jwar Isle on top! Myllymäki made an excellent play by pointing Maelstrom Pulse at his two Thrinaxes to try and leverage more damage, but in the end, 10 points of shrouded flying damage took it home. 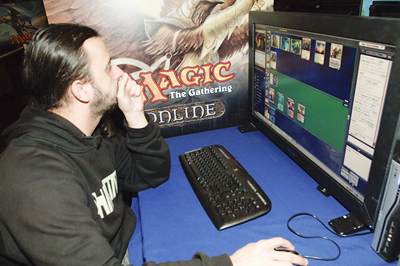 Robert Jurkovic, a.k.a. jurda, missed the Finals on tiebreakers.The big story of the evening was Jurkovic, who through tight play and careful positioning beat frontrunners Myllymäki and Yasooka in two Jund mirrors. In his final match, making a bid for the Finals, Jurkovic faced Rivero’s Bant dec—normally a difficult matchup for the format’s de facto best deck. He was able to leverage Lightning Bolt for full value, however, blasting Rivero’s turn one Noble Hierarch both games to take the match 2-0. Rivero looked take it back after a plethora of removal took down his creatures when he ripped Ajani Goldmane and began ramping to an Avatar ultimate. Jurkovic had an excellent counter-rip, however: Slave of Bolas. With Rivero’s only defender, Knight of the Reliquary, switching teams and betraying his planeswalker ally, the player from Uruguay was forced to concede.

In the end, despite his perfect performance, Robert Jurkovic (jurda) was unable to overtake Anssi Myllymäki’s (Anathik) lead due to Myllymäki’s impressive Day 1 start. Sneaking in on tiebreaks despite a 1-2 performance last night, Anathik will face powerhouse Shouta Yasooka (yaya3) in the finals today. Stay tuned for full coverage of the best-of-three Standard match for the title of 2009 Magic Online World Champion!

The final standings, before the finals playoff:

1 Brave the Elements 3 Path to Exile

3 Master of the Wild Hunt
71 Cards