any of you may not recognize Kellen Abel's name (yet). If you were watching the Nationals coverage very closely, you may have noticed his name in the standings from Day 1 (that's it there, in 189th place with 3 match points). Three match points? You might wonder what this guy is doing with his own feature story?

BUT! His record at Nationals is a bit misleading. Kellen, a 19-year-old college student from Washington, came into the weekend unqualified for Nationals, something that would worry most Magic players. Not Kellen. You see, Kellen had managed to narrowly skirt the new age requirements for the Magic Scholarship Series, turning 19 after qualifying. That meant he was eligible to compete for the Championship in Baltimore whether or not he managed to qualify for Nationals. This is a scenario that has happened before … a Scholarship Series competitor, knowing they're Q'ed for one tournament on the weekend, takes the chance to grind in for "free" at Nationals then plays the first day to see how they're doing at that tournament with the MSS as a backup. However, Kellen's story is a bit more unique, as he explained.

"I was qualified for the MSS coming in to the tournament, so I ground in to Nationals to playtest."

"Yeah. After my first round [at Nationals], I told myself that no matter what in Round 2 I was going to keep my opening hand. I lost after keeping some odd hands, but only barely so." In Round 3 he admitted he had conceded to Antonino de Rosa, the friend of a friend and a bad matchup anyway. "Today in the MSS, I actually lost to Ant's friend playing a copy of his list," Abel added. 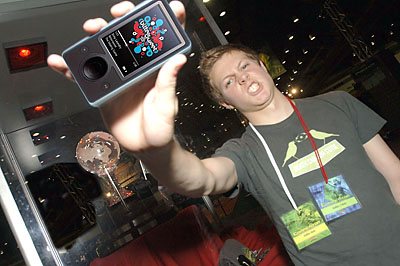 Still, being qualified for U.S. Nationals via a tough tournament circuit appropriately titled "the meatgrinders" and being qualified for the MSS Championship were not enough. After winning an 8-person Standard tournament using a Blink list he got from friend Gavin Verhey, Kellen signed up for another side tournament, a Standard event whose prize was a Microsoft Zune. One problem: because the tournament started after the main festivities had ended it promised to finish late in the evening. That still didn't stop Abel from continuing on a roll, jumping to a 7-0 lead before losing in the final round to end at 7-1. Fortunately for him, his tiebreakers held and he managed to walk away with the mp3 player.

After all of that, Kellen revealed why he was playing the MSS Championship instead of giving an honest go at U.S. Nationals "The payout this year is better for the juniors. I need the money for my senior year at college."

"Yeah. I earned a lot of credits in high school. I don't know. I might stick around for an extra year though."

We can't make this stuff up. The only downside in all of this is that Abel's laptop, an Apple, isn't compatible with the Zune software. Somehow, after everything Abel has managed to accomplish so far, I don't think he'll mind all that much…