It only makes sense to start with the Champ. Kuldotha Flamefiend may have been the splashiest card for Sharfman as he steamrolled the Top 8 in nine straight games, but it was his Puresteel Paladin deck in Block Constructed that got him to that point. Designed by brewmaster Mark Herberholz, the deck cuts to the heart of the format. It enjoys the benefits of a very aggressive strategy topped by four Sword of War and Peace, a card that grants protection from roughly half the metagame.

It's the Paladin that really puts it over the top. It isn't uncommon for the deck to play a Sword on turn three, equip it for free thanks to metalcraft on the Paladin, and then attack for what quarterfinalist Pat Cox called "about a thousand damage." Hear all about the deck in this interview.

Michael Jacob came to the Pro Tour with an under-the-radar draft strategy: a low-land, hyper-aggressive white deck that hinges on early drops and Phyrexian mana discounts. The seemingly innocuous Suture Priest does a lot to make the deck hum. It puts pressure on the opponent early, and coupled with an early rush it puts a severe limit on the enemy's late-game. Also, because the deck runs so many Phyrexian-mana cards, the life-gain is actually quite important. Check out the in-depth guide to the strategy in this article.

The reason this card is so important, though, is because of the effect that strategy had on the Top 8 draft. Three players were so impressed by the strategy that they came in planning to force it. Unfortunately for them, they were all sitting next to each other, and the packs conspired to give them just enough rope to hang themselves. While that ruckus was going on, the other drafters at the table scooped up some very powerful cards. You can read more about that particular train wreck in Steve Sadin's Top 8 draft analysis.

In stark contrast to the Suture Priest strategy's blistering beatdown, finalist Toshiyuki Kadooka put together a draft deck with a more controlling frame of mind. Taking a base of black and green, he used a pair of Viridian Emissaries to help splash a trio of powerful weapons: Vedalken Anatomist, Phyrexian Ingester, and Treasure Mage. This last served up his deck's most powerful weapon, the Thopter Assembly.

If you've never had the pleasure of untapping with the Assembly in play, you're really missing out. Ten points of power in the air is an awful lot. If they find an answer later, you're still left with your Thopters. Of course, Kadooka had planned for that contingency, protecting his investment with both Spellskite and Entomber Exarch. See how he put it all together in the Draft Viewer.

The Assembly was instrumental in Kadooka's four-game victory over Luis Scott-Vargas, whom many believed had drafted the Top 8's best deck. In discussions after the draft but before the quarterfinals, the consensus was that if it wasn't LSV, it was David Sharfman.

The prevailing wisdom of the format was that the difficult mana-fixing meant that monocolored decks would rule the day. Tsuyoshi Fujita's Four-Color Control deck bucked that trend, but the rest of the Top 8 were right in step. Quietly coming out on top thanks to that fact is the little land that could: Inkmoth Nexus.

Lands that have abilities act like they're giving their decks an extra card. Instead of drawing that seventh Mountain, you get a creature! A 1/1 infect flier might not seem like much (outside of Gaudenis Vidugiris's Mono-Black Infect deck, that is) but the white decks have either Equipment or Tempered Steel, meaning that the Nexus can put the opponent on a very quick clock. Even in the red decks (whether Big Red or Kadooka's Kuldotha Red), the flying infect creature can protect Koth for crucial turns.

You might want to remember Fabian Thiele's name. This weekend was just his second Pro Tour, and he played in the Top 8. He finished 20th at his first. He plays with a dedication and focus that are the hallmarks of the game's top players. In his mind, though, he's still just another Magic player.

While other players might have been totally caught up in the competition, struggling with the mixed emotions of making a Top 8 and missing the trophy, the first thing on Thiele's mind was how much fun he was having. As a memento of his weekend, he got the rest of the Top 8 competitors to sign the Elspeth Tirel he drafted. This simple gesture is a poignant reminder that whether we game around our kitchen table or on camera in the Pro Tour final, what unites us is the game we all love. 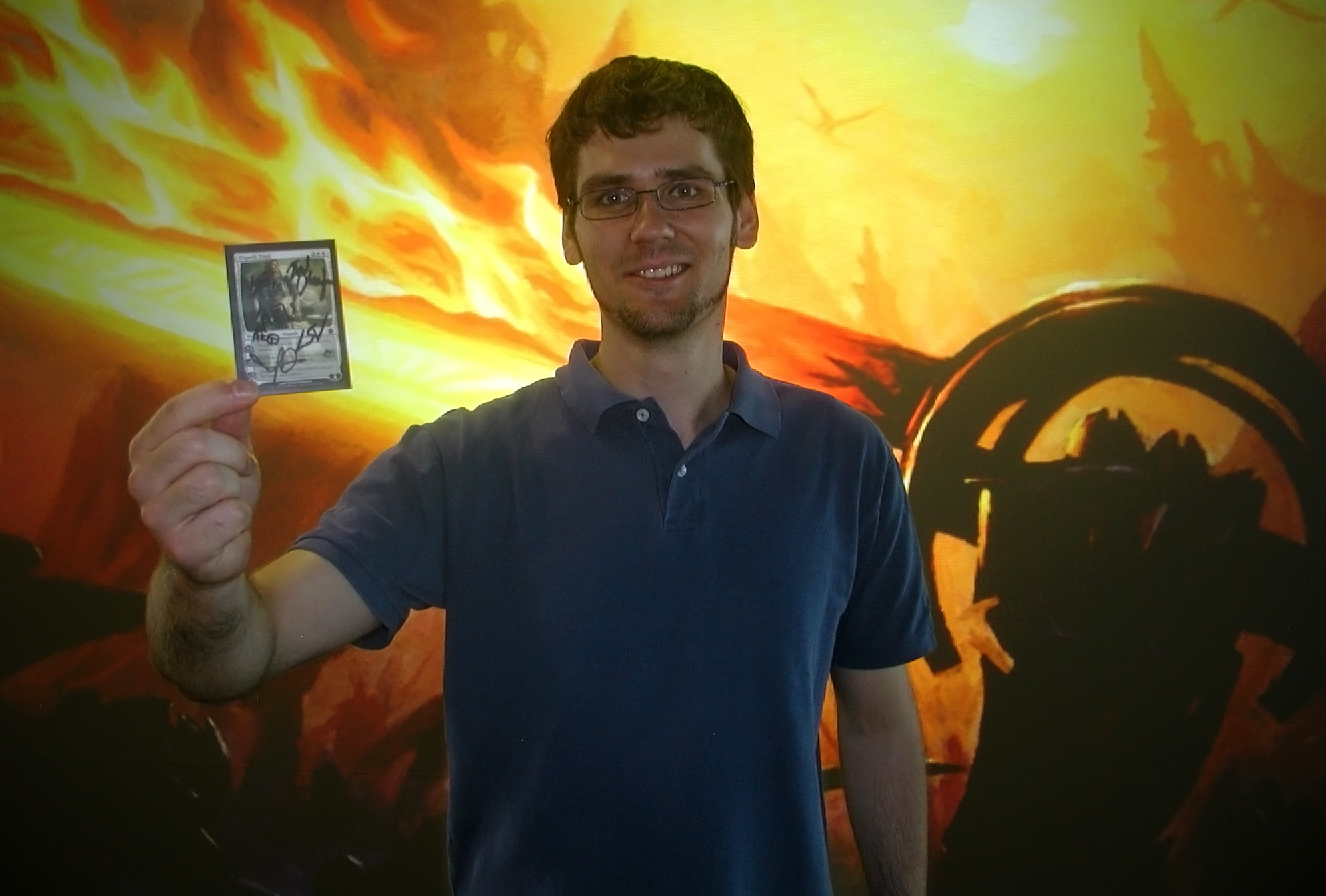