Massive Magic is becoming a fixture event at the Pro Tour. On Saturday after the Top 8 has been decided, part of the spectator area is converted into a giant playmat and a crowd gathers in hopes of being chosen as one of the players of the monster oversized game. Each player is matched up with a member of R&D and together they make the decisions for their hordes of loyal volunteers. The three teams were Team Lady Luck (Nia Barrows and Mark Globus), Team Belgium (Dubuisson Aurelien and Tom LaPille), and Team Nagle (Matt Gedvilas and of course Ken Nagle). 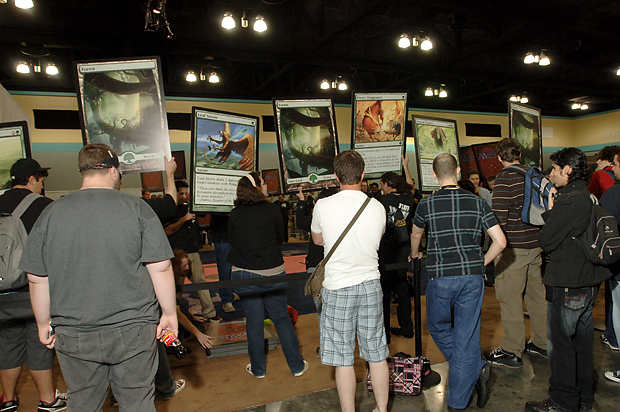 Here we see the first round of volunteers as the opening hand for Team Lady Luck. This weekend two new twists were added. First, it would be a three-player game instead of a straight duel. Second, they would be playing with the Planechase Variant, the projection screen showing their current plane. They began in The Great Forest, but a successful planeswalk roll soon changed that. 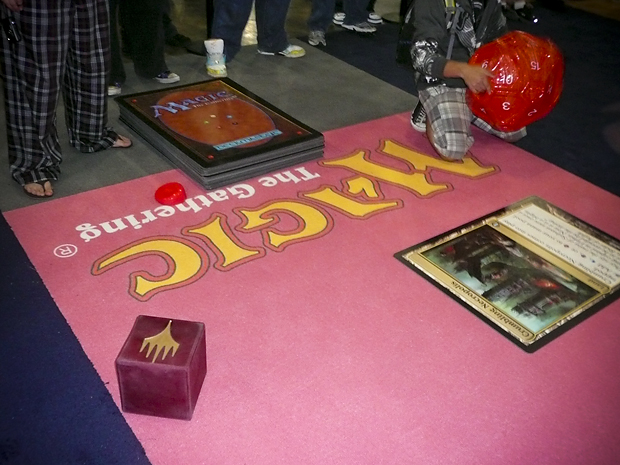 First they wound up on Rabiah for a turn, then moved on to The Aether Flues. 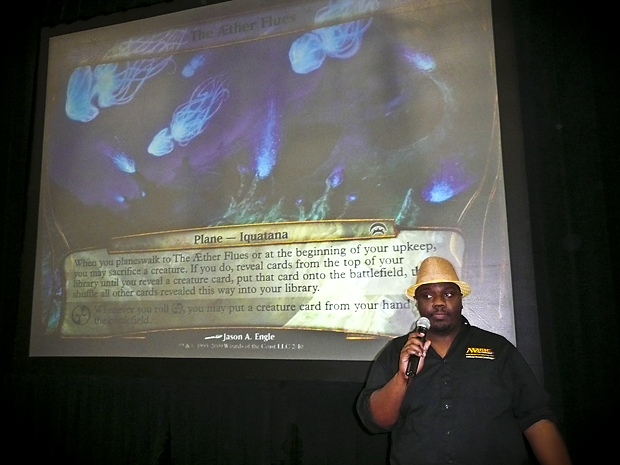 Here we see Emcee Rashad Miller unnerved by this plane. While there, Team Belgium used the Flues's ability to turn their Elite Vanguard into Apex Hawks before planeswalking away. 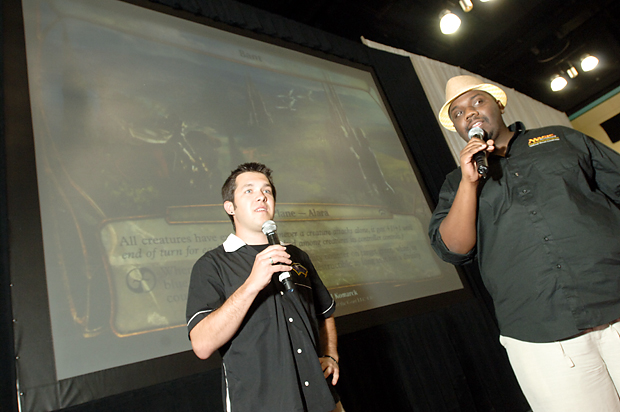 Eventually they settled on Bant. Rashad and his co-host Matt Danner explain what that means to the players. ALL creatures have exalted? Don't mind if we do! 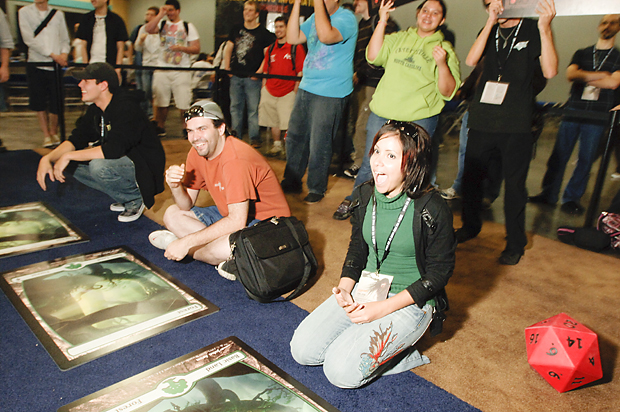 Team Lady Luck got an early advantage with a turn-two Explore. Here we see some VERY happy forests. 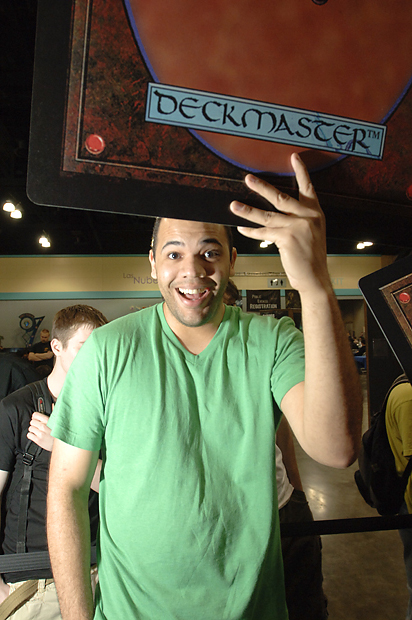 Even Pro Tour Venice Champion Osyp Lebedowicz showed up, as one of the cards in Team Nagle's hand. When Team Belgium took advantage of Team Lady Luck's acceleration by playing a Knight of the White Orchid. Team Nagle had a response. 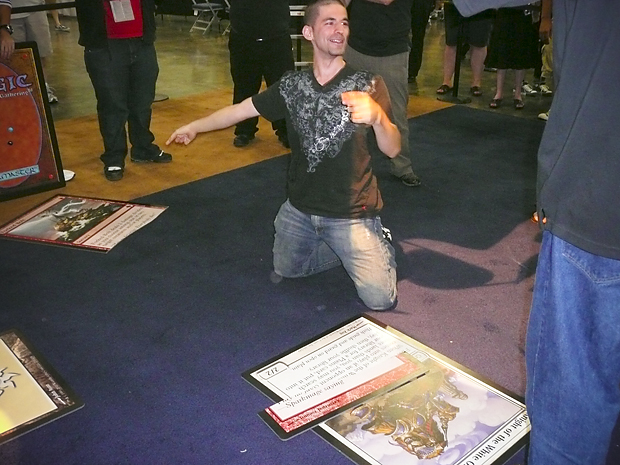 Forked Bolt! Unfortunately for them, it was played with such force that it was actually split. Here we see the Knight of the White Orchid arguing that he clearly only took one damage. Corrupt Referree and Magic Editor Matt Tabak agreed. 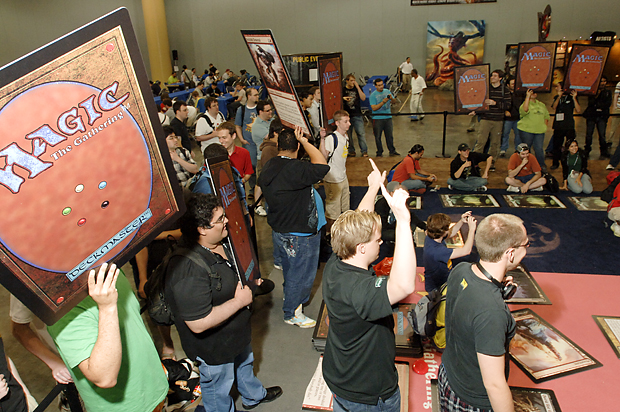 Team Lady Luck took advantage of their four mana and cast Garruk Wildspeaker, getting themselves a beast. Here we see Team Nagle explaining to Team Belgium that they really, REALLY need to kill the enemy planeswalker. Team Belgium agreed, killing Garruk with an overhead attack. 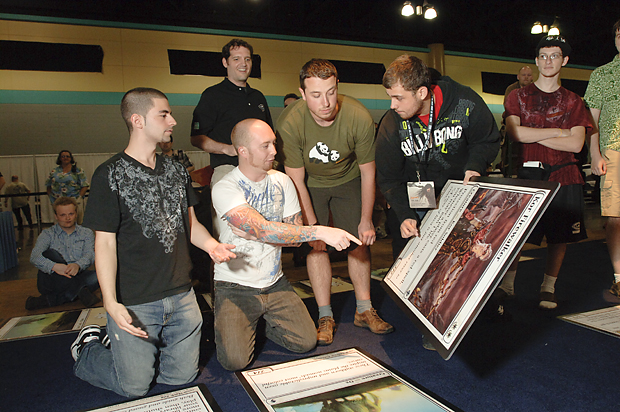 They followed up with Kor Firewalker. 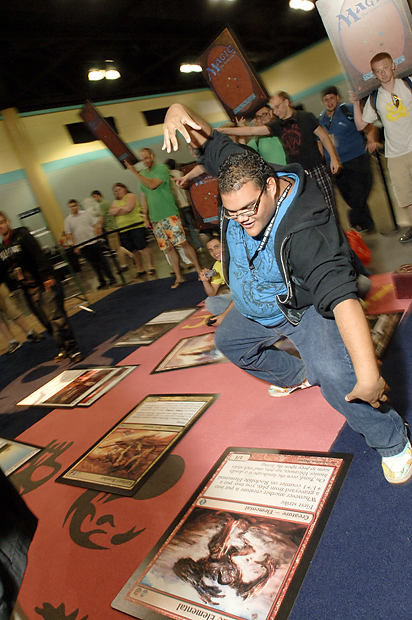 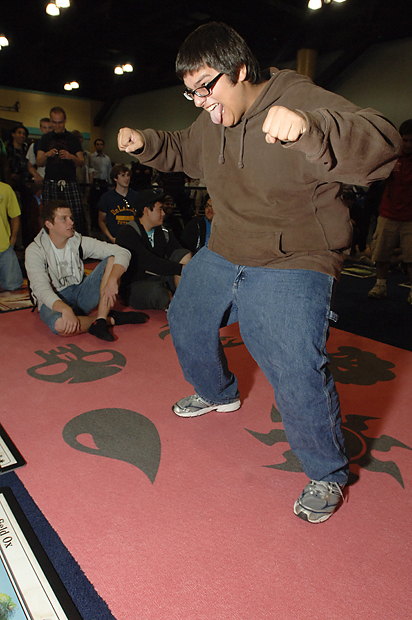 Not to be outdone, Team Lady Luck cast Bestial Menace. This dude knows how to be menacing. From there, things got crazy. The planeswalking die brought them all to Sokenzan, where creatures are bigger and hastier, and Team Belgium had just the card to take advantage of it... Captain of the Watch!

Suddenly they had a ton of hasty, vigilant soldiers, and wasted no time swinging at the hated Team Nagle. However, their anger was tempered with mercy, and they let Team Nagle survive at one life. They rolled the planeswalk die, unwilling to let anyone else enjoy Sokenzan's benefits, and rolled Chaos, giving them a Relentless Assault. They shared the pain with Team Lady Luck. 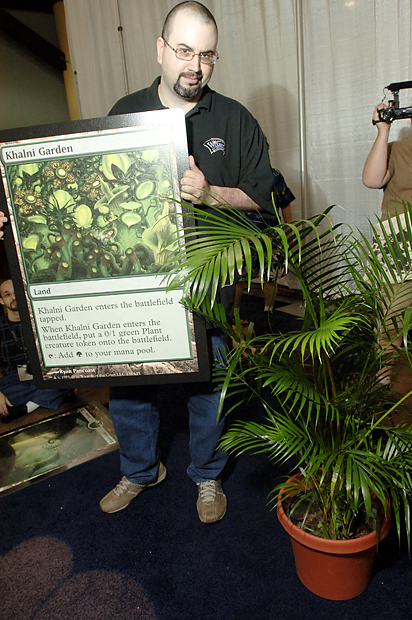 Here we see Team Lady Luck's response: A mere Khalni Garden, and its plant token. As the night was going long, and Team Belgium clearly had the game wrapped up, corrupt referee Matt Tabak called the match. 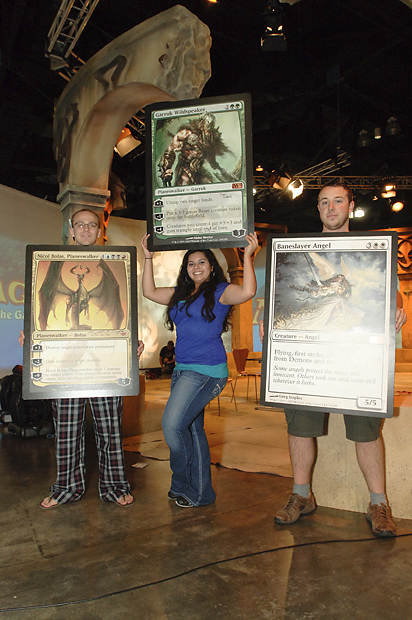 For their efforts, the three Team Captains got to choose a card out of their decks to take home. Dubuisson Aurelien, captain of Team Belgium, chose Baneslayer Angel. He came to San Juan to play in the Pro Tour, his first, and so naturally the best part of his weekend was making the cut to Day 2. He played Boros in Block Constructed and wound up 132nd.

The nefarious brains behind Team Nagle, Matt Gedvilas didn't come specifically to play in the main event, even though he hoped to. With such a short flight to the Pro Tour, he and a group of friends decided to come down for a weekend of gaming. Even though he didn't win a Last Chance Qualifier, he said he had a blast drafting and playing in side events, especially Legacy. His favourite part of the weekend was heading home with a giant Nicol Bolas.

Last but certainly not least was the head of Team Lady Luck, Nia Barrios of Bloomington, Illinois. She came to San Juan with her boyfriend Adam Hoefler to celebrate their four year anniversary. They arrived on Tuesday and spent their time sightseeing, visiting the rain forest, and going night kayaking. The Pro Tour may come second to all that beauty, but she said she had a great time on site, and especially loved meeting the artists, Aleksi Briclot and John Avon.

All the industrious cards and tokens also got a small reward for their loyal service: Booster packs! So if you're thinking of heading to a Pro Tour, make sure to check out Massive Magic.