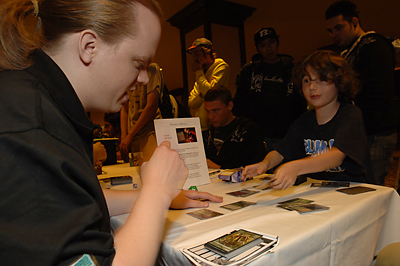 Jake Beardsley is determined to even up his game record this weekend against R&D member Ken Nagle.Ken Nagle is one of several R&D members here this weekend to battle against all comers and see the sights at the Pro Tour. As I talked to Ken earlier about the gunslinging he was doing, he told me a story about one of the games he played that really stuck out in his mind. He was playing against a pint-sized warrior brandishing a mono-white Kithkin deck. Ken was smiling as he told me how thrilled he was when the little Kithkin lord sent his team in and spent a few seconds eagerly counting out loud how big his Cenn's Heir was. Excitement like that is infectious, and it made an obvious impression on Ken.

I decided earlier that I wanted to feature a game being played in the gunslinging area, but I wanted it to be something fun. I had watched enough Standard over the weekend that covering a standard Standard match wasn't what I was looking for. So I took up a perch next to Ken and watched him run his Elf / Archer deck into all varieties of Standard concoctions. There was a decent-sized crowd huddling around the gunslinging area, all waiting for their turn to play Erik Lauer and Ken Nagle, people who literally make Magic.

"Jake!" Ken yelled over the rumble of the crowd. At first, it didn't appear that anyone was answering the call. So he called again. This time, there was a rustle of movement amidst the crowd, and a rift began to form and force its way to the front. It was like a ghost was parting the crowd. As it reached the front, I knew I was in for a treat. Emerging from the throng of people was a little kid I had seen around all weekend. He had been described to me earlier as a bigger Brett Blackman. When I saw Ken start to smile, I knew I was in the presence of greatness. Jake was my Kithkin lord.

Jake is an elfin seven-year-old (he's going to be eight this summer) from Bakersfield, CA. He and his dad Ted have spent their time here at the Pro Tour taking in the sights and slinging some magical spells. They met all the American Hall of Fame members but The Great One, and even got in a chat with Johnny Magic himself. They spent last night wandering the Public Events hall helping the judges clean up the draft leftovers and, in the process, building a pretty sizable Shadowmoor collection. Jake even used the cards to build himself a deck.

As Ken and Jake shuffled up for their game, they chatted about the games they'd played so far this weekend. 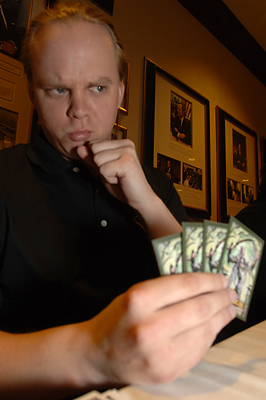 Ken summons all the gravitas he possesses. "I'm going to get even," Jake confidently informed Ken. He was currently down one game to two, but he came to play today with a plan. As he played his first-turn Swamp, it became clear that his plan was to leave the Kithkin at home and darken things up a little. On turn two, he plopped a second Swamp into play and went for the throat.

"You're going to be distressed by my Distress," he said with a smile. "I'm going to take the worst card for my deck," he said triumphantly as he stripped Ken of a Chameleon Colossus. "Besides, I have ways to kill your Swans of Bryn Argoll that don't involve damage."

"I bet you do," Ken replied with a smile.

Jake's third turn brought him a Withered Wretch, which he used to eat the Colossus for good. Ken's second-turn Boreal Druid gave him four mana on turn three, and Jake became concerned about what Ken might have drawn since the Distress.

"Ew, another Colossus?" Jake asked warily. Luckily for him, Ken didn't have the pro-black monster. But, as Jake knew, he did have a Swans of Bryn Argoll, which took flight. Jake had a Terror for the difficult to damage Swans, and attacked in with his Wretch. Ken drew his card, and used an Evolution Charm to regrow his Swans while Jake was tapped out. It would have been nice to be able to get his Colossus back, but something is better than nothing, and if he let Jake untap, his Charm wasn't going to be getting anything.

Jake cemented his new position as the Lord of the Undead rather than the Kith with a, well, Lord of the Undead. Since it was an Eighth Edition card, Jake thought it would be best to let Ken know that it was "an older version of the card, so it's actually all other Zombies." Just because he's seven doesn't mean he doesn't know his stuff.

At this point, Tim, Jake's dad, asked me if I was managing to get all of Jake's commentary into the match, which I wouldn't miss for the world. Jake's a talker, which really makes covering him a blast.

Ken replayed his Swans and sent the turn back to Jake, who simply Terrored it again on his turn. He followed that up with a Hypnotic Specter and an attack for 5. Unfortunately for the little Zombie lord, Ken found himself a Chameleon Colossus on his next turn. Jake shrugged and decided not to let the giant monster with protection from his deck faze him. He just untapped, Terrored Ken's Boreal Druid leaving him with only the Colossus, and then ate Ken's graveyard. The Hypnotic Specter swung in and managed to snag a Chameleon Colossus from Ken's hand, which got an emphatic "Yes!" from Jake. The Wretch munched that as well, and it was up to Ken to do his worst with the single unblockable Colossus. 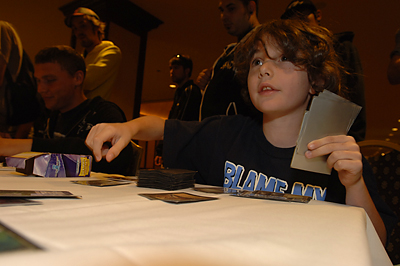 Jake, still smiling, sends in his undead minions. His worst was merely to send in and pump his Colossus, knocking Jake to 10. I'm not sure if it's the Hollywood fever, but Jake managed to channel his inner Bela Lugosi for his next play. "Sengeah Vammmmpiah." It was kinda creepy. His Wretch and Hippie swung in to drop Ken to 5. Ken dropped a Mutavault and swung in with his enlarged Chameleon Colossus, putting Jake on a scant 2 life.

Still, Ken had no way to stop the incoming flying damage, and the Hypnotic Specter and Sengeah Vammmmpiah finished Ken off. Ecstatic at having evened the score with Ken, Jake scampered off with him to collect his prize before melting back into the crush of people (Jake is the only creature in Magic with crowdwalk). Considering his youth and enthusiasm for the game, I feel confident saying that this isn't the last we've seen of the soon-to-be eight-year-old crowdwalking Ninja Zombie Lord.