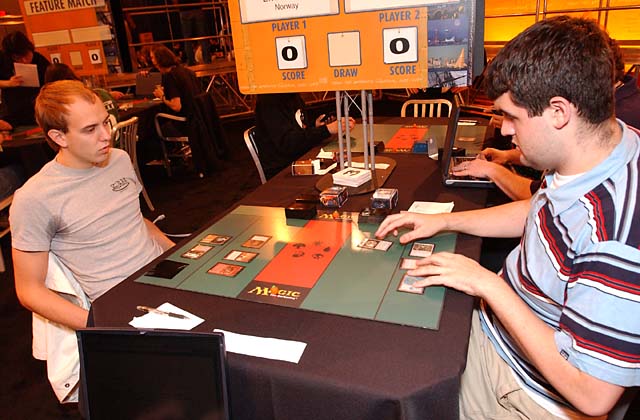 What happens when you take Mirrodin's heavy artifact theme and combine it with Urza Block's explosive mana, Tinker and Goblin Welder? Pure insanity. As always, there's a heavy buzz around the first day of the Extended Pro Tour, as everyone wants to know who has done the best job breaking the format. In this feature match between recent Pro Tour Champion William Jensen and Pro Tour Nice Champion Eivind Nitter, we saw a perfect example of just how huge Mirrodin's impact on the format is. Jensen's deck is based around the Mana Severance/Goblin Charbelcher kill combo, supported by Mystical Tutor and Tinker. Nitter's deck also has Tinker, along with a splash of red for Goblin Welder, which can bring back Mindslaver enough times to turn a regular game of Magic into Solitaire.

Nitter's deck came out swinging, as he played Ancient Tomb, Grim Monolith, and Metalworker. Shivan Reef and Goblin Welder followed, as Jensen used Brainstorm on end step. He untapped, played Chrome Mox set to blue (imprinting Force Spike), then played Talisman of Progress and a Grim Monolith. Nitter took his turn and used the Metalworker to produce six mana, played Mindslaver, and used it on Jensen. With the Welder active and able to keep bringing it back to steal plenty of turns, Jensen conceded. 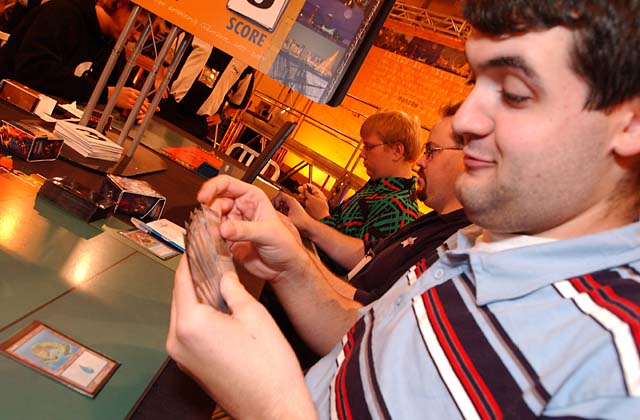 This time, it was Jensen with the fast start, opening with Ancient Tomb, Grim Monolith and Voltaic Key. Nitter summed Goblin Welder, and Jensen cast Brainstorm, looking for something to do with his mana. In the meantime, Nitter used the turn to play Metalworker, and Jensen played Tinker, getting Mindslaver. With adequate mana floating, he was able to activate it. On Nitter's turn, Jensen was in control and had a hand of Grim Monolith, Thirst of Knowledge, Great Furnace, Masticore, Chromatic Sphere and Goblin Welder to work with. Jensen played out all of Nitter's permanents, causing the European to comment, "It's not looking back for me!" Before the turn was over, Jensen used Nitter's Welder to trade his Voltaic Key for the Mindslaver. It was activated once again, and Jensen chose to discard Thirst of Knowledge to the Masticore. Goblin Welder traded Jensen's Chrome Mox for Mindslaver, and Chromatic Sphere was cracked, drawing into Citanul Flute. Masticore shot down a Welder, leaving Nitter with one left. 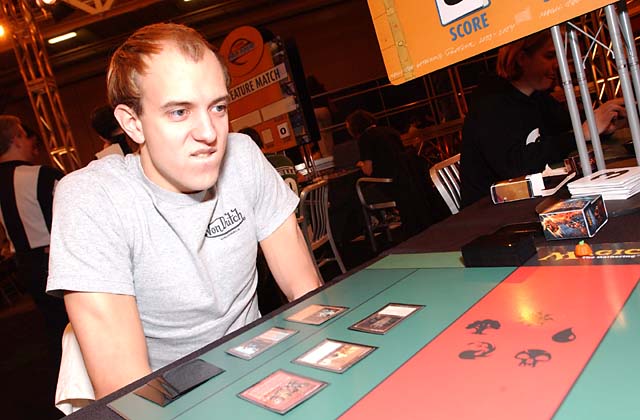 On Nitter's next turn of being a spectator, Jensen let the Masticore and Welder die. On end step, he cast Mystical Tutor to get Mana Severance, which took all the lands out of his deck. Luckily for Nitter, he now got to control his own turns. He cast Tinker to get Bosh, Iron Golem, and yet another Tinker on the following turn to get Gilded Lotus. Rack and Ruin took out Jensen's Grim Monolith along with Nitter's artifact land. Just when Jensen seemed to be a turn away from losing to a Bosh attack and "chuck", he cast Mystical Tutor to get Rushing River, bouncing Nitter's Gilded Lotus and Bosh, which annihilated his board position. With only two lands and no threats out, Nitter had to essentially start from scratch, although he drew into Metalworker to help things along. Jensen used Tinker to get Goblin Charbelcher, with was representing a lethal activation thanks to Mana Severance. Nitter handled the problem by attacking with the Metalworker to bring Jensen to two life, where he couldn't use his Ancient Tomb to activate the Charbelcher, and was short one mana to do it otherwise. Nitter's next attack brought Jensen to one, and he cast Brainstorm, looking for the one mana source he needed to activate the Charbelcher. It wasn't there, and he conceded.