John" Taro Kageyama, captain of the Japanese team appropriately named "Team John," was wearing his team T-shirt as he sat down to play Hiroki Yamazaki who was playing in his first DCI tournament. John recently finished in the Top 8 at Grand Prix Sapporo and was playing a Green/Blue Survival deck with counterspells and splashing the big Nabob himself - Squee. Yamazaki was playing the multi-color Replenish deck using Pandemonium and Saproling Burst for the kill. 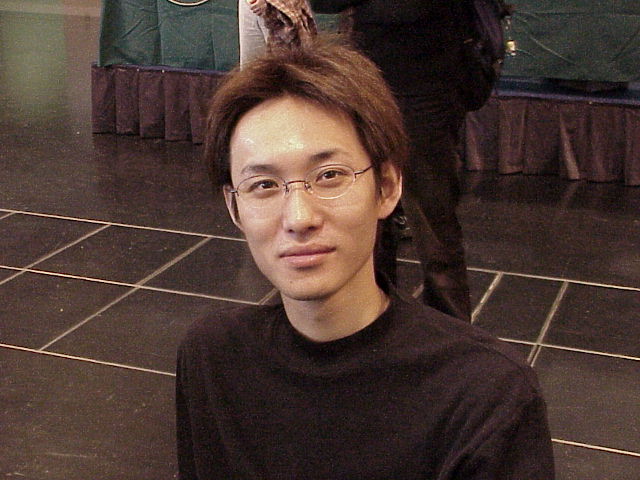 After a hard fought battle of Rock, Paper, Scissors, John's scissors defeated Yamazaki's paper and he chose to play first. After counting each other's sideboards, they each drew their seven starting cards. John wasn't happy with his initial selection and chose to mulligan into five green cards and an Island. At first look that appeared to be a hand that should be mulliganed again, but one of those green cards was Land Grant so he chose to keep it. Yamazaki also chose to mulligan and displayed no emotion as he kept his six card hand.

John opened with his one Island and tried to follow it up turn two by paying the alternate casting cost on Land Grant. After looking at John's hand and seeing that it was all green cards, Yamazaki wisely chose to Force of Will the Land Grant. This proved very effective as it wasn't until turn four that John was able to play a second land and cast a Birds of Paradise. Yamazaki laid his fourth land and cast Pandemonium, leaving him one Saproling Burst away from winning the game.

John tried to get some momentum by casting Quirion Ranger and using it's ability with the Birds of Paradise to get out another green creature, but it all seemed pretty futile after Yamazaki dropped Saproling Burst on turn five for the combo. Unfortunately for Yamazaki, John had just played a Spike Feeder that he could gain life from so he would survive the 21 points of damage that the Burst/Pandemonium combo could generate. Instead Yamazaki destroyed the Ranger and Bird to set John's mana base back a couple of turns. 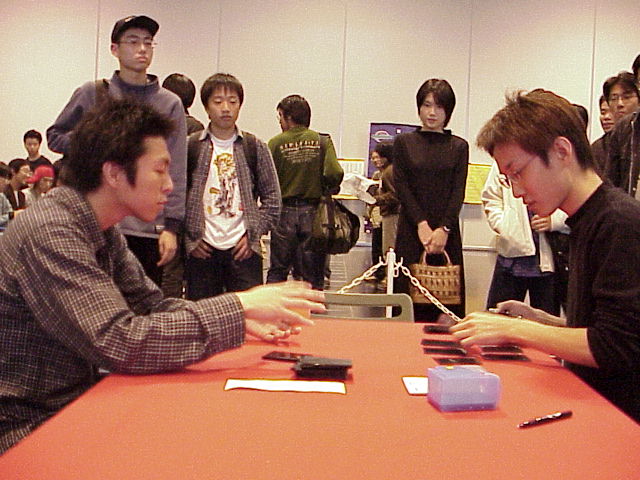 John attempted to come back using an Uktabi Orangutan non-conventionally to kill a Saproling token (with Pandemonium's come into play effect) and looked like he might win just through attacking with creatures as Yamazaki had taken a lot of damage from pain lands. But a couple of turns later Yamazaki finally got a Replenish using Frantic Search and Intuition and Replenished back the Burst to win the game.

The second game started badly for John again as he was forced to mulligan a no-land hand. His second hand was much better and he opened with a Quirion Ranger followed by a Merfolk Looter. Yamazaki answered back by using his Ancient Tomb and Tropical Island to Frantic Search the combo cards (Saproling Burst and Pandemonium) into the graveyard on turn two!

John realized that if Yamazaki had a Replenish and a land he will probably go off on turn three so he needed to find a quick answer. He attacked with both the Ranger and the Looter, and then used the Ranger's ability to untap the Looter to search for an answer. He got what he needed, tapped two lands and dropped Back to Basics!

But John had another answer and discarded a blue card of his own to Force of Will Yamazaki's Force of Will and not only did he now have Back to Basics in play, his opponent's lands were all tapped out! Things looked pretty good for John.

But, in a demonstration of the robustness of the Replenish deck, Yamazaki just played two lands and a City of Traitors to cast Replenish on turn five. Again, it looked like he's won but John just discards a blue card and Force of Wills it. Again, it looked like John had everything in hand with his opponent having no available mana sources and John with lots of creatures, but Yamazki coolly discards yet *another* blue card to Force of Will John's Force of Will and John concedes the game.

Afterwards John explained that while the matchup isn't good for his deck, he felt that he was severely handicapped by the two mulligans. The first game could easily have gone his way if he had been able to start casting spells before turn four but unlike many North American Magic players, John didn't get all worked up about his mana problems and was very sportsmanlike after the match.