Feature Match Round 1: Sitting Down for a Feast

Nestled in the heart of Paris, under the dusky lights of Café Noir, Magic Weekend Paris was getting underway. Patrons lined the block as the regular customers took their seats, eager to get things started. The main course, Pro Tour Paris, features a full, three-day course of action, adventure, and atmosphere. Standard, really. 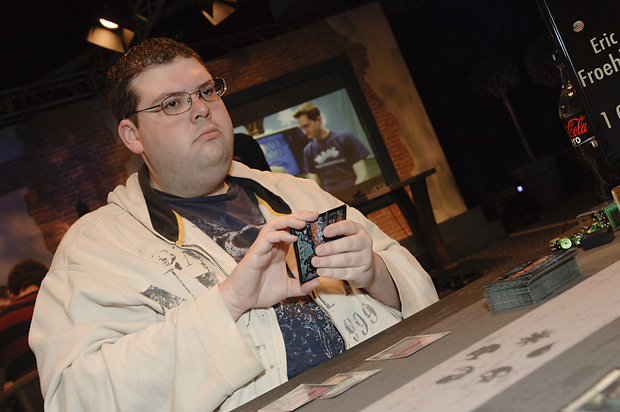 Eric Froehlich looks to be rocking some classic white-bordered Islands there.

Right now, though, sitting at the seat of honor, were a couple of Café Noir regulars: Eric Froehlich and Katsuhiro Mori. Froehlich, who has made a pretty nice living letting his cards do the talking, came off a pretty good year last year, finishing strongly all year, including Top 8s at Grand Prix-Toronto and the World Championships. His opponent, Katsuhiro Mori, is a well known Japanese Pro, as he should be. He had a great last year himself, adding another Grand Prix and Nationals win to his already incredibly impressive resume, which features sixteen Grand Prix and Pro Tour Top 8s, including four Grand Prix wins (including Yokohama last year), two-time Japanese Nation Champion, and a stint as the 2005 World Champion! His impressive resume didn’t save him needing a mulligan, and he was forced to go to six cards for the first game of this powerhouse match.

Froehlich began with a Seachrome Coast, which allowed him a first-turn Preordain. Mori met him with an Inkmoth Nexus. A Stoneforge Mystic on the following turn got Froehlich a Sword of Feast or Famine, the newest addition to the dual-color armory. Mori simply made another Nexus and an Island over his next couple of turns. Not wanting to walk into countermagic, Froehlich chose not to cast his Sword when Mori showed him

on his second turn, opting instead to wait until the end of his turn before activating the Mystic and putting his Sword directly onto the battlefield. He then untapped and equipped it, sending his freshly armed Mystic across at Mori. After merely a second or two of thought, Mori packed the game in. 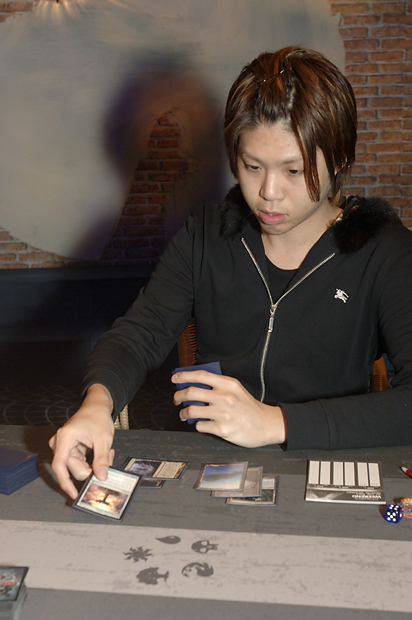 Katsuhiro Mori goes with the flow.

For the second game, Froehlich started with a mulligan, but it would be Mori who would be starting the game first. A Drowned Catacomb hit play first, followed by a few more lands, including an Inkmoth Nexus. Both players were content to simply play lands over the first few turns, the most notable for Froehlich being a Tectonic Edge, which would be able to take care of at least one of the animatable lands on Mori’s side, should things become dire.

Mori was the first to break the stall, getting himself an Everflowing Chalice for one. Froehlich followed by digging a little himself with a Preordain. The first real spell of the match hit the table on the following turn. Mori attempted a Jace Beleren, but Froehlich had other plans. He used a Mana Leak to force Mori to tap out before finishing the planeswalker with a Spell Pierce. Into the void, and with Mori unable to answer, Froehlich added Gideon Jura, resolving the first planeswalker of the match. Mori, determined to even the score, brought in Jace, the Mind Sculptor on his turn. He immediately used it to Brainstorm.

Froehlich sent Gideon to attack Jace, quickly ending his fellow planeswalker’s life. The Tectonic Edge that had been sitting in play since the first turn took care of the Inkmoth Nexus as well. On Mori’s turn, he attempted to get himself back into things with a Sword of Feast or Famine, but Froehlich had a pair of Divine Offerings to get rid of it through a Mana Leak. He then cast his own Sword of Feast or Famine, equipping Gideon before attacking. All Mori could do was send his Creeping Tar Pit back through the opening, taking Gideon to five loyalty. 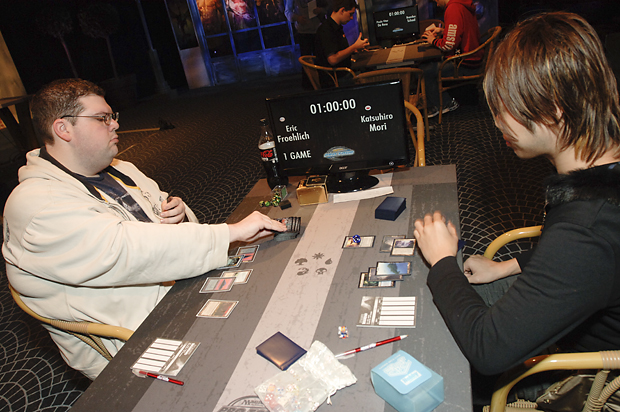 Top players like Froehlich and Mori seem to savor the subtle intensity of a control mirror.

Froehlich cast a Jace, the Mind Sculptor of his own before equipping his Gideon with the Sword and attacking. With renewed access to his mana, he played a Squadron Hawk, getting the nod for Mori. Before he could do more than reach for his deck, though, Mori reevaluated his situation and saved him the effort by conceding the match.