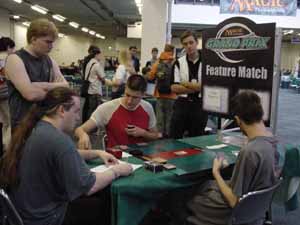 Jelger won the toss and both players kept their opening hands. Benjamin made the first play, a Silver Knight on his second turn but Jelger followed up quickly with a morph to balance the board.

Both players sat behind their creatures for a few turns, playing land and cycling, digging for good spells. Benjamin found one first, a morph, but didn’t have the mana needed to counter a Slide from Jelger on the next turn. Benjamin did nothing in his turn and Jelger used his spare mana to unmoprh his angel before returning a Dragon to his hand. 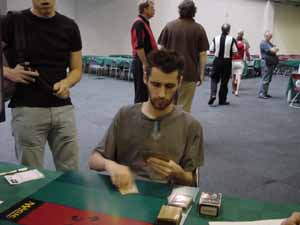 Again, the players sat back drawing and playing land before Benjamin made his move: he cast Akroma’s Vengenance to try and clear the board. Jelger cycled a card to Slide out his Angel and the Vengeance happened. Jelger untapped and cycled a Decree of Annihilation, intending to blow up the world if Benjamin had no Stifle. He didn’t and Jelger floated three mana before destroying all the land, played a Grand Coliseum and cast a morph before attacking for four.

Two turns later, still with no land in play Benjamin conceded the game.

The second game started off all Benjamin’s way, as Jelger was a little light on land. Benjamin got an Angel and a Knight into play and took Jelger down to six life before Jelger could cast Akroma’s Vengeance. Benjamin used a Chain of Vapor to return both his Angel and his Knight but Jelger had stolen the initiative, dropping an Eternal Dragon and a Rift. A turn later Jelger cast a second Dragon, putting pressure on the Frenchman. 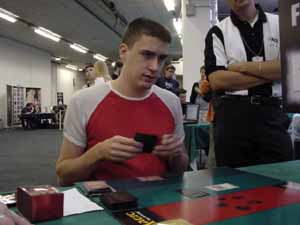 Benjamin couldn’t do very much – he just wasn’t drawing the spells he needed – but did stop the terminal Decree of Annihilation with a Stifle, leaving Jelger to play a second Rift. Even with the life gain from his own Angel, without clearing the board Benjamin would have a tough time and with two Rifts, two Dragons and Angel of his own and three cyling cards Jelger finished him off to take the win.