This match featured Matias Bollati, ranked fifteenth in Argentinean Constructed with his Tradewind-Survival against Rafael Le Saux one of the best players in Latin America with his CounterSliver deck.

They rolled the die to decide who would start and Bollati won. They both took a mulligan. 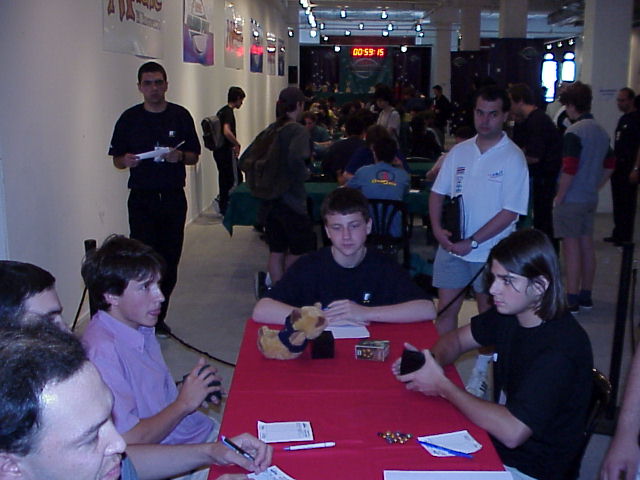 Bollati started slowly playing some lands, but Le Saux make it hard for him starting with a Duress (taking a Survival of the Fittest) and then casting an Acidic Sliver. They both started to accumulate some lands but meanwhile, Rafael was still hitting with his Acidic until he decided to start the action. He tried to cast a Crystalline Sliver but Matias played a Counterspell on it. Then he played a Muscle Sliver and started with the real beatdown. Bollati tried to recuperate from this by casting first a Quirion Ranger, and then a Tradewind Rider, which was countered by a Force of Will. Rafael played another Crystalline and continued attacking Matias. Bollati played some Birds of Paradise and a Tradewind Rider but he could do nothing with all those nasty slivers hitting him. He conceded.

In this game, Bollati decided to start fast with a first turn Birds of Paradise and a second turn Wall of Roots but then, Rafael played a Duress discarding a Back to Basics. Le Saux played a Crystalline Sliver. Bollati played a Tradewind Rider so Rafael decided to play a Demonic Consultation naming Pyroblast. Luckly for him, it appeared on the seventh card and destroyed the Tradewind. Then he played a Hibernation Sliver, a Seal of Cleansing and made the first attack of the game. Matias played a Survival wich was destroyed by the Seal, and then Rafael started to cast two more Crystallines making it impossible to do anything about them, ensuring the win.