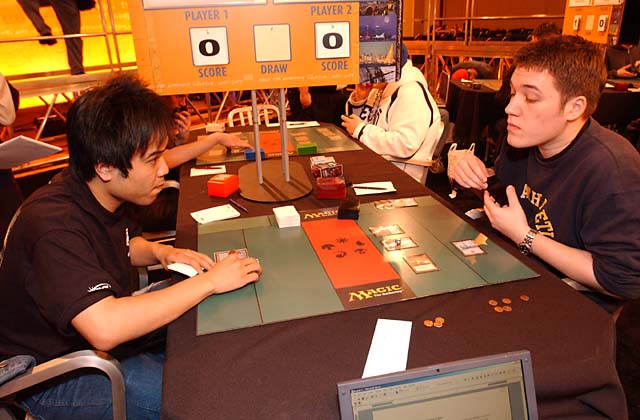 Kai Budde needs no introduction. He's largely considered to be the best Magic player of all time and he has the finishes and money winnings to back it up. Osamu Fujita isn't quite as well known, but he's running one of the most talked about decks of the tournament: Mind's Desire powered by Twiddle. Kai is running the German version of Tinker.

Kai didn't seem to feel confident about his chances against this Japanese concoction. "This doesn't look good for me. I feel like I'm getting goldfished."

Good luck was exchanged, and the players began.

Osamu drew a hand with Seat of the Synod, Meditate, Gilded Lotus, Tinker, Dream's Grip, Mystical Tutor, Tendrils of Agony and lapsed deep into thought. In the end, he had to send it back for a new six: Sarpazzan Skerry, Chrome Mox, Gilded Lotus, Twiddle, Dream's Grip, and Mind's Desire. He kept. Kai also mulliganed, and also liked his next six. 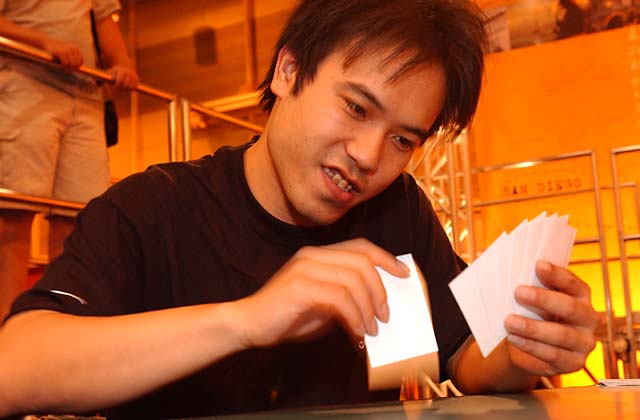 Osamu led with the Skerry and passed the turn. Kai had City of Traitors, Grim Monolith, Metalworker, which is certainly one of the better Tinker starts. Osamu still hadn't drawn a second land and had to pass the turn back. On his turn Kai tapped his City, played an Island, tapped that and Tinkered away Grim Monolith for a quick Clockwork Dragon. He then used his Metalworker to power out a Thran Dynamo.

On his third turn Osamu played Chrome Mox, imprinted Twiddle, and placed down the City of Traitors he had just drawn to power out a Gilded Lotus. The Lotus was tapped for blue mana three times (aided by two Dream's Grips), leading into a Mind's Desire for five floating one blue mana. It turned up the following cards: Ancient Tomb, Sarpazzan Skerry, Chrome Mox, Meditate, Diminishing Returns. The last one was cast first, so Osamu removed ten cards (including all three of his remaining Mind's Desires) and they shuffled up then drew new hands of seven.

He untapped the Lotus with Dream's Grip and lapsed into thought. Meditate was cast for free, then Gilded Lotus turned sideways three more times, this time due to two Bursts of Energy. Brainstorm found another Twiddle but no business spells, so the Gilded Lotus was Tinkered away for a fresh one (thereby shuffling the library). That was tapped for blue and untapped with Dream's Grip, and then Trade Secrets was cast for four more cards. "Repeat?" Osamu jokingly asked.

Osamu Brainstormed, still looking for a Tendrils of Agony. "I guess he fizzled, I don't know," said Kai to Rich Hoaen at a nearby table. Osamu couldn't believe his terrible luck as he looked for a way out of the predicament, but none was forthcoming. He had to enter his discard step and pass the turn back to Kai, with another turn coming after that due to the earlier Meditate.

Clockwork Dragon entered the red zone for a quick seven damage. Metalworker tapped to produce fourteen mana, which was used to pay for Gilded Lotus, a Thran Dynamo, and a Stroke of Genius for nine cards. This was followed by Voltaic Key, which untapped the Metalworker for another fourteen mana, then Grim Monolith and a Tinker for Mindslaver. Shortly after Mindslaver was activated, and Osamu was convinced to scoop.

Osamu kept a hand without blue mana and played a first turn Ancient Tomb. Kai repeated his first turn from last game with Grim Monolith and Metalworker. "I am very good," Kai deadpanned in his German accent. This was especially true because his hand was capable of Tinkering up and using Mindslaver on turn two.

Osamu played a turn two Chrome Mox, imprinting Thirst for Knowledge, and Tinkered it away for a Gilded Lotus, and we were off to the races again. Twiddle and Dream's Grip untapped the Lotus twice for seven blue mana, leading into a Mind's Desire for five revealing: Brainstorm, Tinker, City of Traitors, Ancient Tomb, and Tendrils of Agony. Brainstorm was cast first, and then Tinker grabbed a fresh Gilded Lotus. City of Traitors was played and then tapped along with the Lotus for a new Mind's Desire. Eight free cards was too much with a Tendrils already showing, so Kai packed it in.

Even the most proactive Tinker draw isn't fast enough to stop this deck. 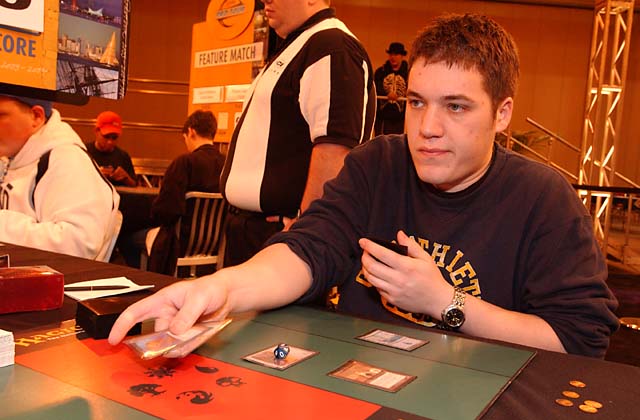 This time, though, Tinker was playing first. Kai kept his hand, which included a very important Annul, while Osamu kept a hand of Sarpazzan Skerry, City of Traitors, two Twiddles, two Mind's Desires, and Grim Monolith.

Kai led off with Island, waiting on the Annul sitting in his hand. Osamu played out a Skerry and passed the turn.

Kai's second turn ended with Grim Monolith, Voltaic Key, and an untapped Gilded Lotus on his side of the board. Osamu drew and thought for a good while about the proper play. City came down, then Skerry was tapped for two blue, and untapped with Twiddle, then the City of Traitors was tapped to pay for a Grim Monolith. Kai tapped Gilded Lotus and Annuled. Osamu, looking dejecting, used his floating blue mana to cast Brainstorm, and then was done.

Twiddling the Sarpazzan Skerry before attempting to cast the Grim Monolith was almost certainly a mistake, but Kai did such a good job of acting disinterested that Osamu didn't seem to be thinking about the possibility of countermagic.

Kai began his turn with another Voltaic Key, then a Metalworker, and his last card in hand, a Rishadan Port. He tapped down the City of Traitors on Osamu's upkeep, sitting with a lot of mana but little action. Osamu played Seat of the Synod, sacrificing his City, and passed the turn back. Metalworker got in for some beatdown and Skerry was tapped. Osamu played another Seat off the top. Kai attacked with Metalworker and played a second one.

Kai tapped a Seat on Osamu's upkeep and Osamu shipped the turn back. Kai drew, looked frustrated, and sent with both Metalworkers to take the score to 18 to 16. A third Metalworker hit the table to laughs from the spectators.

Osamu carefully placed down an Ancient Tomb and sat back to think. Next was Chrome Mox, imprinted with Diminishing Returns. Dream's Grip untapped Ancient Tomb and Twiddle untapped a Seat of the Synod. Could Osamu make the deck work without a Gilded Lotus? Mind's Desire resolved for four, showing Gilded Lotus, Burst of Energy, Twiddle and Seat of the Synod. Gilded Lotus was placed onto the stack, but the only card in Kai's hand again turned out to be a key Annul.

Osamu only had one card in hand, but he thought carefully before sending the turn back. The team of Metalworkers swung for three. Osamu drew and had no action. On his next turn, it was evident in Kai's face that he had drawn something good. Mindslaver was quickly cast and activated along with the usual Metalworker attack. On Osamu's turn, Kai tapped the City of Traitors, cast Tinker sacrificing the imprinted Chrome Mox for a useless one, then cast the Chrome Mox in Osamu's hand and imprinted the last card in his hand, Mind's Desire, on to it.

After that, the rest of the game was simply a formality. Kai survived a rough game one to take the match from the Twiddle deck.