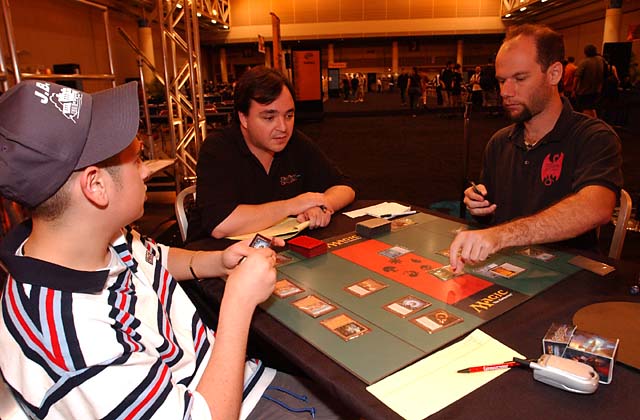 his parting of the ways with CMU-TOGIT earlier this year, there were some rumors that put Jordan Berkowitz on wearing the red and black dragon for YMG. Love him or hate him, there is no denying that Jordan is one of the hottest young players on the tour. After his Top 8 performance at Pro Tour Venice he made the Top 8 a US Nationals and just missed the final cut at this past World Championships with a heartbreaking 10th place finish.

Jordan was expecting to hook up with YMG and was disappointed to find himself without a major team for this Pro Tour. He hooked up with a handful of other young players and retreated to Canada for playtesting. When Jordan made the Top 8 of Venice he did it with a deck designed by relatively unknown Pennsylvania based player Gregg Weiss. When Jordan was greeted in Canada by Rich Hoaen, Mark Zajdner, and Joshua Wagener he came bearing another Gregg Weiss creation-Mono-Brown.

Only half of the team was playing the deck and the other player-Mark Zajdner-failed to make day two. Jordan was still a Top 8 candidate at 7-3-1 as was his opponent Dave Humpherys. Dave was running the infamous Scepter-Oath deck. The deck is extremely vulnerable to a Chalice of the Void set to two. It was "The Hump" who made the sideboard addition of Illusion/Reality that gets them out of that trap-although that is his only real out. 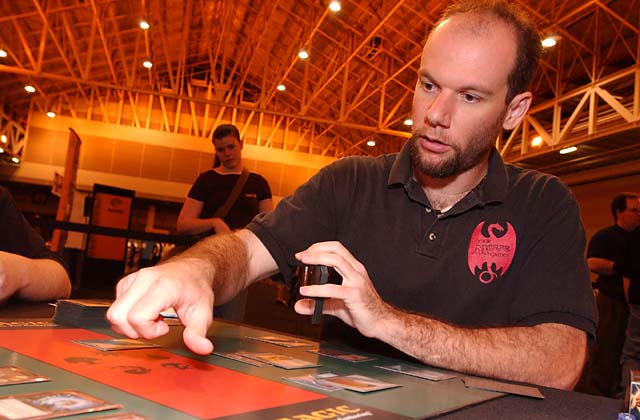 Theoretically, both players are aware of the others decklists but Jordan has not paid enough attention to the YMG list and when Dave played a Chrome Mox and imprinted a Moment's Peace he had to laugh, "This deck is crazy. You YMG guys have the craziest stuff!"

Jordan had led off the game with a Rishadan Port and a Voltaic Key had another Port for his next turn and tapped Dave's Island on his upkeep. Dave played a Wooded Foothills and imprinted a Counterspell on a Scepter.

Jordan scrunched up his face and weighed his options. "That seems good… I have to ask the judge a question." When he came back from his confab with the judge he used an Ancient Tomb to cast Sphere of Resistance. Now Dave needed to converse with a judge, "I assume I have to pay more for this?" he asked gesturing toward his Scepter.

Jordan continued to Port Dave on his upkeep and Dave passed the turn with only a Yavimaya Coast to show for it. Jordan promptly played and used a Wasteland on the Coast and seemed surprised when Dave did not float any mana. "I wish I had gotten a better look a that decklist. I can't remember anything…I know you had Fire/Ice…"

On his own turn, Jordan used his first Port to tap a blue source and Dave floated his mana. Jordan went for the other blue source and it was tapped for mana as well. When Jordan announced his attack step to clear Dave's mana pool, The Hump cast Cunning Wish for Naturalize. With the Scepter out of the way for the turn, Jordan revealed Sculpting Steel, Tangle Wire and another Metalworker to make eight mana with the help of his Key and play Tanglewire and another Metalworker.

Dave Naturalized the Sphere while the Tanglewire was on the stack and passed the turn completely tapped out. Jordan made eighteen mana with his two Metalworkers and the Voltaic Key. He had not revealed another Sphere in his hand the previous turn and he had drawn a Myr Incubator on his next turn. He played the Incubator, Sculpting Steel-copying the Tanglewire-and activated the Incubator. As he went to remove artifacts Dave conceded in the interest of time, "Since I already know your decklist I am just going to scoop now."

Jordan was clearly frustrated with himself for not being as prepared as Dave. "I wish I knew yours… That's all right. Who needs a decklist-who needs them? Raw talent at work, right here!" 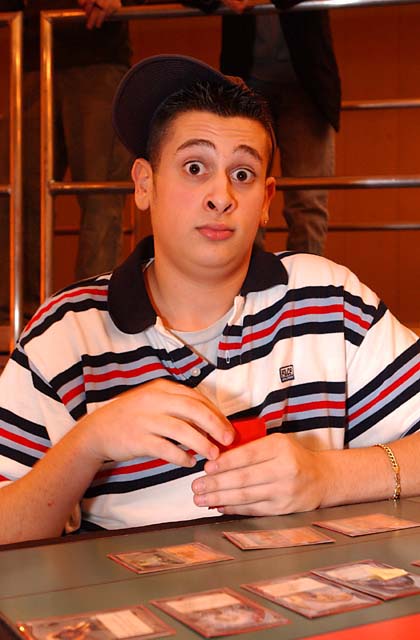 Dave sided outmost of his creature control for Dust Bowls and Naturalizes. He left in some Oaths and all but one of his Moment's Peace. Meanwhile, Jordan brought in four Smokestacks and Mindslavers.

While they shuffled Jordan talked about wanting to join YMG. "Justin told me they wanted me and I got pretty excited. I know a couple of guys didn't vote for me and it didn't happen. But then like you guys took ten other guys!"

Dave shrugged, "I was for you…"

"Really? I figured you as one of the guys that didn't want me on the team."

"I thought you would have been a good choice."

Dave opened with a Yavimaya Coast and once again Jordan's unfamiliarity with the decklists gave him pause. "I don't know if you have Annul… I'll just pretend you don't know my decklist either."

Jordan played an Ancient Tomb and took two to cast a Grim Monolith. When it resolved Jordan cast a Metalworker and suddenly feared he had fallen into a trap. "Are you trying to sucker me? Did you see the Metalworker in my hand? If he Annuled or Force Spiked it that would be masterful." It was all fruitless speculation-all Dave could do was Brainstorm.

Dave did dig up a Naturalize and smoked the Metalworker on his next turn. Jordan played a City of Traitors and took another two from the Tomb to play a Thran Dynamo and a Tanglewire. Dave tapped out from the Wire and played a Chrome Mox and a Treetop Village.

Jordan left his Dynamo up and lost his City when he played a Crystal Vein. He shipped the turn back to Dave who Fact or Fictioned on his upkeep. He revealed an Oath, Dust Bowl, Counterspell, Mountain and Fire/Ice. Jordan bugged his eyes at the Dustbowl and complained, "That's bull, my entire deck is non-basic." Dave took a pile with the two lands and an Oath. Jordan was confused, "Oath? What is that still doing there?"

Dave looked over at the Metalworker in the bin and shrugged, "It would have been pretty good on turn two."

Now it was Jordan's turn to shrug. I would trade you an active Oath for a chance to untap with Metalworker in play." Dave played the Bowl and passed it back.

Jordan tapped his Tanglewire and his Crystal Vein during his upkeep and had the Wasteland for the Dustbowl. He had untapped his Monolith at the end of Dave's turn and was able to cast Myr Incubator. He then tapped his Tomb to play his Sphere of Resistance. "I am all in on this Incubator. I won't lie, that Naturalize hurt quite a bit. This would have all been out on turn two," confessed Berkowitz.

You could see Dave's mind as he ran over the possibilities and he Cunning Wished with Wire on the stack for a Moment's Peace. If he could get the Oath into play and buy one or two turns with the Peace he would be able to get a dangerously large Cognivore into play. Jordan could sense he was not as in control of the game as he would like, "I'm getting kind of worried."

He passed the turn back to Dave and waited to activate his artifact. The Wire was down to one counter and Dave tapped his Chrome Mox, played a Mountain and said go. Jordan was wary but still removed all of his Metalworkers, Mindslavers, Grim Monoliths, Smokestacks, Spheres, Keys, and Dynamos from his deck to make twenty-one Myr tokens.

Dave cast Moment's Peace when Jordan attacked. He would have enough mana on his next turn to cast Oath and flashback Moment's Peace but Jordan had another Tanglewire and another Sphere. "I basically needed you to have neither of those."