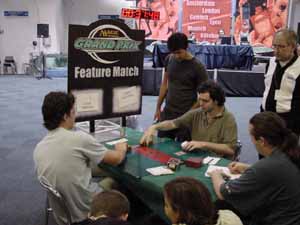 Jose Barbero and Diego Ostrovich are amongst the best that South America has to offer, both from Argentina, Barbero is the current National Champion and both have had a good year, but Ostrovivch hasn’t done as well as his Worlds performance a year ago. Both players are playing Goblins so it promises to be a short match whoever wins.

Jose took his turn in the driving seat with a Warchief of his own, but Diego had his own Shock. Jose cast a Clickslither next turn and swung in, taking Diego to a massive 17. Diego drew but could only add a Warchief to his side of the table and attack for two. Jose was drawing better, played a commander and attacked with his Clickslither, sacrificing all his tokens to knock Diego down to eight. 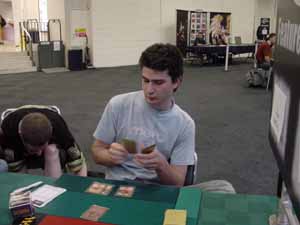 Diego found a Commander of his own, but had to tap out to play it and pass, and Jose had a second Commander and a Sledder to pump his Clickslither for the win.

Jose started casting spells first with a turn two Piledriver, but Diego cast a turn three Warchief and got first blood. Jose had a Gempalm Incinerator to kill the Warchief, attacked for one and added a Goblin Sledder to his team.

Next turn things started looking up for Diego with a second Warchief and a Goblin Prospector both played and sent in to attack. Jose had a good come back: A Goblin Sharpshooter. Keeping the pressure up, Diego added a Goblin Goon to his side and attacked again, knocking Jose to 12 but Jose’s turn was better, shooting the Prospector and Warchief, sacrificing the Sledder and shooting the Warchief again. 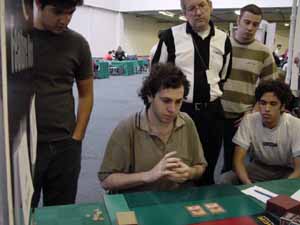 Diego cast Starstorm, leaving him with the only creature and attacked with his Goon, dropping Jose to a fragile six life. Jose found a Clickslither but Diego came right back with a Siege Gange Commander, swung with the Goon and Jose conceded the game.

Before game three both players looked at their sideboards again and Jose returned his deck to it’s original configuration. “It’s much better when you’re going first.”

It was much better. He came out of the blocks flying with a turn two Piledriver, turn three Chief and turn four Clickslither. Diego made a Chief of his own, but it was forced to chump and , although Diego found and cast a Clickslither, Jose had a Gempalm Incinerator and three Goblins in play to take care of it and take the game.