Canada's own Hunk-O-Rama Ryan Fuller was matched up with Japan's quite handsome Kotaro Ando. It was a tough match since they were both playing Tradewind Survival decks. 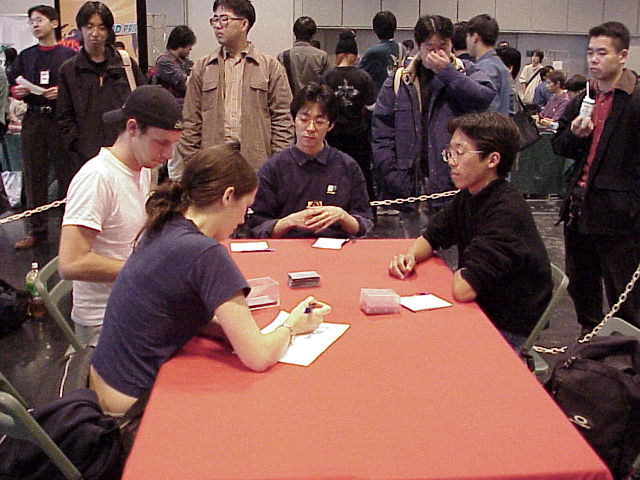 Ryan started game one with some tough choices. Having Duress, Birds of Paradise and Quirion Ranger in hand he decided to play Birds of Paradise turn one. This turned out to be a mistake for on Ando's turn he played Land Grant. If Fuller had Duressed he could have taken the Land Grant possibly ending this game a lot sooner. Turn two Ryan played Wall of Roots, Quirion Ranger and Duressed Ando taking an Annul. Ando started off his turn two mirroring Ryan on the table with Wall of Roots and Quirion Ranger. He then outdid Ryan with a further two Birds of Paradise to which Ryan shook his head and muttered "would you look at this guy go." Ryan played opposition and it was then Ando's turn. Turn three Ando topdecked a Survival of the Fittest, to which Ryan replied "good job" and gave a thumbs-up sign. Ando discarded Deranged Hermit for Squee. Ryan played Tradewind Riders and Ando discarded Squee for Squee. Fuller was nervous because if Ando had had a Gilded Drake he could have taken the Tradewind and locked Ryan down.

During Ando's turn four there was a bit of a miscommunication. Ando untapped and said, "upkeep" and looked at Ryan. Ryan using the Opposition tapped his three Birds of Paradise and his only land. Ando then tried to return Squee to his hand. Ryan said, "No, it has to be at the start of the upkeep." Ando said that Ryan played too fast and that he didn't have a chance to put Squee on the stack. The head judge and an interpreter were called over and the ruling was to go back to the beginning of the upkeep. Ando had two Squee in hand and discarded one for Wall of Roots and the other for Birds of Paradise. He then played Masticore. Ryan now confident claimed "I'm going to win this". He used Tradewind Rider's ability with the Wall of Roots and Quirion Ranger to bounce Masticore. In response Ando used Masticore to kill the Quirion Ranger. In response to that Ryan bounced his Quirion Ranger. Ando discarded Squee for a Wall of Roots and then continued to play two Wall of Roots and a Birds of Paradise. Ryan played Deranged Hermit and having the extra creatures, he was able to lock Ando down with a combination of Opposition and Tradewind Riders. Ando conceded and they went on to game two. 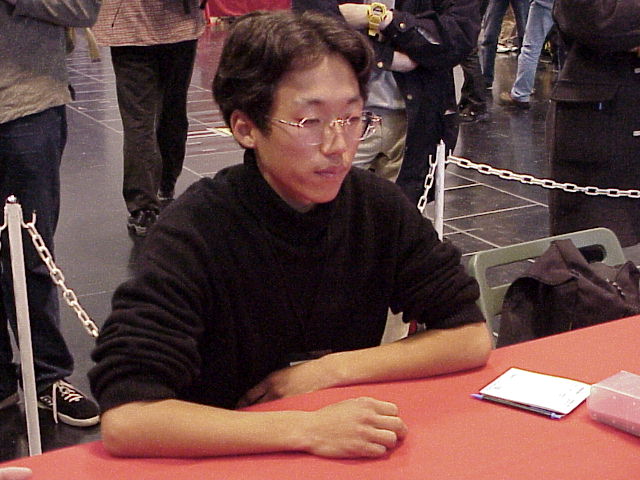 Ando started with a turn two Merfolk Looter. Fuller played a turn two Survival of the Fittest that Ando Force of Willed. Ryan was able to get another Survival of the Fittest after having Vampiric Tutored for it. Ando discarded Squee for Tradewind Riders and played it successfully. Ryan then discarded Squee for Gilded Drake, he then Duressed Ando and took a Force of Will. Having seen his hand he successfully cast Gilded Drake and took Ando's Tradewind Riders. With the Gilded Drake/Tradewind Riders combo he had Ando locked down. Ando had no way out of the combo and conceded.