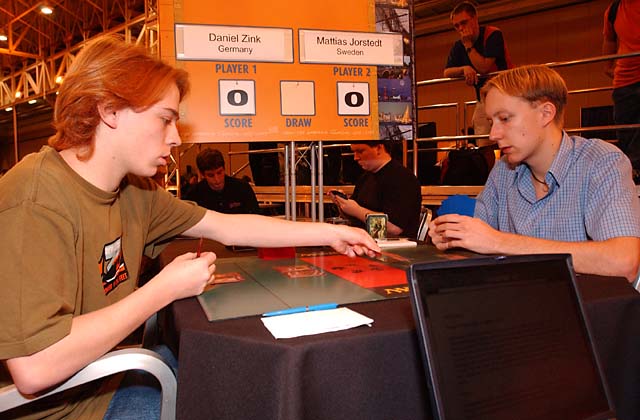 season, both of these players made huge waves. Jorstedt made two Top 8's, and followed that up by winning Pro Tour Yokohama. Interestingly enough, the Swede's success up until his Pro Tour victory was somewhat quiet, as most casual followers of the Pro Tour were not terribly familiar with him. After his great year, however, everyone knows him as one of the best players around. Daniel Zink is the current Magic World Champion, after winning the biggest tournament of the year in his home country of Germany back in August. It'll be interesting to see how he follows up that finish here in New Orleans, the first individual Pro Tour of the season. He's playing Gob-Vantage, while Jorstedt is running blue/red Tinker. 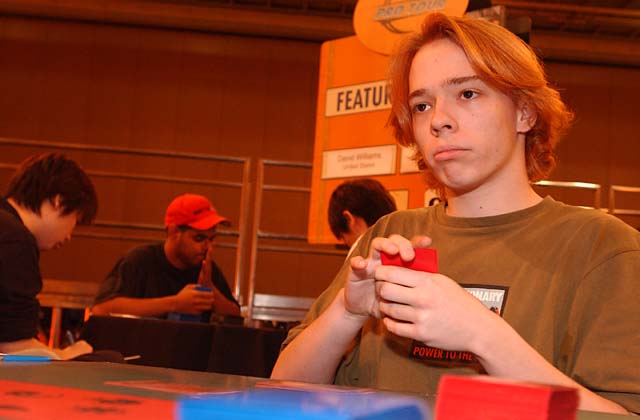 Jorstedt mulliganed his opening hand, and had a Goblin Welder to match Zink's Skirk Prospector. Goblin Recruiter followed, stacking the deck with plenty of creatures. Grim Monlith gave Jorstedt some mana acceleration, but he had nothing to play beyond that on turn two. A cycled Gempalm Incinerator killed the Welder, and Zink's Goblins attacked for two damage before being joined by a Mogg Fanatic. Jorstedt untapped, played two more Monoliths, and cast Tinker with enough mana floating to activate the Mindslaver he searched out. On end step, Zink threw the Mogg Fanatic at Jorstedt, and sacrificed the Prospector for a point of mana burn. If it had stuck around when Jorstedt took control, it would have slaughtered the whole team. Instead, Jorstedt simply saw a hand of Ancient Tomb, Goblin Charbelcher, Goblin Piledriver and Goblin Warchief. The 'Belcher represented a lethal activation, but Jorstedt at least had a few turns to deal with it. He played the Ancient Tomb, and had it tap to deal two damage to Zink. Afterwards, he took his own turn and played a Goblin Welder. Now, Zink was in a worse position. If he played the Charbelcher, Jorstedt would Welder back a Mindslaver, and aim the big cannon at its owner. Zink had outs, however, and played Goblin Ringleader to get four more Goblins, one of which was an Incinerator. With the help of Skirk Prospector, it handled the Welder problem.

Things weren't looking good for Jorstedt, but he still had one more obstacle for Zink to deal with- he Tinkered up Platinum Angel. Zink played another Recruiter to reset his deck, along with Goblin Warchief. The Recruiter was then sacrificed to the Prospector, putting out a Piledriver. Jorstedt cast Thirst for Knowledge, and attacked with the Angel to bring Zink to eight. Three Piledrivers provided Zink with plenty of damage in combat, and an Incinerator was cycled to get the Angel out of the way. 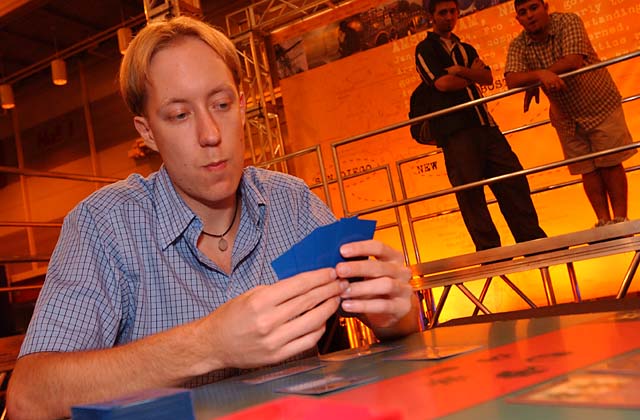 Jorstedt played a Metalworker, while Zink played a swamp followed by Ancient Tomb and Damping Matrix. The Metalworker produced eight mana, allowing Jorstedt to play Bosh, Iron Golem followed by Tangle Wire. Vampiric Tutor was followed by Zink's first mountain of the game, and the German couldn't do much more with his lands tapped down from Tangle Wire. Jorstedt played Lightning Greaves and seemed very happy as he put it on Bosh, but then realized he couldn't make the play because of the Matrix. Zink finally started to put up some resistance, playing a land and a Chrome Mox, followed by Rack and Ruin to kill Bosh and the Metalworker. Jorstedt summoned a new Metalworker and ended his turn, while Zink just played a Prospector. The Metalworker attacked for a point of damage, and was joined by another. At this point, despite all the powerful plays each deck is capable of, the game came down to Jorstedt's 1/2 beaters trumping Zink's 1/1 Goblin. After a few turns of back and forth attacks, Shattering Pulse with buyback destroyed Damping Matrix. Now the Metalworkers stopped attacking, and activated to put out a Mindslaver and activate it. At four life with two painlands and an Ancient Tomb in play, Zink lost on his upkeep when he was forced to tap them.

Zink mulliganed to six, although he took some time before deciding not to go down to five. With that decision made, Jorstedt took a mulligan as well. He played a second turn Grim Monolith, and Zink shook his head as he put Vampiric Tutor under Chrome Mox and summoned Goblin Piledriver, not playing a land on the turn. Tinker turned the Monolith into Bosh, and Jorstedt made his board position excellent with Tangle Wire and Welding Jar. It seemed he had the game locked up, but Zink had the right answer in Diabolic Edict. Jorstedt went searching for more threats with Thirst for Knowledge, and Tinkered an artifact land to get Platinum Angel. With a Welding Jar it was already well protected, but Jorstedt decided to make it even more resilient by Tinkering for Lightning Greaves, which also let it attack right away. Zink essentially needed another Edict to get out of the situation despite Damping Matrix nullifying the Greaves. The Edict never showed up, and Jorstedt took the match.