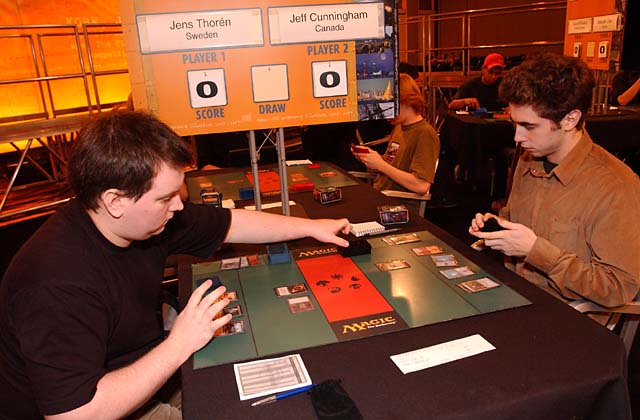 mood was rather subdued as the players sat down to shuffle up for this match. Jens Thoren, otherwise known as the Silent Assassin, was quiet as usual, in addition to looking a little peaked. He claimed it wasn't from a night out on the town, but given that last night was Halloween and we're in New Orleans, who really knows. He brought Team Punisher's build of Blue/Red Tinker Stax to the table. Jeff Cunningham, on the other hand, was playing Psychatog with a splash of Red. 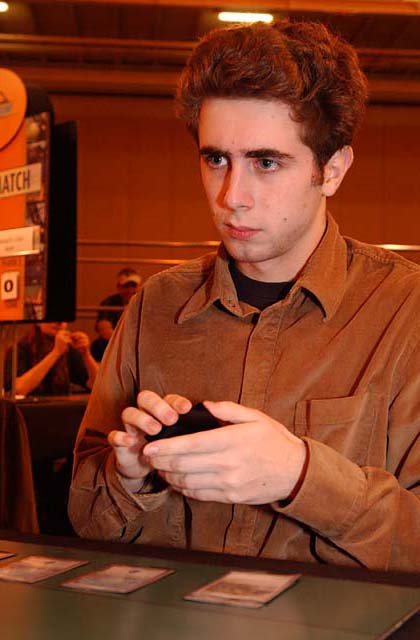 Jeff won the right to go first when Jens selected the hand that wasn't holding the glass bead. He led off with Island and passed the turn. Jens had City of Brass and a Goblin Welder, which was fine with Jeff as he played Engineered Plague on turn two off of a Psychatog-imprinted Chrome Mox. Jens came back with Ancient Tomb into Monolith, which fueled his Thirst for Knowledge plus Voltaic Key.

Jeff's third turn was just Bloodstained Mire, but after Jens passed the turn back he Brainstormed, then shuffled the chaff away by searching for a Mountain, and finally Vampiric Tutored. He untapped and put down an Isochron Scepter that was imprinted with Counterspell after Jens resolved a Thirst for Knowledge in response. Jeff finished his turn with two mana up and one card in hand.

Jens placed Masticore on the stack and Jeff chose not to counter, perhaps fearing something worse. Lightning Greaves was next, and that also resolved. Masticore got his groove on with the Greaves and attacked for four, then Jens put down a City of Traitors and nudged the turn.

Cunningham could find nothing worthwhile for his fifth turn, so he just sent it back. Jens paid the Masticore's upkeep with Ancient Tomb and then cast Mindslaver, which Jeff considered worthy of using the Scepter on, tapping an Island and a Mountain and leaving an Island and a Swamp up. No longer fearing Counterspell, Jens went for the Tinker, sacrificing his key. Jeff Brainstormed in response but had to let it resolve, so Jens retrieved Pentavus, equipped it with the Greaves, and sent it into the Red Zone next to the Masticore, taking Jeff to a scant four life.

Jeff, again, had little action, and was forced to just tap three of his four lands and cast Psychatog. Jens simply untapped, didn't forget the Masticore upkeep, and attacked with both creatures to take the first game. 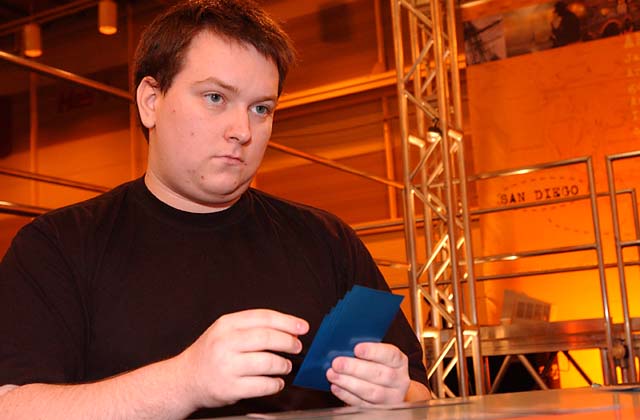 The next game began with a "Good luck" from Jens and a "Thanks" from Jeff, who then led with an Island. Thoren had Ancient Tomb followed by Greaves on his first turn, and Cunningham Brainstormed on end step. This was followed by Bloodstained Mire, which fetched a mountain that was used to pay for an Ice on Thoren's land during upkeep. Another uneventful turn passed for Jeff, though on Thoren's turn he killed a Metalworker, this time with the red half of Fire/Ice. He then played his fourth land and cast Fact or Fiction in response to Jens's turn four Metalworker.

The choices were a lone Vampiric Tutor against Polluted Delta, Bloodstained Mire, Swamp and Island, and Jeff chose to take the spell. Metalworker was equipped with the Greaves and immediately tapped to make four mana, some of which paid for a Thirst for Knowledge pitching Seat of the Synod. Another Seat entered play and was immediately Tinkered away. Jeff picked up an island for Daze and the spell was countered.

Cunningham untapped, Vampiric Tutored on upkeep, replayed his Island and said go. The Metalworker was used to cast a Defense Grid, which Jeff responded to by casting Cunning Wish for Shattering Pulse. Jens then played out a Great Furnace and Tinkered that away for Bosh, Iron Golem. Lightning Greaves was equipped and Bosh attacked for six. Jens cast Thirst for Knowledge and then finally passed the turn.

Options were quickly becoming limited for Jeff, who apparently had almost nothing left as he tapped out for a main phase Fact or Fiction while staring at lethal damage (from an attack plus Bosh's ability). The split was: Chrome Mox, Fire/Ice and Counterspell or Energy Flux and Diabolic Edict. Jeff thought for a minute, took the second pile, and then a few seconds later shrugged and scooped up his cards. Game and match to the Silent Assassin.