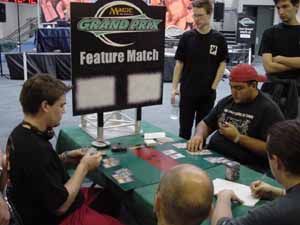 Antonino and Brian have met a number of times before, and Antonino has won them all but as he said, “that was in Limited, and I fancy my chances better there.” This is the first time they’ll have played in a constructed format and Antonino is looking to extend his record whilst Brian is looked for payback.

Brian is playing a Blue and White control deck, geared to beat Goblins before sideboarding with four Silver Knights in the main deck but transforming in games two and three to a deck that’s much better against control. Antonino is playing a Red and White Slide deck with Flamewave Invoker in the sideboard for this match up.

Antonino won the roll and kept his hand, Kibler kept his and Antonino kicked off the match with a Mountain. A few turns in he cast the first spell: A Lightning Rift but didn’t get to use it before Brian cast Akroma’s Vengeance three turns later.

Still early in the game, Antonino cast a morph and lost it a turn later after attacking into Wing Shards. A second face down Exalted Angel came into play on his side. Antonino attacked and left his Angel as a morph and tried to pass the turn but Kibler cycled Decree of Justice and made six 1/1 guys forcing Antonino to cast Starstorm for one.

Two turns later a second Vengeance from Kibler cleared the board and Antonino tried to cast Decree of Annihilation to kill all the land but Brian had a Stifle waiting to stop it.

Antonino’s third morph was countered and both players cycled and played out land for a few turns until De Rosa found an Astral Slide. In his end step Kibler cycled a second Decree of Justice to make nine 1/1 soldiers, untapped and attacked taking Antonino to eleven and looking for answers. He found one and cast a Starstorm for one again, followed by an Eternal Dragon. He attacked a turn later but Kibler had a Wing Shards ready. Wary of Kibler using Stifle to stop the end of turn, return to play trigger of the Astral Slide and losing his Dragon for good, Antonino let the Dragon die – at least could return it to his hand a turn later – and cast a Lightning Rift.

For three turns Antonino cycled and dealt damage to Kibler, as he could only draw land. Finally, on five life, Brian drew an Eternal Dragon and cast it. “This guy’s very timely.” “Timely?” asked De Rosa. Brian sighed, “as in I would have liked to have seen him a long time ago.” De Rosa agreed and cycled three cards in a row to take the game.

Antonino bought in Wing Shards, Flamewave Invoker, two Akromas, a Decree of Annihilation and one Temple of the False God. He took out Gempalm Incinerators, Spark Sprays and Astral Slides. Kibler bought in Stabiliser, Decree of Silence, Chromeshell Crabs and Sanctifies.

Brian chose to play first and kept his hand, and Antonino kept too. Kibler started well with a turn two Stabiliser. “That’s fair,” Antonino exclaimed – knowing he was in trouble. Both players dropped turn three morphs and Antonino turned his over and flew over for four with his Exalted Angel. Kibler attacked back, but didn’t unmorph his guy. “Maybe it’s not an Angel,” De Rosa offered. 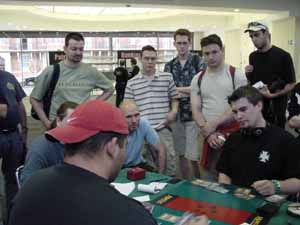 The next turn he attacked again and played out a Flamewave Invoker and, in his end step Kibler unmorphed his Chromeshell Crab and swapped it with De Rosa’s foil Angel. “That’s very Shiny.” “Yeah, but you should have taken the Invoker,” Antonino said. “You think it’s distracting me, and that’s why I took it?” He untapped and sacrificed a Flooded Strand to fetch another Island – taking him to ten life. “Two kabooms from Invoker away,” Antonino noted. “I may get to attack you though,” Kibler replied and announced a Decree of Silence: “I get the talking stick, you don’t.” Antonino didn’t look too pleased, “firm but fair.” Kibler attacked with Antonino’s Angel to take him more than two ‘kabooms’ away from death.

Antonino put a brave face on it and attacked again, knocking Brian to nine and passed. Brian attacked, went back up to 13 and cast an Angel of his own. In Kibler’s end step Antonino cast a Starstorm to add a counter to the Decree of Silence then cast an Invoker to add another counter in his own turn.

A spectator asked Antonino how it was going. “I’m not winning,” was his reply as Kibler attacked for eight to put himself safe and De Rosa into the danger zone. “Come on, have some confidence,” was Brian’s reply, knowing he had the game in the bag. “Well, I’m not winning this game.” He didn’t, his last spell adding the last counter to the Decree of Silence before his own Angel beat him up.

Kibler made a few changes now that he was drawing, taking out his Angels and bringing Wing Shards back in. “If he plays Angels he can win the race, so I have to be careful of them.” De Rosa left his deck alone.

The winner of this game would almost certainly be in the top eight and the loser would have to win his next match and hope for good tie-breakers. Both players kept their opening hands and Antonino chose to play.

Antonino played a turn two Lightning Rift and Brian cycled an Eternal Dragon for land while De Rosa was tapped out. The next turn Antonino started the damage rolling by cycling a Dragon of his own, and Kibler took his chance to cycle a second.

Each turn both players played out land and Antonino cycled cards to deal damage to Kibler and it became clear that Brian wasn’t drawing the Islands he needed to play the handful of Blue spells he’d accumulated. Brian eventually cast his Dragon, but was on only twelve life – plenty you’d think if only Antonino hadn’t cycled taking him to ten and cast a second Rift the very next turn. Brian’s Dragon flew in taking Antonino to 15, but Antonino had a handful of cycling cards, asked a question about Stifle to make sure he would win, and cycled three cards to do the final 10. Leaving Kibler with one Flooded Strand in play, a handful of Blue spells and needing to win his last match of the day for a chance at top eight.