Pro Tour regular Jun Nobushita, who has a reputation for playing himself out of the Top 8 at tournaments, played his NecroDonate deck against Kazuya Hirabayashi's Survival deck. Hirabayashi is not well known outside of Japan but he did go 6-0-1 on the first day of Pro Tour New York in April of this year. 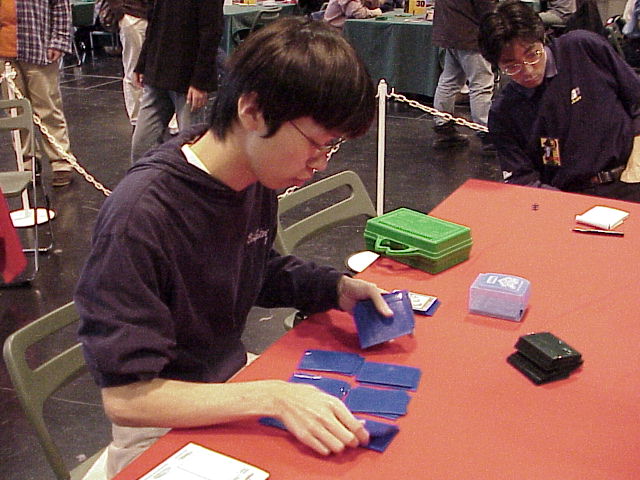 Hirabayashi chose to go first but unfortunately had to mulligan twice. Nobushita's opening hand was strong with Necropotence, two Illusions of Grandeur, Mox Diamond, Duress and two land. He Duressed an Opposition on the first turn leaving Hirabayashi with two Land Grants and a Tradewind. Hirabayashi double Land Granted revealing the Recurring Nightmare he just drew. All of this was moot once Necropotence came into play on turn two for Nobushita with the help of a Mox Diamond. Drawing ten extra cards on turn two remains a good play even in the 2000 Extended environment!

Nobushita rapidly selected the cards to discard at the end of his turn and followed Necro with a turn three Illusions of Grandeur giving him 20 life - but not for long! He spent all 20 life to draw 20 additional cards in order to make sure he would have enough Force of Wills to handle anything Hirabayashi could throw at him. He also kept a City of Traitors in case a surprise Wasteland made an appearance. Hirabayashi, at a 32 card disadvantage, wisely chose to concede.

The second game started much better for Hirabayashi he played a first turn Birds of Paradise. Nobushita's opening hand contained five land, Morphling and Vampiric Tutor. Nobushita drew into a Necropotence but had a hard time keeping up with all the things going on on the other side of the table. Hirabayashi cast a Quirion Ranger, Survival of the Fittest, cycled through three creatures including Squee and Krovikan Horror to get a Dwarven Miner that began tunnelling through Hirabayashi's Badlands on turn four after the Necropotence was countered by Force of Will (discarding Opposition). 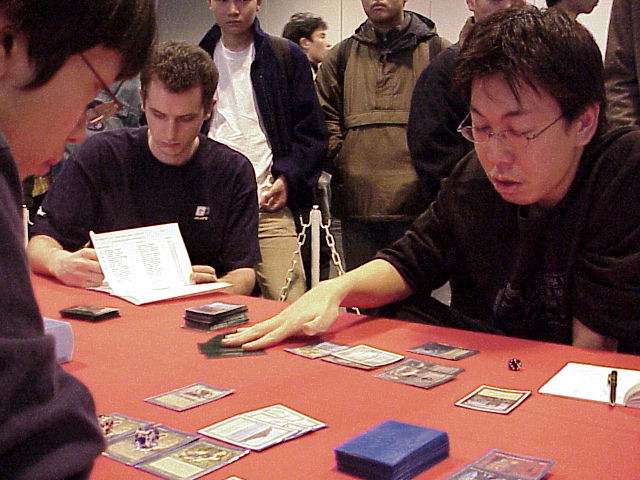 Nobushita Tutored for a second Necropotence and got it into play the next turn but by the time he drew the usual extra 11 cards, Hirabayashi had six creatures in play including a Tradewind and a Quirion Ranger allowing him to return two permanents a turn and gain complete control. There are very few cards that can get a person out of this sort of position, but lucky for Nobushita, Firestorm is one of them and Firestorm was in his hand. With the extra cards from Necropotence, Nobushita discarded seven cards to Firestorm in order to clear the board and deal some direct damage to Hirabayashi.

As Hirabayashi began to rebuild through Survival/Squee/Krovikan Horror recursion, Nobushita dropped a Phyrexian Negator and attempted to beat down. Unfortunately the Negator is not optimal against hordes of blockers and it is especially weak against Krovikan Horror. Despite Consulting through 30 cards to get an Illusions in order to gain lots of life and more cards, Nobushita could not play permanents fast enough to handle both the upkeep of the Illusions as well as the Krovikan Horror's pinging ability. With time running out, Nobushita continued to play it out until his only permanent in play was the Illusions that killed him during his upkeep.

Sideboarding was a lengthy affair, despite there only being five minutes remaining in the round. Nobushita's opening hand contained six land and a Phyrexian Negator but with five minutes left and a City of Traitors, that's a keeper! His second turn Negator was much bigger than Hirabayashi's first turn Birds and it looked like he may have been able to get a win. But Hirabayashi had other ideas as he dropped a turn three Tradewind and both players agreed to draw without playing the five extra turns.