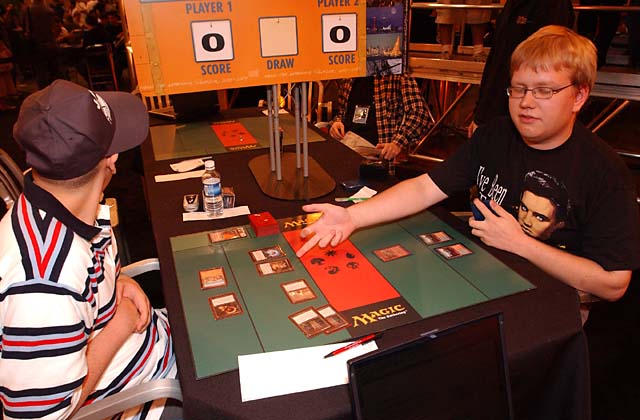 a year ago, Walamies was about to fall off the Pro Tour, and Berkowitz was playing in PTQs. Since then, Walamies came back with a vengeance on the Pro Tour, Masters and in the World Teams competition, with some great finishes that have put him on the Tour for a while, and padded his bank account nicely. Berkowitz has a Pro Tour Top 8 and a Nationals Top 4 along with a great finish at Worlds. Just goes to show you that in competitive Magic, a year can make a world of a difference. 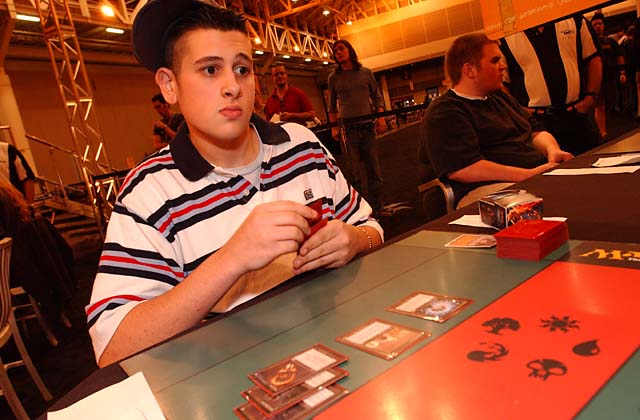 Berkowitz had a huge first turn, sacrificing Crystal Vein to play Grim Monolith, Voltaic Key, another Monolith, Metalworker and Sphere of Resistance. On the following turn he played Rishadan Port, along with Grafted Skullcap. Walamies had a Goblin Welder out, which would make life difficult for Berkowitz if he ever got an artifact in his graveyard. After asking a judge if he could use fast effects after the discard part of the Skullcap resolved (the answer is yes), Walamies played Tangle Wire. Berkowitz took his turn and had to discard Myr Incubator on end step, and begged Walamies to Welder it into play. In fact, that's just what he did, putting it into play and swapping it for the Metalworker. An odd play for sure, especially considering that the Metalworker wasn't terribly efficient with the Skullcap going.

Berkowitz sensed he was being lured into something, so he chose to let the Tangle Wire tap the Incubator on his turn. On end step, Walamies switched the Sphere for a Metalworker. He then untapped and played Lightning Greaves, activating it to attach to his Welder, making it untargetable. An untapped Monolith was switched for a Chalice of the Void in the graveyard, which came out set to zero. With Walamies tapped out, Berkowitz decided it was time to activate the Incubator. As he was searching through his library to decide which artifacts to remove, Walamies surprisingly asked him if he had any outs for a Platinum Angel with the Greaves. After looking through his deck, Berkowitz saw that he didn't have any, and conceded when Walamies revealed the Tinker in his hand, and the Angel in the deck. 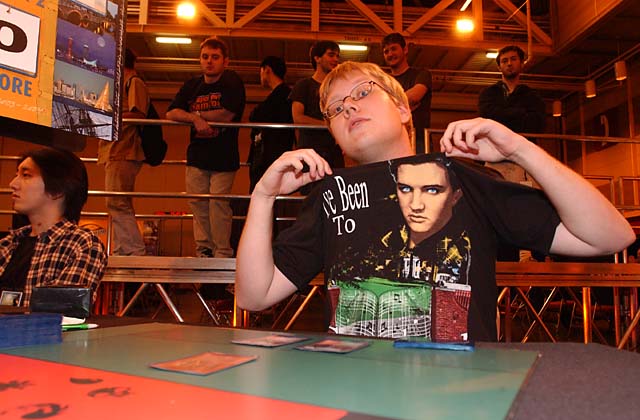 Walamies played a first turn Welder with Great Furnace, which Berkowitz destroyed with Wasteland. Two Voltaic Keys followed a City of Traitors, and Walamies began to beatdown with his Welder, lacking any mana beyond his Shivan Reef. Berkowitz's Tangle Wire was absolutely crippling at this point, although he wasn't doing much to produce threats while Walamies was struggling to get something going. On his next turn he played a Welding Jar, and not much more. Walamies finally found another mana source in City of Traitors, and brought out Lightning Greaves. Berkowitz played a second Welding Jar, followed by Chalice of the Void set to one. Walamies untapped and played Voltaic Key, forgetting about the Chalice.

Berkowitz- "That was a nice play!"

He sacrificed an artifact land to the Welder to bring back Metalworker, gave it the Greaves so it could be activated right away, which let him play Thirst for Knowledge. After that resolved, he played a second Greaves, and put it on his Welder. Berkowitz played Sculpting Steel to copy Tangle Wire, so on his upkeep Walamies tapped mana before the Wire resolved, casting Thirst for Knowledge. Wasteland took out Walamies' only colored source of mana, but he had another Shivan Reef in hand. Metalworker produced some mana, leading to Tinker, which searched out Bosh. The remaining Greaves went right on him, and he attacked for six. On the next upkeep, Walamies threw Bosh to the dome, winning the match.