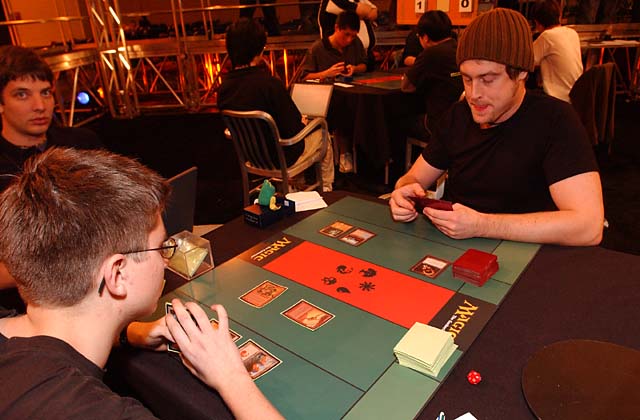 Rickard came into this match with an 11-3 record and in definite Top 8 contention, while Maxime is doing slightly worse at 10-4. Maxime was playing Goblins with Charbelcher, while Rickard was wielding the popular Goblin Welder/Tinker deck.

Maxime won the right to play first, but was forced to take a mulligan. He led with a Mountain and passed the turn.

Osterberg started with a Great Furnace and Goblin Welder. Maxime failed to draw a second land and was forced to end his second turn, still with a lone Mountain. City of Brass came down on Osterberg's side, followed by Lightning Greaves equipping the Welder, which attacked for one. 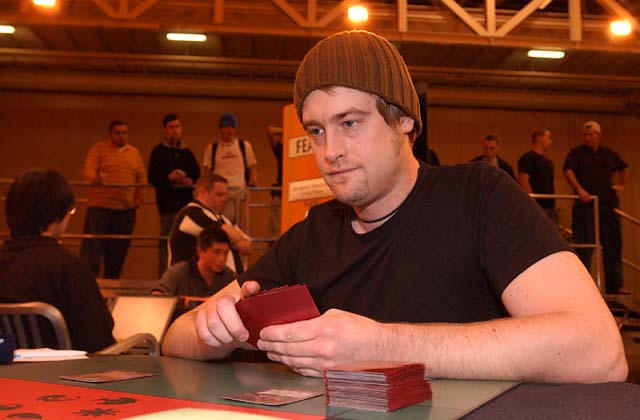 Maxime found a land and summoned a Goblin Piledriver. Osterberg's third turn consisted of a Shivan Reef and a Tinker sacrificing the Great Furnace and finding Platinum Angel. Greaves made its way onto the Platinum Angel and it attacked for four. An untargetable Angel is a hard lock against Maxime's main deck so rather than pretending he had an out, he decided to save time and immediately move onto the next game.

Maxime took out an assortment of Goblins and a Charbelcher for four Rack and Ruins and three Damping Matrices. Three Welding Jars, a Triskelion, a Rack and Ruin and two Shattering Pulses made their way into Rickard's deck.

The players had been quiet during the whole match and they continued that theme as they shuffled up for Game 2. 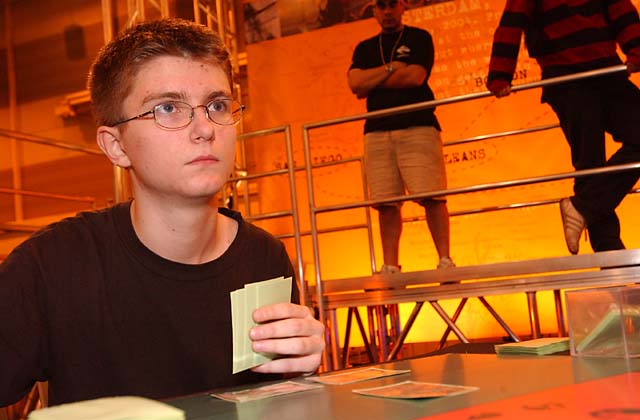 Maxime started off the second game with Mountain, Mogg Fanatic. Shivan Reef and Voltaic Key comprised Rickard's first turn. Maxime's Mogg Fanatic charged into the red zone and then was joined on the playmat by a Goblin Piledriver. Rickard added an Ancient Tomb to the table and tapped it and the Shivan Reef, falling to 16, to change his Voltaic Key into a Platinum Angel with Tinker. He then added a Welding Jar as additional insurance against creature kill.

On Maxime's turn, both creatures attacked immediately. Rickard thought about whether to block, then asked how many cards the French player had. Eventually he decided to just absorb the damage himself. Maxime summoned Skirk Prospector and shipped the turn back.

Rickard's land drop was a City of Traitors, giving him access to five mana on his turn. Platinum Angel attacked, dropping Maxime to 16, and then a Lightning Greaves was summoned. In response to an attempt to equip the Angel, Maxime cast Rack and Ruin targeting the Angel and the Greaves. Welding Jar was sacrificed to save the Angel, but unfortunately for Maxime, Rickard cast a second Greaves. Upon seeing that, he dropped his cards onto the table and conceded.

A lot of players don't like Platinum Angel because they claim it's too fragile, but this was definitely a showing of the card's raw power. Rickard moves to 12-3 and might be a lock for top 8, while Maxime falls to 10-5.