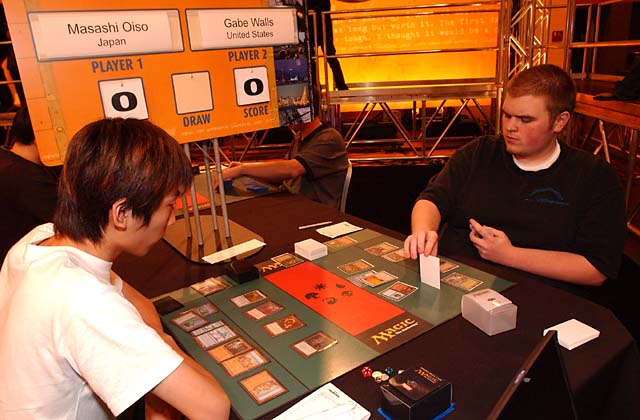 players need a win here, and a win next round to make Top 8. If Walls pulls it off, it will be his third Top 8 in a major individual event in a row- he did it at U.S. Nationals, then at Worlds.

Oiso played Metalworker on turn two, and Walls played Oath of Druids. Metalworker activated to show a hand filled with artifacts, one of which was a Voltaic Key, which brought the mana count up to twenty.

Walls- "This format is so good!" 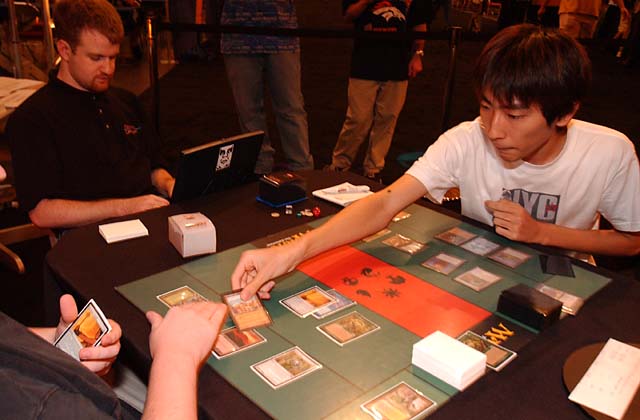 With all that mana to work with, Oiso played a Dynamo and a Monolith, then summoned a Masticore to kill itself off along with the Metalworker, ensuring that the Oath would not trigger. Walls played a Chrome Mox, but missed his third land drop. On the following turn he played Isochron Scepter imprinted with Counterspell, but Oiso's two Rishadan Ports kept it from being a problem. Eventually Walls found a third land, and played a second Scepter set to Fire/Ice. Soon he had it running as an Icy Manipulator, drawing a card with each activation. The game slowed down drastically, as Oiso couldn't do much with Walls' two Scepters active. At this point, the Scepter started to shoot Oiso for two damage a turn. Eventually, he activated his Mindslaver, as Walls turned to Mark Rosewater and stared him down.

Rosewater- "Because it's fun!"

Krosan Reclamation shuffled back in the Mindslaver, and Oiso set a third Scepter to Counterspell. With Walls all tapped out, Oiso cast Upheaval, and replayed more than enough artifact mana along with a Masticore. With the help of Chrome Mox, Walls was able to bring the Oath right back out. The Masticore attacked for damage, and then shot itself down so that the Oath wouldn't trigger. Walls played a Scepter with Fire/Ice, and shot Oiso down to four life. Two turns later, the game was over.

Walls- "God, Magic is dumb. That was the most one-sided game I've ever seen, and I still won." 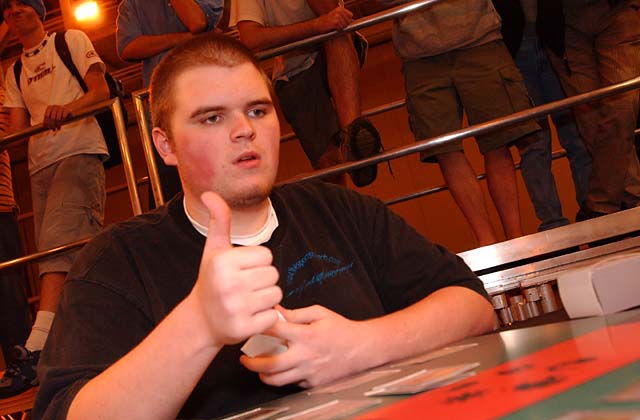 Walls played Treetop Village, and Oiso had Grim Monolith. Tangle Wire came out a turn later, along with Metalworker. This led to Voltaic Key and a Dynamo, but Oiso had no threat to take advantage of Walls being tapped out. Walls used Cunning Wish to search out Shattering Pulse, and on the next turn Oiso used Tinker to get Planar Portal. He had enough mana left to activate it, and searched up Welding Jar, which came right into play. Walls took his turn, and played Isochron's Scepter, putting Shattering Pulse under it. Oiso used the Portal to get Tinker, which found Mindslaver. Once it was activated, Walls conceded.

Walls started off by going through his deck with Brainstorm and a sac-land, while Oiso played Grim Monolith. Thran Dynamo came out on the following turn, and Walls used Cunning Wish to get Shattering Pulse on end step. He then untapped and played Isochron Scepter, which Oiso responded to with Stifle. Walls added Counterspell to the stack, so the Scepter came into play and was set to Shatter something every turn. Oiso had an answer, and played Mindslaver. The Scepter destroyed itself, and Chrome Mox came into play with Cognivore under it. Oiso summoned a Metalworker on his next turn, and started to attack with it. A second Metalworker was played a few turns later, and Walls cast Cunning Wish to get Fact or Fiction. He cast it on upkeep after a Rishadan Port activation, and the piles presented were Oath of Druids/Fire-Ice and Fact or Fiction, Isochron's Scepter and Yavimaya Coast- Walls took the two card pile, and played Oath of Druids. Oiso now took his turn and activated a Mindslaver, then cast Upheaval. On Walls' turn, Oiso forced him to discard down to nothing but lands and a Chrome Mox. A Stroke of Genius for thirteen was the nail in the coffin, leading to Tinker for Planar Portal. This put him in complete control of the game, and Walls conceded rather than sit through more agony.