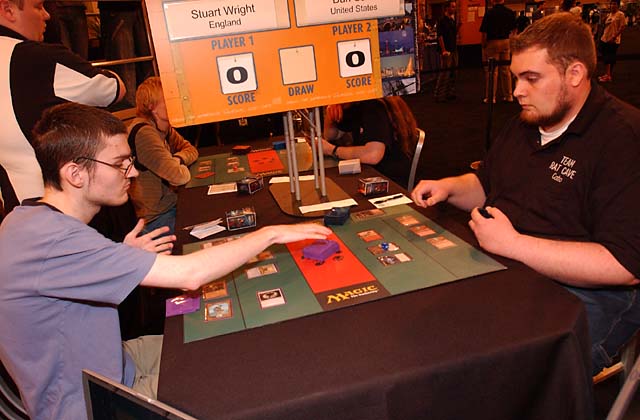 Wright came into this match with an 11-3-1 record piloting the popular Mana Severance/Charbelcher combo deck. Dan Cato was also doing just fine at 11-4 with a new build of Red Deck Wins that uses a full complement of four Slith Firewalkers. The winner of this match would advance to the Top 8.

Dan began the match with the classic Red start of Mountain, Jackal Pup; Stuart then mirrored him with a Blue opening of Island, Sleight of Hand.

Dan's next turn consisted of Bloodstained Mire, fetching a Mountain, an attack for two, and a fairly irrelevant Cursed Scroll. Stuart then drew his card and started to ponder his next move.

"With your deck you actually have something to think about, with mine it's just cast guys, push them into the red zone…" - Dan 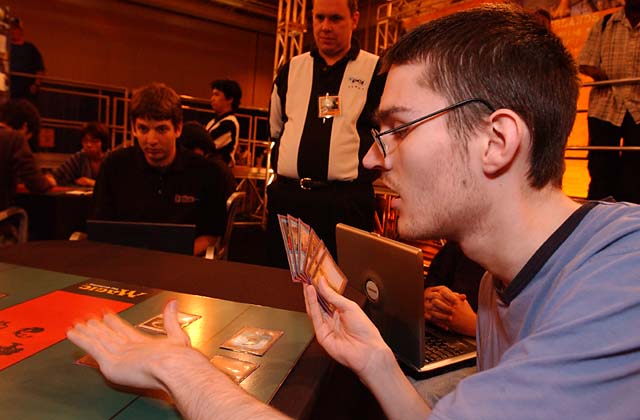 Stuart played an Ancient Tomb, tapped it to pay for a Talisman of Progress, and then tapped that and his Island for a Grim Monolith. Dan's response was to sacrifice another Bloodstained Mire, again for a Mountain, and place down a Tangle Wire.

Dan attacked with Jackal Pup and Firebolted Stuart's dome, bringing him to a somewhat precarious eight life. On Stuart's upkeep, he Ported the Ancient Tomb, leaving Stuart with only an Island untapped in his main phase. He sacrificed Flooded Strand, grabbing an Island and then resolved a Mana Severance, removing the rest of the lands in his deck from the game. It was now or never for Dan.

Dan brought in four Pillages and two Rack and Ruins while taking out two Volcanic Hammers and four Cursed Scrolls.

Stuart stared at his hand thoughtfully for about a minute before he announced that he was willing to keep. Dan, on the other hand, mulliganed with, "I'm not [keeping this]…I'm not gonna beat you down with one Port." 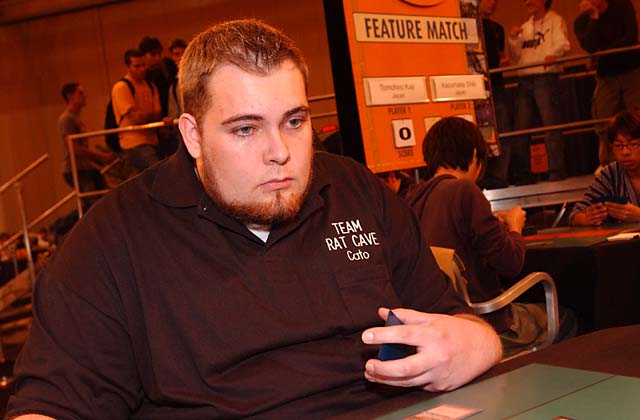 Stuart started things off with Ancient Tomb that tapped for Talisman of Progress. Dan went straight for the dome with "Mountain, Firebolt you" to which Stuart responded, "Well I Firebolted myself on turn one, so it seems fair."

Mox Diamond and Crystal Vein hit the board, followed by an ominous Goblin Charbelcher.

Dan could only play a Rishadan Port and pass the turn back. On end step, Dan Mystical Tutored for Mana Severance. His Ancient Tomb was Ported on upkeep, preventing him from winning that turn, but with the lack of pressure from Dan's side of the board, that wasn't a problem. He simply Mana Severanced out all his lands and ended his turn. All Dan could do was Wasteland the Ancient Tomb, but Stuart still had the three mana necessary for the kill.

Stuart tried unsuccessfully to convince his opponent of the virtues of the extra card from drawing first. Dan, after making clear his intent to play first, kept a hand of Rishadan Port, Wasteland, three other lands, Jackal Pup, and Grim Lavamancer. Wooded Foothills searched out a Mountain and Jackal Pup made a quick appearance. A bit of déjà vu was found when Stuart again matched with Island, Sleight of Hand. Dan played down his Rishadan Port and then chose to Port Stuart on his upkeep.

A brief pause was experienced as part of the Feature Match table fell apart.

Stuart allowed his Island to be tapped and then played a Grim Monolith off an Ancient Tomb. Jackal Pup attacked and Dan used his Wasteland to destroy the Tomb, followed by again Porting Stuart on upkeep. Stuart tapped it this turn and cast Mystical Tutor. He reflexively paused as if to ask if that could resolve.

Stuart fetched Mana Severance, then played out a second Island and nudged the turn. Jackal Pup attacked again, taking the blue mage to twelve, and Dan had yet another disruptive card in the form of Tangle Wire.

"This is making my deck even more complicated. I'm not appreciative of this," said Stuart as he thought about how he could win this game.

His first step was to float five mana into his draw step and then Mystical Tutor for a Tinker, followed by the usual play of untapping his Monolith. At that point he could only play an Island and be done.

Dan attacked for two, putting Dan at ten, and added a second Jackal Pup to the table. Stuart used his fresh Island to cast a Brainstorm on end step, then floated four during his upkeep and untapped the Monolith. At this point Dan was feeling confident, as the top of his deck had been kind to him this game. He was sitting on both Rack and Ruin and a Blistering Firecat.

Stuart made his move, playing out Mox Diamond and City of Traitors, then Mana Severanced, preparing to win next turn by casting Charbelcher and immediately activating it despite the Tangle Wire.

With only three lands, Dan was forced to tap one of his Jackal Pups so that he would still have access to three mana if he didn't draw a land. He did draw Bloodstained Mire, but with one of the Pups tapped down, casting Blistering Firecat would only result in nine damage, which was one short. Without the option to kill his opponent, he wisely chose to keep himself alive by targeting the Monolith and the Mox Diamond with Rack and Ruin.

Without the extra mana and permanents, Stuart was crippled under the Tangle Wire. He had to pass the turn back, at which point Dan summoned his Blistering Firecat and abruptly ended it.