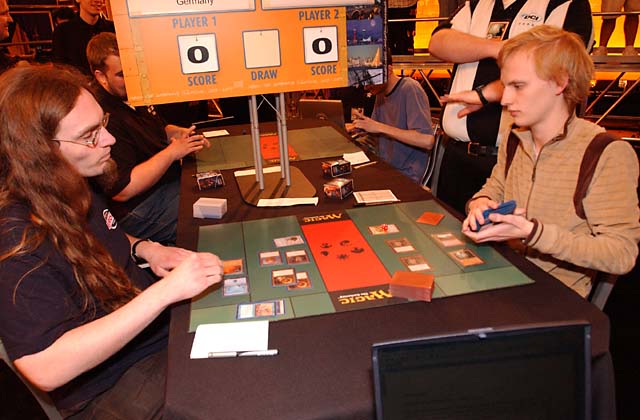 of these players will get to "live the dream" in the Top 8 tomorrow. This is Ho's fourth Pro Tour, but he hasn't had any notable finishes except for a Grand Prix Top 8. This weekend is Carlsson's first Pro Tour, and it would certainly be a great accomplishment to make it to Sunday on the very first try. 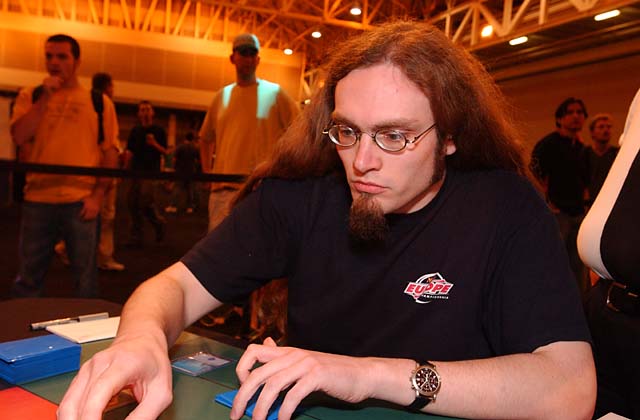 Carlsson started off with a first turn Grim Monolith, and Hoh played Voltaic Key. A second Grim Monolith gave Carlsson plenty of mana, and Pentavus came out on turn two. Hoh took his turn and played a Monolith, a Dynamo, a second Key, Damping Matrix and Tinker, sacrificing the Matrix to put Bosh, Iron Golem into play. Carlsson played a Welder, along with Tangle Wire. Bosh got through for six damage, and Hoh played a red source in Shivan Reef, and had enough mana to activate the artifact "Chuck" as well. 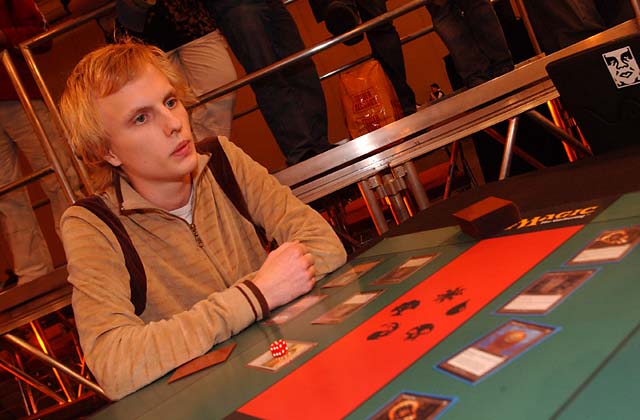 After some thought, Carlsson took a mulligan. Hoh played a Key, and Carlsson brought out Metalworker. Carlsson didn't have any explosive play when it became active, and instead played a Welding Jar and a Grim Monolith, then attacked with Metalworker. Hoh cast Rack and Ruin, targeting the Metalworker and the Monolith. The Monolith got to stick around thanks to Welding Jar, but the regeneration left it tapped where it wouldn't do much good. This was likely a mistake, as both players forgot that regenerating an artifact causes it to tap, and had to be reminded. In consequent turns, Carlsson was stuck with just two Cities of Brass, and spent every turn drawing and doing nothing else. Metalworker along with Tinker got Mindslaver into play and activated, while Hoh played more Voltaic Keys to have all four copies out on the table. Carlsson's hand contained two Rack and Ruin, Mindslaver and two Thirst for Knowledge, and he then drew Welding Jar. Hoh used his Voltaic Key to untap Carlsson's Monolith, and cast Thirst of Knowledge, sending Mindslaver to Carlsson's graveyard. Hoh used his other Keys to keep untapping the Monolith, and cast the other Thirst of Knowledge, this time discarding Goblin Welder and City of Traitors. Hoh played Greaves and Chromatic Sphere out of Carlsson's hand, and used both Rack and Ruins to destroy an artifact land, Grim Monolith, the Greaves and Sphere. Carlsson was now out of resources, and Hoh's Mystical Tutor for Stroke of Genius was enough for Carlsson to concede.

After the match, Carlsson pointed out that Hoh should have put the Greaves on the Welder, and started Mindslaver recursion.