Rob Dougherty, the owner of Your Move Games and one of the leading members of that team, faced off against Jin Okamoto, an established Japanese star.

Rob brought Angry Hermit to the table, a deck that was weakened by the loss of Entomb but still proved to be strong enough to make the cut here in New Orleans. His version is special in that it runs four Putrid Imps and four Akromas as the bulk of its creature base. Unfortunately, he was a bit of an underdog against Jin's Goblin Recruiter/Goblin Charbelcher deck, as the Hermit deck has traditionally had trouble against decks that can kill the Hermit Druid early. Jin has the extra tech of Seething Song, which allows him to pull off even more explosive starts and makes the large mana requirement of the Charbelcher a little more manageable. 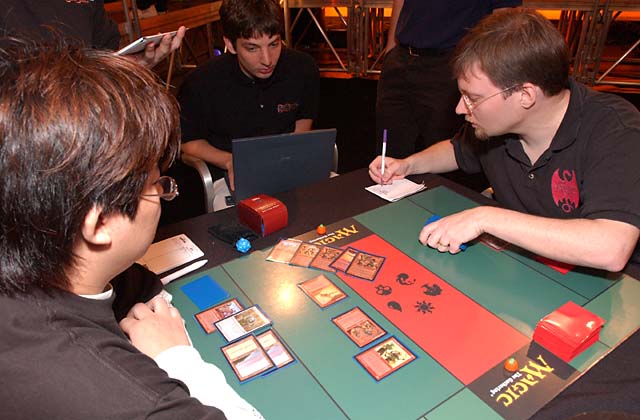 The players shuffled up in silence. In between them, flanking the red zone, sit two small pumpkins in honor of Halloween. They rolled for first, with Jin taking it with a 17 and duly choosing to play. Good lucks were exchanged, and the players dealt out their hands.

Jin looked thoughtfully at his hand for a while before choosing to keep. On his first turn he proceeded to use most of it: Mountain, Chrome Mox (pitching Goblin Ringleader), leading into Skirk Prospector, Mogg Fanatic. Dougherty's first turn consisted of simply a Llanowar Wastes.

He arranged the Goblins and passed the turn. Rob played a second Llanowar Wastes and placed a Hermit Druid onto his side of the table. Not the strongest play against an active Mogg Fanatic, but what else can a Hermit deck do?

Jin played out an Ancient Tomb, giving him access to five mana, and cast Ringleader, getting the other four goblins that he showed earlier. He cast another Fanatic and immediately sacrificed it to kill the Hermit, while the rest of the goblins attacked for five damage, taking Rob to twelve.

Rob put down a Tarnished Citadel and tapped out for Uktabi Orangutan, destroying the Chrome Mox. Unfortunately in this format it's not enough to follow the traditional pattern of land, spell, land, spell. The goblins showed up in the form of a Warchief and two Piledrivers, leaving Rob with no outs and the Japanese player with a turn four kill.

While sideboarding, Jin pulled out an assortment of Goblins (Gempalm Incinerator, Goblin Sharpshooter, Ringleader and Piledriver) from his deck and added in two Oblivion Stones and two Goblin Bombardment. Rob sided in three Chills, two Engineered Plagues, and a Naturalize. 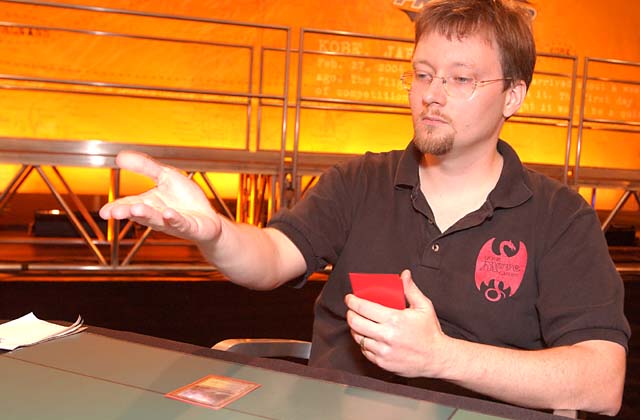 Rob checked out his hand, sighed, and then announced that he'd keep it. Jin, staring at a hand of lands, Chrome Mox, Oblivion Stone and Goblin Piledriver, opted to ship his hand back for a new six.

Rob again started off with only a land, while Jin mirrored his first turn from last game with Mountain, Chrome Mox, Skirk Prospector, Mogg Fanatic. On end step, however, Rob Vampiric Tutored, fetching Engineered Plague. He imprinted a Chrome Mox with Reanimate and dropped a Plague on Goblins, putting a serious dent in Okamoto's strategy.

Rob untapped and laid a second Engineered Plague, again naming Goblins. This was important as it shuts down the last of the creatures in Jin's deck, meaning that he now couldn't win even with Warchiefs and Piledrivers.

Jin then cast one of his Goblin Charbelchers, presumably the only victory condition left in his deck, and passed the turn back with two cards in hand. Rob was still stuck on two lands and his Mox, but had a mainphase Naturalize for the Belcher.

Jin drew and said go, followed by Rob doing the same. Jin played a Mountain and cast a Goblin Matron, which fetched a Gempalm Incinerator on her merry way to the graveyard. On end step, Rob cast Worldly Tutor, fetching a Putrid Imp to Jin's evident surprise. Putrid Imp resolved and Rob pitched Akroma, which was immediately brought back into play with Exhume.

In the two turns he had remaining, Jin failed to find the Charbelcher that he needed to combo Rob out. Putrid Imp took it home (with a little help from Akroma) and the players went to game three.

Jin took out the Oblivion Stones and Goblin Bombardments for four Goblin Goons. 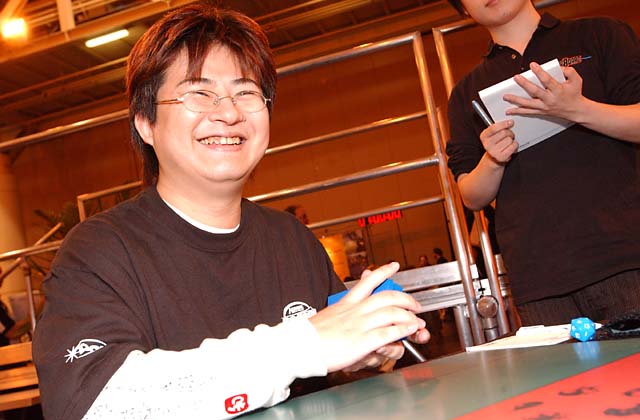 Again the players shuffled their decks in silence. Jin drew up and kept a hand of two Goblin Matrons, Chrome Mox, Goblin Charbelcher, and land. Rob was forced to mulligan but kept his next hand of Vampiric Tutor, Reanimate, Chrome Mox, Exhume, and two lands.

The goblin player played a mountain, attacked for one, and cast Goblin Charbelcher. With the Recruiter in his hand, this represented a turn three kill. If he played a land next turn, Jin can cast Goblin Recruiter, stack all of his goblins on top of his deck, and immediately activate the Charbelcher for the kill.

Rob Vampiric Tutored on end step, falling to sixteen and wisely retrieved Uktabi Orangutan. Now the only question was what to pitch to the Chrome Mox. He chose Reanimate, then played Yavimaya Coast and the aforementioned Orangutan, destroying the Charbelcher.

Jin drew, stared at a hand of lands and a Goblin Recruiter, and placed the Recruiter on the table, searching up the twenty-two goblins left in his deck and arranging them all on top of his deck. Rob drew, thought for a small while, and said go. Jin cast Ringleader, revealing two Piledrivers, Goblin Warchief, and Gempalm Incinerator. He Incinerated the Orangutan and attacked for two.

Rob drew and said go, choosing not to play the lands in his hand because he simply didn't have any action with which to follow them up. Jin played his second Ancient Tomb, cast Goblin Warchief, Goblin Piledriver, and Goblin Goon, then simply attacked for the win.